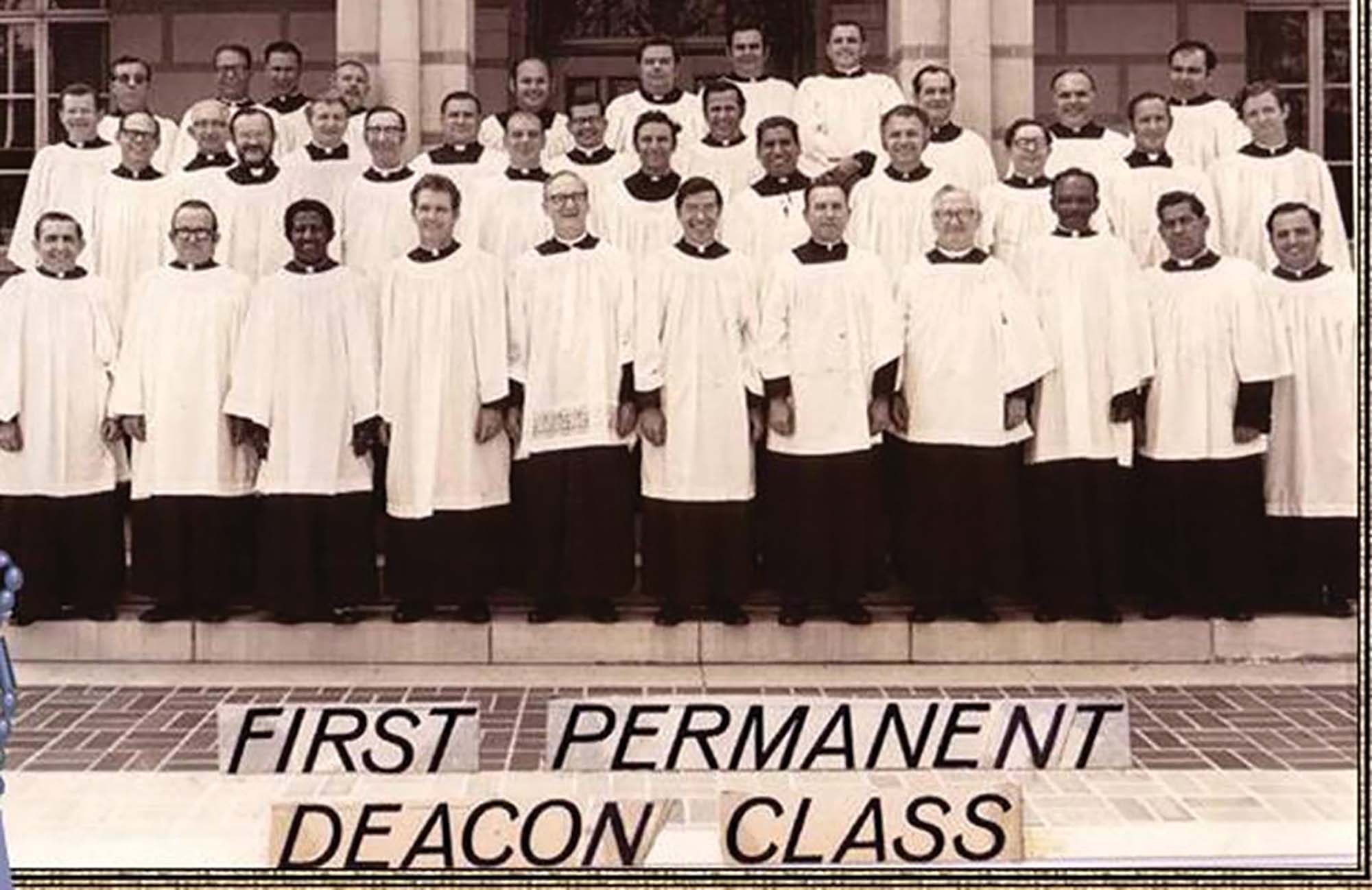 Deacons ordained for the Archdiocese of Galveston-Houston from the first diaconate class of 1972 had 38 members, including George Sheltz Sr., the father of the late Auxiliary Bishop George A. Sheltz. (Photo by Archdiocesan Archives)

HOUSTON — A group of deacons, now mostly in their 80s, recently celebrated being among the first diaconate class of 1972 ordained in the Archdiocese, sharing Jesus throughout their lives for the past 50 years.

They came from all walks of life and education, from a printing press manager to an engineer. They thought themselves unworthy of being ministers who could preside over Sacraments to “baptize, marry and bury” their families and fellow parishioners.

But they followed God’s call. Only seven of the original class of 38 ordained remain living — Deacons Emiliano Gonzales, Paul Hunsucker, Alvin Matthys, John Pistone, Thomas Richards, Phil Wiles and Dale Steffes. Now the diaconate program these past 50 years has blossomed into almost 400 deacons serving among the 146 parishes and other ministries, including prisons and hospitals within the Archdiocese.
Daniel Cardinal DiNardo celebrated with the deacons at their Aug. 13 annual convocation at St. Mary Seminary off Memorial Drive, where most ministry classes are taught.

Cardinal DiNardo said to an overflowing auditorium, “The past two years have been kind of bumpy. It’s magnificent to see you deacons and your wives!”

“You all are the renewal! You are part of the reforming and reanimating of the diaconate. You do important work,” Cardinal DiNardo told the crowd that included about 300 deacons and their wives, along with 120 volunteers from the ongoing classes of 2023 and 2025. 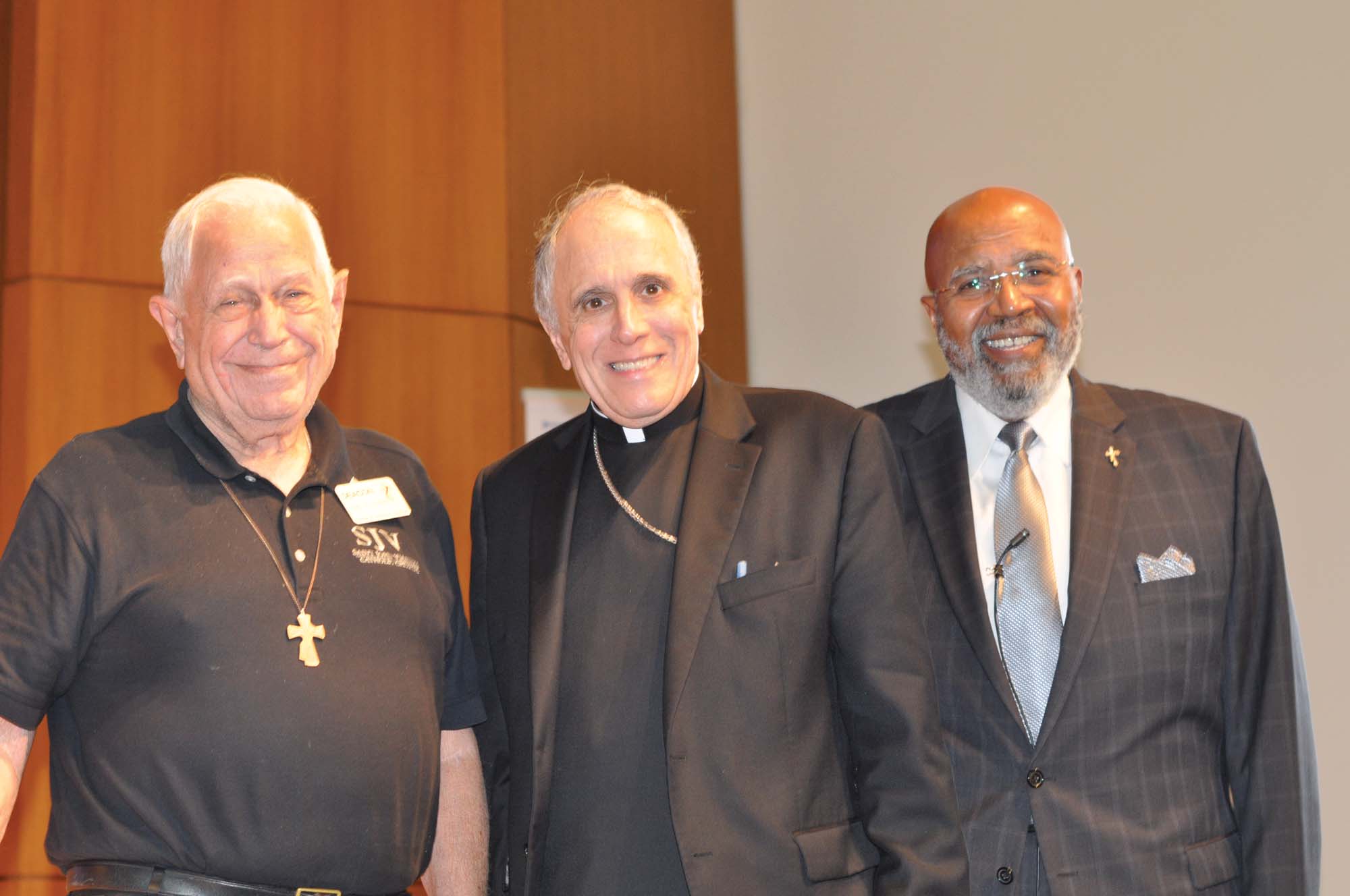 AT RIGHT: Daniel Cardinal DiNardo (center) and Deacon Phillip Jackson, Archdiocesan director of the Office of the Permanent Diaconate, (right) congratulate Deacon Dale Steffes (left) on his 50th anniversary of being among the first ordained in the local diaconate class of 1972. (Photo by Anne Coles)

Deacon Phillip Jackson, director of the Permanent Diaconate, said, “These last few years have been a challenge as we have learned to navigate through a global pandemic” impacting deacons and those they serve as chaplains.

“Hospitals, nursing homes, correctional institutions, immigration centers, and even our access to ships at the ports have been closed to us” and are only slowly reopening, he said.

It was over half a century ago when the diaconate was resurrected. Reforms in the 1960s from the Second Vatican Council had bishops calling to restore permanent deacons in the Church to help the dwindling number of priests, said Deacon Jackson.

Previously, the diaconate, which allows married men in the permanent order, had gone into decline in the fourth century, reduced to an exclusively transitional order of seminarians on their path to priesthood.

Deacon John S. Pistone of Galveston is among the first ordained from the diaconate class of 1972 and remembers his thought and prayer process from 50 years ago.

From the time his pastor announced at Mass that the Church was beginning to look for men for the permanent diaconate, “I couldn’t get the thought out of my mind,” Deacon Pistone said, who was then working at the newspaper printing press for the Houston Chronicle.

“I had major concerns about my ability to do the scholastic work required for the program and my ability to manage my time with work, family and seminary requirements,” he recalled. “I realized that God was continuing to call me to this ministry, and He would provide the tools for me to succeed. It was only my faith in God to do all things that allowed me to begin this journey.”

Deacon Pistone, who served both at St. Mary’s Cathedral Basilica and now at Holy Family parish, also credits his wife Blanche and three of his now-deceased fellow brothers in the diaconate who helped him to succeed.

“Without the assistance of these three very educated men — Tommy Hunter, W.J. Bobb and Richard Haller — I would not have made it through the seminary. We would all ride together from Galveston to Houston twice a week for evening class and once a month on Saturday for all-day classes,” Deacon Pistone said.

“In that one-hour journey, each man would take turns explaining the lessons to me and helped me prepare for that night’s class,” Pistone acknowledged. “God sent me three angels in the form of these men to prepare me and ensure that I completed my formation as a deacon.”
He added, “I had the great honor of being ordained with these three special men at Sacred Heart Church in Galveston by Bishop John L. Morkovsky on June 6, 1972, for the first class of permanent deacons in this diocese.”

Pistone said, “I thank God for the 50 years He has allowed me to serve the people of God. I pray for more time to increase in holiness and become a more perfect instrument to do His will here on earth for as many years as He sees fit to grant me.”

A fellow classmate of 1972, Deacon Dale Steffes of St. John Vianney Catholic Church in west Houston, is also celebrating 50 years of dedicated service. An engineer who worked in the oil and gas industry, Deacon Steffes estimates that he has baptized more than 2,000 and has witnessed more than 300 weddings and hundreds more funerals. He was the only one of the original seven left standing who attended the convocation and was congratulated by Cardinal DiNardo.

When Steffes attended a men’s retreat in 1970 at Holy Name Retreat Center, one of the other men attending, Al Henry of St. Francis Xavier parish, was on the committee starting the Diaconate in Galveston-Houston and shared information with the retreatants. 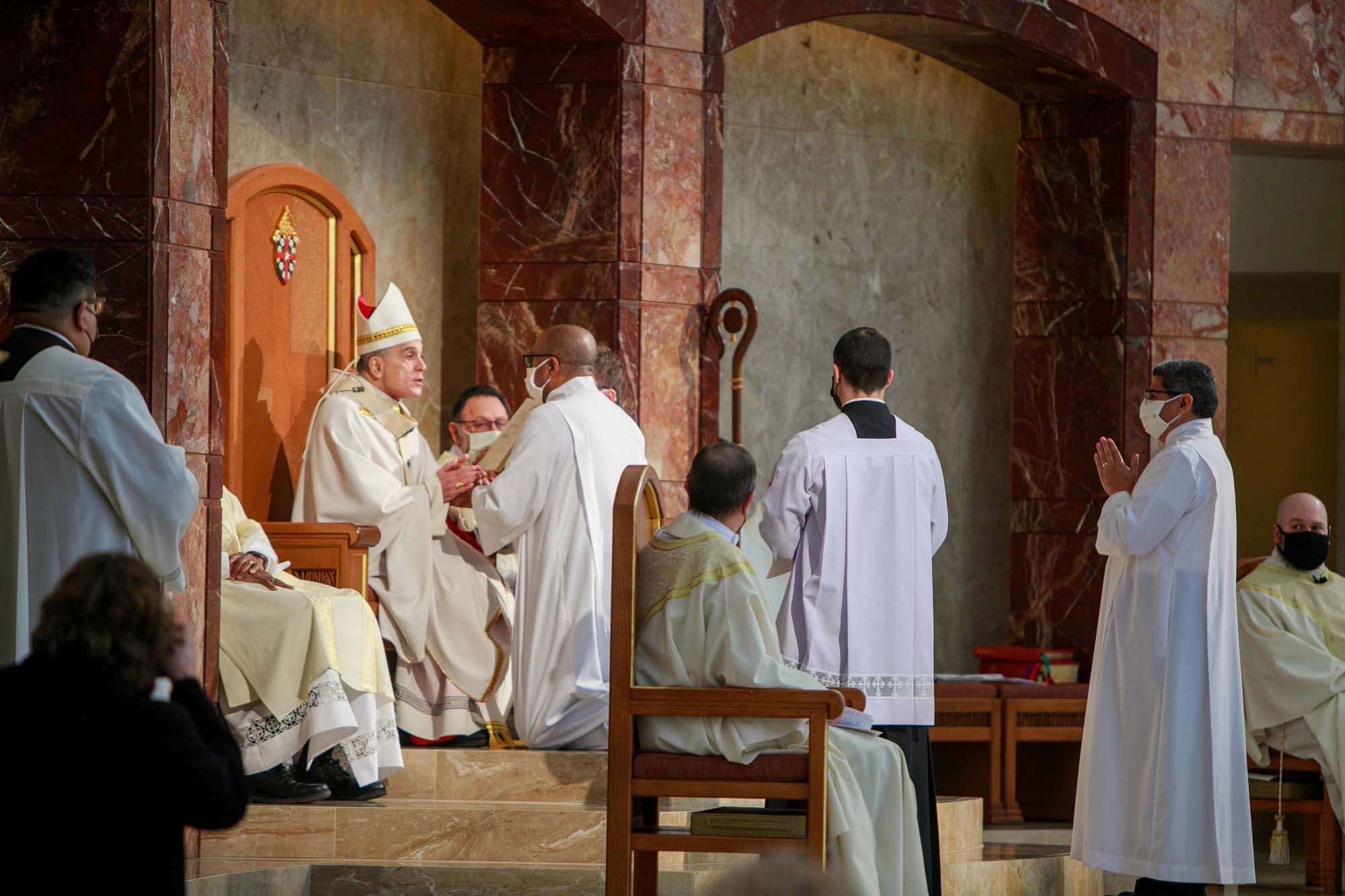 Daniel Cardinal DiNardo, at left, greets a deacon during a Mass of Ordination to the Permanent Diaconate in 2021. Nearly 400 permanent deacons currently serve in the Archdiocese of Galveston-Houston in many roles from parishes to ministries. (Photo by James Ramos/Herald)

Deacon Steffes said after discussing the possible ministry with his wife Sandy, she agreed. They made an appointment with their pastor for approval since the church usually pays for the tuition during formation.

The pastor “said okay, but he said he did not think I would make it,” Deacon Steffes said and chuckled. “Churches get a twofer with deacons because usually, their wives are just as active in church ministry, and we work as a team.”

After two years of classes spread over two nights a week plus some Saturdays, Deacon Steffes earned college credit and was awarded a Bachelor of Theology degree from the University of St. Thomas. He was then ordained by Bishop Morkovsky on June 4, 1972, at St. John Vianney Catholic Church along with two other men of the parish, Deacon Anthony Aiuvalasit and Deacon Fred Brinkman, both now deceased.
St. John Vianney’s current pastor, Father Troy Gately, praised Deacon Steffes to parishioners in a recent church bulletin and during a church celebration for his 50th anniversary.

Father Gately said Deacon Steffes “continues to faithfully lead the Novena to Our Mother of Perpetual Help every Wednesday evening, he is constant in his devotion to Eucharistic Adoration… he is at Morning Prayer every day at 6:30 a.m. and Evening Prayer at 6:30 p.m. Dales continues to reach out to the sick and homebound…He remains a vital and contributing member of the Pastoral Council, is involved with the Knights of Columbus and That Man is You men’s fellowship. He truly has a deacon’s heart of charity.”

“Yet none of this would have been possible without the love, generosity, support, faithfulness and encouragement of his wonderful wife Sandy and their (five) children. Their sacrifices and understanding have enabled Deacon Dale to serve tens of thousands of Christ’s faithful over these 50 years of ordained ministry,” Father Gately said in congratulations to the deacon and his family.

Another attending the convocation, Deacon Gerald DuPont, former director of the local office of the Permanent Diaconate, was the first deacon to serve in that director role previously filled by priests. Still active as president of the International Diaconate Centre, Deacon DuPont said there are more than 48,000 ordained Catholic deacons in the world, sharing their dedication with parishioners and communities.

Recently preparing to travel to England and Wales to speak at their 50th anniversary of the diaconate, Deacon DuPont added, “The United States has 38% of the total deacons in the world. At one point, we had over 65%. More and more, the diaconate is growing in the rest of the world, which is the work that IDC does.”