By Janet Jones, The Catholic Lighthouse 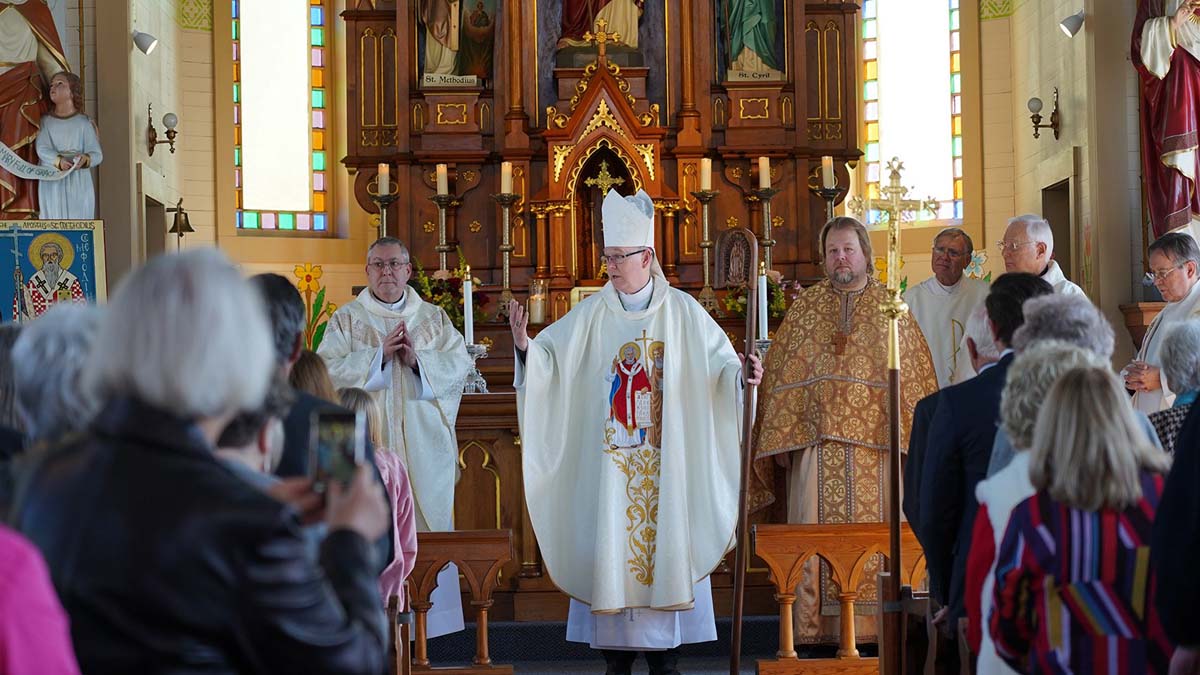 Bishop Brendan J. Cahill of Victoria speaks before the final blessing at Sts. Cyril and Methodius Church in Dubina, Texas, Feb. 14, 2022. Also pictured are Father Stephen Nesrsta of the Diocese of Austin, Texas, left, and Father Elias Rafaj, a priest from St. Basil the Great Byzantine Catholic Church in Irving, Texas, and one of the directors of the Czech Catholic Foundation of Texas. (Photo by Janet Jones/The Catholic Lighthouse)

The church was declared a pilgrimage site during a Mass on Feb. 14, the saints’ feast day in the U.S., with Czech representatives from many Texas cities and fraternal organizations.

The Czech Catholic Foundation of Texas, inaugurated on Feb. 14, 2020, at the Dubina church, coordinated the liturgy and celebration. It was that group, created to preserve and continue the Czech Catholic traditions, that made the request for the designation because the church was the first in Texas to be named for the saints.

“What a tremendous and enduring influence these two Thessalonian brothers had on the Czech lands!” the letter stated, explaining that the contributions of the saints wasn’t only Christianity, but also written language that enhanced all aspects of life for the Slavic peoples.

“The Czech Republic and the Great State of Texas share a long and special kinship. Over the years and through my visits to Texas, I have come to know and develop a fondness and admiration for Texas and its people,” Kmonícek wrote.

“Texans of Czech ancestry have a deep and abiding affinity for the Czech lands and continue to display a robust appreciation for their cultural and spiritual heritage of those who preceded them,” he said. “The communal support which springs from these enduring ties is truly a joy to behold!”

The original Dubina church was built in 1876 on land donated by Joseph Peter Jr., son of early settlers from Moravia. In 1909 that building was demolished in a storm and the present building -- one of the well-known “painted churches” -- was built to replace it.

The church is administered by Father Wayne Flagg, pastor of St. Michael the Archangel Parish in Weimar, Texas.

Father Flagg spoke before the final blessing at the Feb. 14 Mass. He offered some thoughts from his interactions with visitors touring the painted churches.

He read a simple card expressing the appreciation of a young couple who had the opportunity to see the church. The other encounter, he called a “step on your toes” moment, was the visit with four senior adults who came with a girl around age 12, a granddaughter. As they walked out, the child pointed to one of two crucifixes mounted on beams near the back pews and asked, “Who is this man?”

That moment, Father Flagg said, was a realization that there is still a lot of evangelizing to be done.

Bishop Cahill said Catholics need a “continued evangelizing spirit” no matter what the world’s circumstances are. “One of my personal theories is no time is worse than others. Every age is called to renewal and evangelization by Jesus Christ.”

The bishop also said he wanted to impart two special thoughts during the celebration. First, he said, respect for all cultures is an important step to being the bridge between peoples as Sts. Cyril and Methodius were bridge between Eastern and Western traditions.

“The second thing I think about often,” Bishop Cahill said, “is an appreciation for the role of the Holy Spirit in our lives and in the world. The Holy Spirit enlightens our mind, enflames our heart and brings us all to God.”

The bishop was the Victoria Diocese’s vicar general and chancellor when Pope Francis appointed him as an auxiliary for San Antonio in February 2021.

“I offer my prayers in wholehearted support,” Bishop Janak wrote. “I believe that it’s most fitting that this special distinction should be attached to this beautiful church. I’ve had the privilege of celebrating Mass in this historic church on several occasions.

“It has always been an honor to do so. ... I pray many of God’s faithful will embark on a pilgrimage to this church and depart spiritually enriched and personally inspired.”