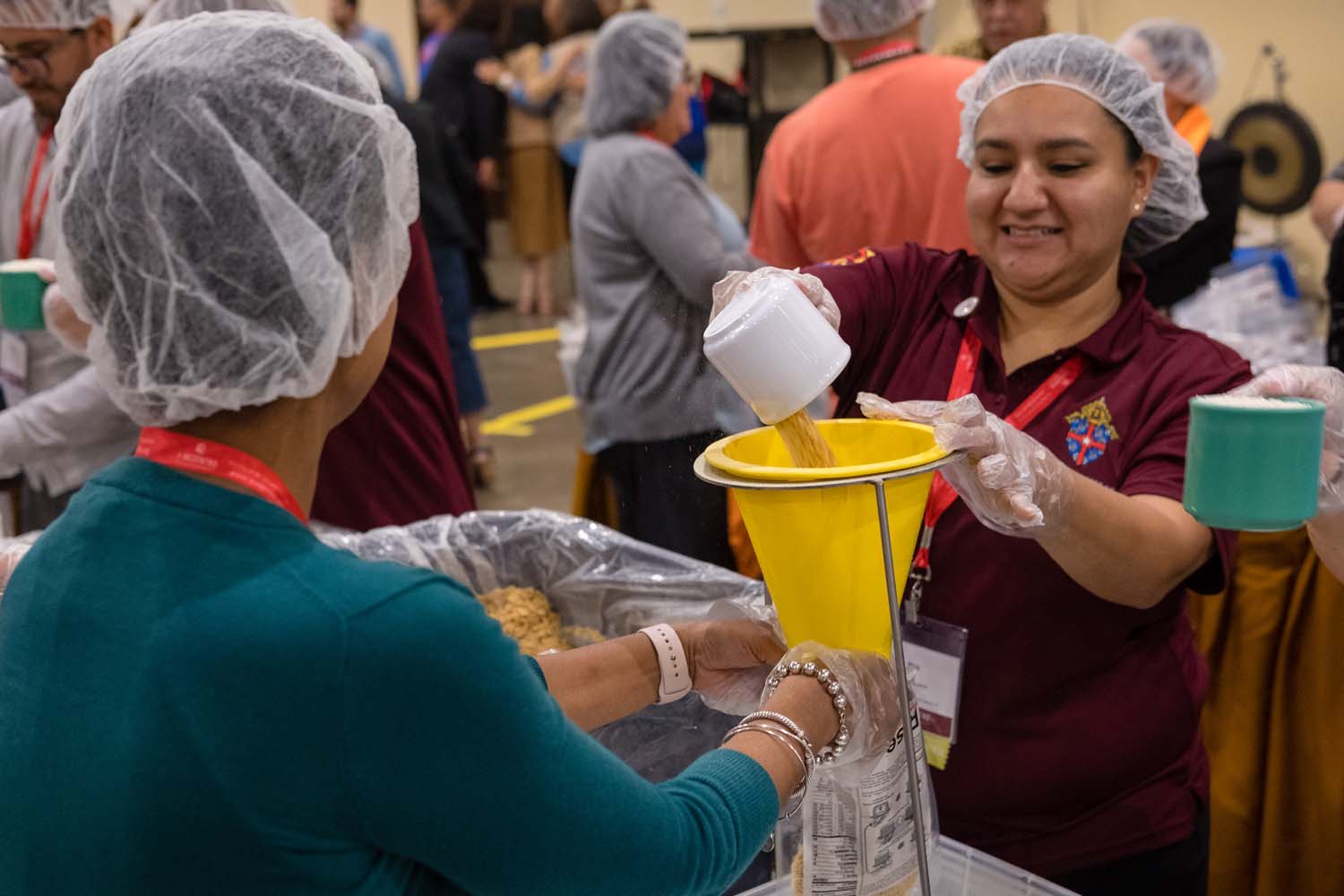 Mirna Ochoa, coordinator of Pastoral Juvenil Hispana and the office of Young Adult and Campus Ministry, pours rice into a bag during a service project at V Encuentro in 2018. Ochoa, with YACM’s Gabriela Karaszewski, were recognized by Catholic Relief Services. (File photo by James Ramos/Herald).

HOUSTON — Catholic Relief Services (CRS) chose six recipients of its 2019 Hispanic Heritage Partner Award in recognition of the dedication and commitment of members of the U.S. Hispanic ministry community.

CRS recognizes and values the partnership of these leaders in their dioceses, lay apostolic movements, and Hispanic associations.

Recognized from the Archdiocese were Gabriela Karaszewski, director of the Office of Young Adult and Campus Ministry, and Mirna Ochoa, coordinator of Pastoral Juvenil Hispana.

Other winners were Father Rafael Capó, director of the southeast U.S. Bishops’ Office for Hispanic Ministry for Regions V and XIV; Lia Salinas the director of Hispanic ministries for the Archdiocese of Baltimore; Bishop Gerald R Barnes of the Diocese of San Bernardino; and Carmen Ramos, CRS liason for Asociación Jóvenes Para Cristo or Young Adults for Christ.

In their positions at the Archdiocese, CRS said Karaszewski and Ochoa have collaborated with CRS to encourage young adults to act in solidarity on behalf of those less fortunate them around the world. By using CRS resources such as Rice Bowl/Plato de Arroz, the young adults have incorporated Lenten practices into their youth groups.

This fall, they will host a first-of-its-kind training in the Archdiocese that will be available to both of their ministries in English and Spanish.

“These leaders and their communities have helped create lasting change in Latin America and around the world,” said Bill O’Keefe, executive vice president for Mission and Mobilization. “Their work has spread justice, ministry and charity around our own borders. Their solidarity is an example for all in the Church.” 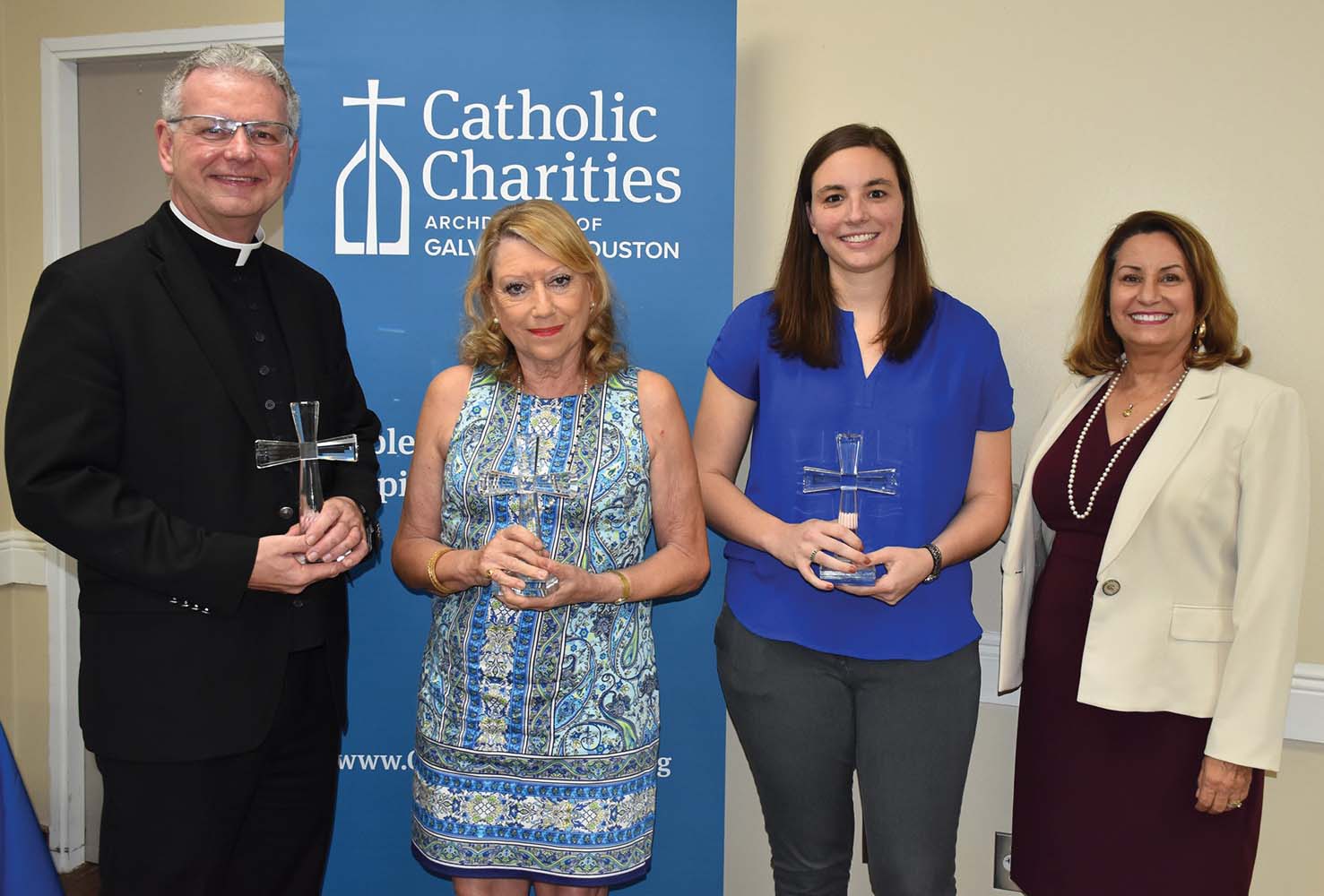 HOUSTON — Catholic Charities of the Archdiocese of Galveston-Houston presented its annual Charity in Action Awards to a parish, a corporation and a steadfast volunteer. The honors were announced at its annual meeting.

“Catholic Charities brings us together to channel our collective compassion into meaningful action,” Kevin K. Rech, board chairman, told attendees. “In the last year, we touched 97,000 lives, thanks to your willingness to be the hands and feet of Christ.”

The Charity in Action Award for a parish was presented to the Co-Cathedral of the Sacred Heart for generous volunteer and material support. Examples include donations of food for the Family Assistance Program and baby care items for Blessed Beginnings.

Sysco Corp. received the Charity in Action Award for a supporter for bringing teams of employees who contributed 300 hours of volunteer time bagging and distributing food during food fairs at the Guadalupe Center, in addition to making financial gifts.

The Charity in Action Award for a volunteer was given to Christiane Galvani for her commitment to the Refugee Resettlement Program. Christiane helps with individual tutoring as well as group ESL classes for refugees newly arrived to the U.S.