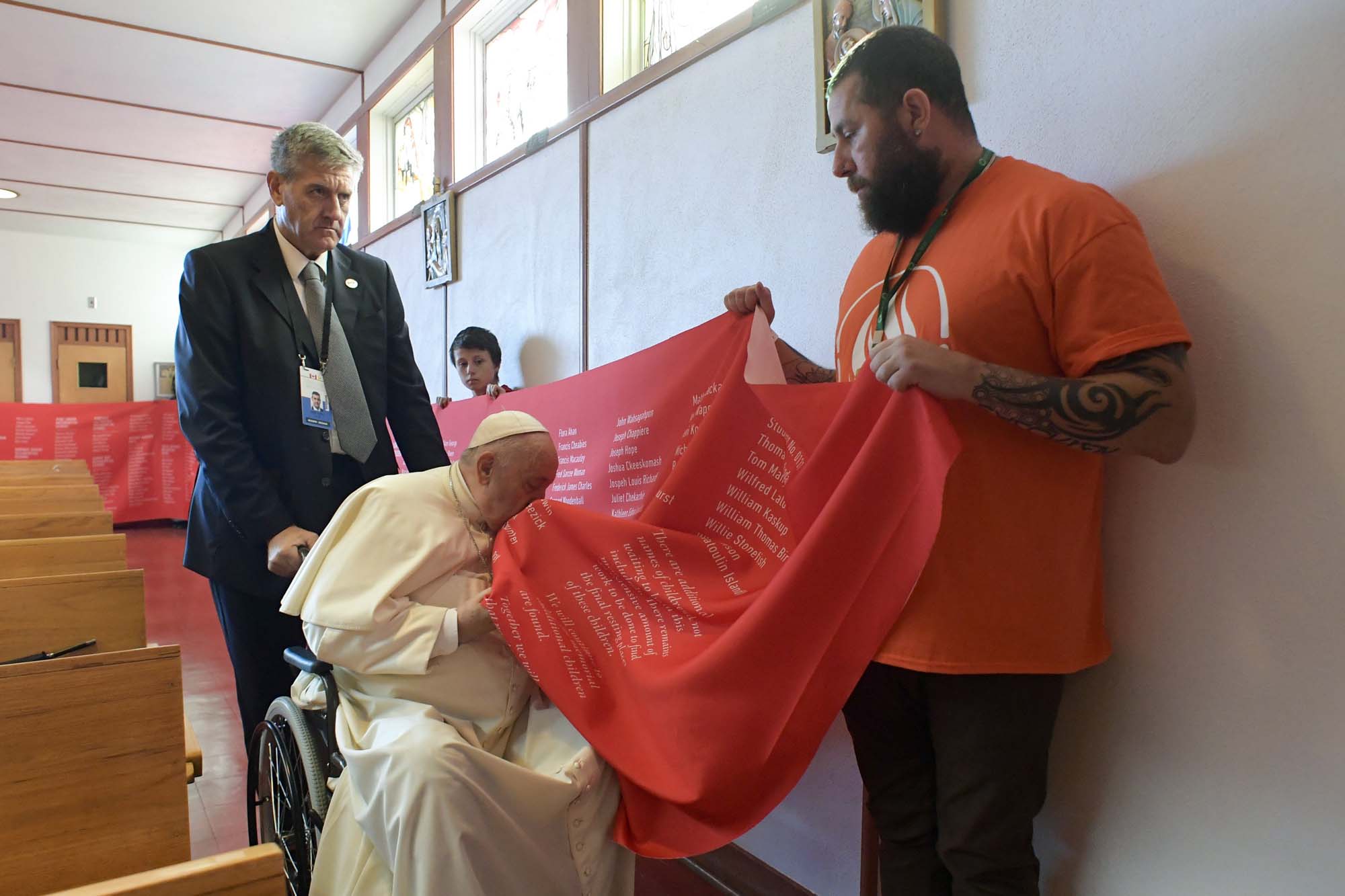 Littlechild, a 78-year-old lawyer, a survivor of abuse in a residential school and former grand chief of the Confederacy of Treaty Six First Nations, had spent decades advocating for the rights of First Nation, Métis and Inuit people and had lobbied hard for Pope Francis to come to Canada to apologize in person for the Catholic Church’s complicity in abusing children, breaking up families and suppressing Indigenous language and culture.

The chief had welcomed Pope Francis to his home — Maskwacis — on July 25, the first full day of the trip, and created some controversy by giving the pope his late grandfather’s headdress. He told Canada’s Native News Online that the Ermineskin Cree Nation had decided as a community that the headdress was an appropriate way to thank the pope for visiting their town and making his first apology on Canadian soil there.

“I am sorry,” the pope said at the Muskwa, or Bear Park, Powwow Grounds.

“I ask forgiveness, in particular, for the ways in which many members of the Church and of religious communities cooperated, not least through their indifference, in projects of cultural destruction and forced assimilation promoted by the governments of that time, which culminated in the system of residential schools,” the pope said.

The Canadian government has estimated that at least 150,000 First Nation, Inuit and Métis children were taken from their families and communities and forced to attend the schools between 1870 and 1997. At least 4,120 children died at the schools, and several thousand others vanished without a trace.

The survivors tell stories of enduring hunger, brutality and emotional, physical and sexual abuse at the schools, about 60% of which were run by Catholic religious orders and other Catholic institutions.

An almost constant drumbeat accompanied Pope Francis on his trip — to Edmonton, Maskwacis and Lac Ste. Anne in Alberta, to Quebec City and nearby Sainte-Anne-de-Beaupré and, finally, to Iqaluit in the Canadian Arctic.

The traditional drummers echoed heartbeats and heartache, a relentless reminder of how the trauma students experienced at the residential schools was passed down generation to generation in a lack of love and support and a lack of respect for individual dignity and community rights.

Archbishop Donald Bolen of Regina, Saskatchewan, a member of the Canadian bishops’ working group on Indigenous relations, was present at every stop Pope Francis made. And, at most events, including in Iqaluit, he traveled with residential school survivors from his province.

As the visit was ending July 29 on a graveled parking lot outside Nakasuk Elementary School, Archbishop Bolen told Catholic News Service he was moved by “the absolute determination, courage and resilience, on the one hand, of survivors embodied in a certain way by Chief Wilton Littlechild, and the courage and determination to be engaged in healing work by the pope — two old men who can barely stand up, who need help in all kinds of ways, but carry a common desire to bring healing and to take good steps forward.”

The apology was a crucial first step.

And it was something survivors wanted and needed to hear in person. Pope Francis knew that.

“The overall effects of the policies linked to the residential schools were catastrophic,” he said at Maskwacis. “What our Christian faith tells us is that this was a disastrous error, incompatible with the Gospel of Jesus Christ.”

‘All of us need healing’

At a prayer service on July 26 with Indigenous representatives in Lac-Ste-Anne, on the shores of a lake known for its healing power, Pope Francis said: “All of us, as a Church, now need healing: healing from the temptation of closing in on ourselves, of defending the institution rather than seeking the truth, of preferring worldly power to serving the Gospel.”

At a meeting in Quebec with government officials and Indigenous leaders on July 27, he said: “I express my deep shame and sorrow, and, together with the bishops of this country, I renew my request for forgiveness for the wrong done by so many Christians to the Indigenous peoples.”

At Mass July 28 at the National Shrine of Sainte-Anne-de-Beaupré, Pope Francis spoke of “the scandal of evil and the Body of Christ wounded in the flesh of our Indigenous brothers and sisters.”

Praying vespers with Canadian bishops that evening, he said: “Thinking about the process of healing and reconciliation with our Indigenous brothers and sisters, never again can the Christian community allow itself to be infected by the idea that one culture is superior to others, or that it is legitimate to employ ways of coercing others.”

Meeting Indigenous survivors of residential schools in Canada, Pope Francis entrusted them and the journey of truth, healing and reconciliation to three women: St. Anne, Mary and St. Kateri Tekakwitha.

“These women can help us to come together and start to weave anew a reconciliation that can uphold the rights of the most vulnerable in our midst and look at history without resentment or forgetfulness,” the pope said July 29, his last morning in Canada.

Before heading to the airport for a three-hour flight to Iqaluit, Nunavut, in the Canadian Arctic, Pope Francis met with two dozen survivors of residential schools from across Eastern Canada. Organizers said they included people from the Algonquin, Mohawk, Cree, Innu and Mi’kmaq nations.

Pope Francis told the group that he had come to Canada “as a friend” to meet representatives of the First Nation, Inuit and Métis communities and “to see, hear, learn and appreciate how the Indigenous populations of this country live.”

Pope Francis thanked the survivors “for having had the courage to tell your stories and to share your great suffering, which I could not have imagined.”

“This only renewed in me the indignation and shame that I have felt for months,” since delegations of First Nation, Métis and Inuit survivors visited the Vatican in March and April. Again, he said, in Iqaluit, “I want to tell you how very sorry I am and to ask for forgiveness for the evil perpetrated by not a few Catholics.”