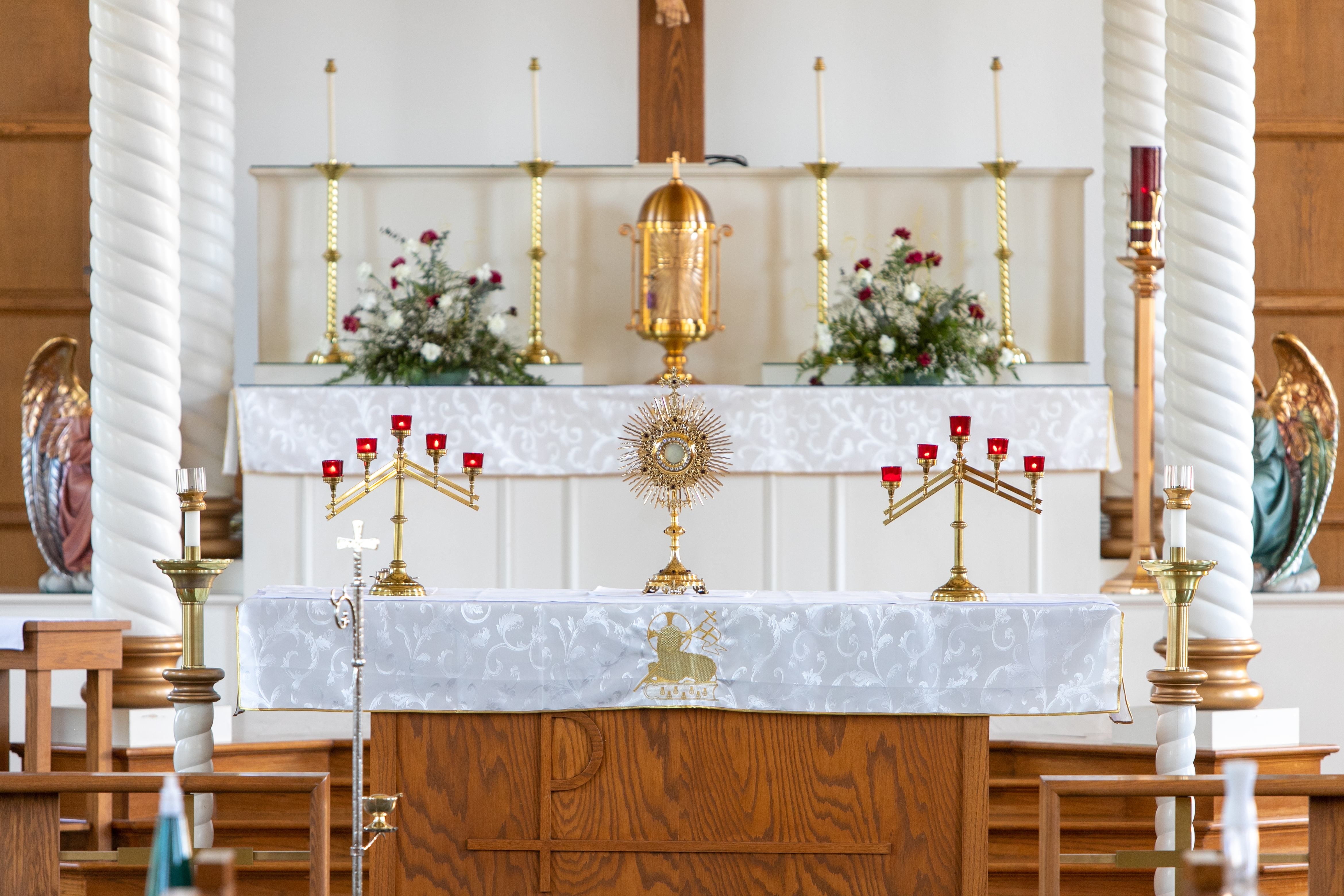 The Eucharist is seen inside a monstrance during Eucharistic Adoration at St. Mary, Star of the Sea Catholic Church in Freeport. Led by the U.S. bishops, a new three-year grassroots effort seeks to revive devotion and faith in the real presence of Jesus in the Eucharist. (Photo by James Ramos/Herald)

SUGAR LAND — From Conroe to Lake Jackson, Sugar Land to downtown Houston, thousands of faithful took to the streets in procession for the June 19 feast of Corpus Christi across the Archdiocese.

The prayerful, solemn gatherings marked a public witness to the Catholic faith. The feast day also coincided with the opening of a three-year grassroots revival of devotion and faith in the real presence of Jesus in the Eucharist, culminating in the first National Eucharistic Congress in the United States since 1975.

Initiated by the U.S. Conference of Catholic Bishops, the National Eucharistic Revival is an effort to reverse the waning belief among professed Catholics in the Real Presence in the Holy Eucharist.

According to a 2019 Pew Research Center study, roughly two-thirds of U.S. Catholics do not believe that the bread and wine at Mass become Christ’s body and blood during the consecration — a core dogma of the Catholic faith and the “source and summit” of the church’s life, according to the catechism.

In Sugar Land, Father David Angelino, pastor of St. Theresa Catholic Church, carried a monstrance with the Blessed Sacrament in procession on June 16 ahead of the feast of Corpus Christi. Following Mass, the procession coursed through the parish grounds, one that traveled over rose petals shaped in hearts and other sacred imagery, joined by pious parishioners.

White ribbons fluttered from the processional cross, and as the sun set in the west, candles and flashlights illuminated the evening. The night culminated with an outdoor Benediction and procession back into the sanctuary.

In Conroe, Father Philip Wilhite led his congregation at Sacred Heart Catholic Church through downtown Conroe for a one-mile Eucharistic procession, a 45-minute walk through the heart of the Montgomery County city.

Parishioners sported umbrellas to hide from the intense June summer heat, like Father Wilhite under an ornate canopy carried by altar servers.

Deeper into the Eucharist

Following these eucharistic processions, U.S. dioceses will develop parish teams of revival leaders to help their fellow Catholics reflect deeper on the centrality of the Eucharist in the life of the church.

Locally in the Archdiocese, parishes are encouraged to bring parishioners closer to Christ through prayer, Sacraments and other events.

There also will be a collaboration with religious education directors and the Catholic schools to plan a curriculum that focuses more on the teaching of the Real Presence.

The U.S. bishops approved plans for the revival and the congress last November during their fall general assembly in Baltimore.

‘Proclaim it from the Rooftops’

Both are being led by the USCCB’s Committee on Evangelization and Catechesis, chaired by Bishop Andrew H. Cozzens of Crookston, Minnesota.

“We are really aware in these times that we live that the Church needs to become more missionary. The culture itself doesn’t support what we do anymore as Catholics,” Bishop Cozzens said in a statement. “All Catholics are invited into a renewed encounter with Jesus Christ in the Eucharist, especially those Catholics who don’t fully understand the power of the Eucharist.”

As people are seeking deeper connection more than ever before, “this is a time not to be ashamed of the Gospel but to proclaim it from the rooftops,” he added.
Los Angeles Archbishop José H. Gomez, USCCB president, called the Eucharist “the gateway key to the civilization of love that we long to create.”

“Jesus promised that he would be truly present in the Sacrament of the altar — but also in the flesh and blood of our neighbors, especially those who are poor and suffering,” he said. “If we ever hope to end human indifference and social injustice, then we need to revive this sacramental awareness.

“In every human person we meet — from the infant in the womb to our elderly parents drawing their dying breaths — we must see the image of the living God.”

Pope: Adoration is the Secret to Knowing the love of Jesus

Much of Pope Francis’s catechesis has also emphasized the importance of the Eucharist.

Immersing oneself in silent Eucharistic adoration is the secret to knowing the Lord, Pope Francis said in 2016.

“One cannot know the Lord without being in the habit of adoring, of adoring in silence,” the pope said in his homily. Yet, he lamented, “I believe, if I am not mistaken, that this prayer of adoration is the least known among us; it is the one we engage in the least.”

He reflected on the experience of Paul, who fell to his knees before the Father, as seen in Ephesians 3.

For more information about the Eucharistic revival, visit www.eucharisticrevival.org.