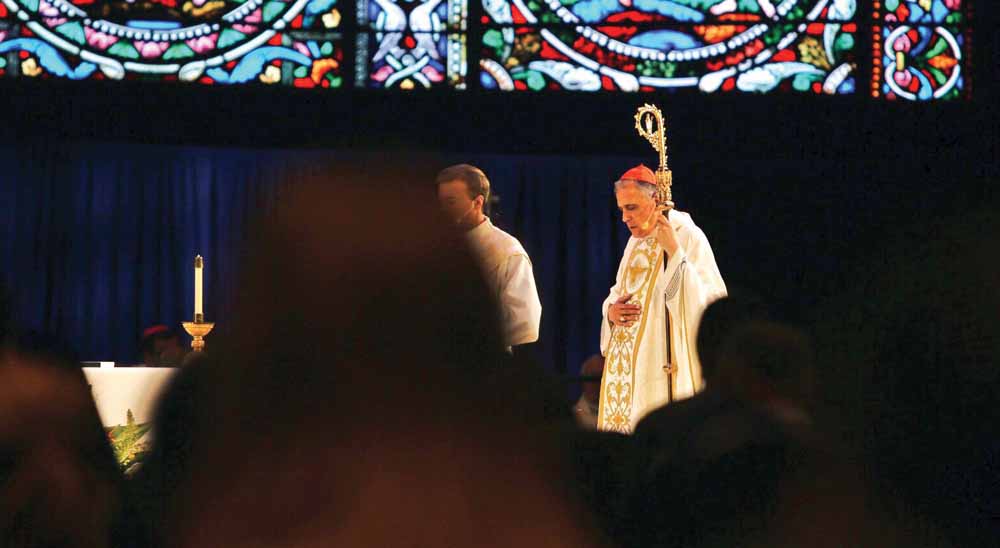 Daniel Cardinal DiNardo joined Archbishop Christophe Pierre, the papal nuncio to the United States, in concelebrating the final Mass of sending forth with leaders from dioceses and Catholic organizations gathered for the July 1 to 4 “Convocation of Catholic Leaders: The Joy of the Gospel in America July 4 in Orlando, Fla. Photo by James Ramos/Herald.

HOUSTON (CNS) — Many of the Catholic leaders attending the July 1 to 4 gathering in Orlando, Florida, have been to enough retreats or conferences over the years to know that the real challenge comes when they try to put what they heard into practice.

Inspired and a little overwhelmed could describe the follow-up reaction of a number of the 3,500 delegates from the “Convocation of Catholic Leaders: The Joy of the Gospel in America.”

And many, including more than 25 delegates from around the Archdiocese of Galveston-Houston, who headed home July 4, agreed they had a renewed energy to set a new course for the U.S. Catholic Church.

The convocation, years in planning, was the first time in a century that the bishops convened Church leaders — clergy, religious, seminarians, parish volunteers and professional staff among them — to respond to social and spiritual quandaries that have left millions of people drifting on the margins of society.

For more information, and to watch videos from the Convocation on demand, visit the USCCB.

Clergy — more than 155 prelates and 300 priests — recognize that the Church must respond to those quandaries. While cardinals, archbishops and bishops played leading roles throughout the convocation, they also were on hand to listen.

They joined breakout sessions; some did not speak at all. During the final gatherings of diocesan delegations and affiliated groups July 4, bishops could be seen quietly watching and taking notes as the conversations on practical steps to undertake back home unfolded.

Pope Francis fueled the impetus for the gathering. His 2013 apostolic exhortation, “Evangelii Gaudium” (“The Joy of the Gospel”), gave planners at the U.S. Conference of Catholic Bishops’ another reason for organizing the gathering.

The pope’s document lays out a vision of the Church dedicated to evangelization — missionary discipleship — in a positive way, with a focus on society’s poorest and most vulnerable, including the aged, unborn and forgotten.

His call for a more merciful Church joyfully working on the peripheries of society to heal the wounded inspired the delegates throughout the convocation.

Seeing the pope’s call embraced by the delegates was exciting for Cynthia Colbert, president and CEO of Catholic Charities of the Archdiocese of Galveston-Houston and part of the Houston delegation.

“I believe that as Catholic Charities, we are called to love and serve the poor and be Christ’s hands, feet, and touch to them,” she said. “Pope Francis speaks to this in the Joy of the Gospel.”

Catholic Charities serves a diverse array of people through several different programs, but “there are many people we don’t reach yet,” she said.

According to Colbert, the agency is seeking to increase collaborations with parishes and other Catholic ministries “so that we are unified in our mission to share the joy of the Gospel through works of charity and justice.”

Father Thu Ngoc Nguyen, pastor of Christ the Incarnate Word Catholic Church in Houston and vicar for Vietnamese Catholics, said he was inspired by the devotion of the faithful at the Convocation.

“The distinct moment was when we had the procession of the Holy Eucharist. Even though it was early and the weather was hot, thousands of people had come to reverently worship the Blessed Sacrament. It was so beautiful,” he said. The Holy Spirit revealed in many participants the fruits of “joy, kindness and peace.”

Today, Father Nguyen said he continues to remind himself and others to be open to the guidance of the Holy Spirit to continuously bring joy, kindness and peace to all people under the protection and love of the Blessed Virgin Mary.

Father Miguel Solorzano, pastor of St. Charles Borromeo Catholic Church in Houston, said “it was a unique experience to gather Catholic laypeople and clergy from all over the U.S. to discuss issues related to our ministry” and looks forward to encouraging the faithful, especially those at St. Charles Borromeo, to be “engaged in our call to ‘Go and make disciples of all nations.’”

For many delegates, seeing the Church’s diversity — Latinos, African-Americans and Africans, Native Americans and Asians from across the continent — was an inspiring sight, helping them better understand the idea of the Church as family.

Deacon Leonard Lockett, vicar for Catholics of African Descent, said, “The experience of being there was ... a lifetime opportunity. I saw Roman Catholics from across our nation, all different languages, races, ages and vocations coming together to share our bond in the Baptism of Jesus Christ.”

Deacon Lockett, whose focus was on poverty, racism and exclusion, said he was challenged to see that the Church in the U.S. is splintered.

“Our beloved Church is suffering the same symptoms as the majority of our nation’s population: that race, poverty and welcoming the forgotten is a minority issue and is of little or no concern of me,” issues of which Jesus Christ himself experienced, according to Deacon Lockett.

Deacon Arturo Monterrubio, director of the Office of Family Life Ministry, said, “it is amazing to live in the most multicultural city in the United States, so we have a very interesting challenge to reach people in different cultures and languages.”

With the hundreds of cultures in Houston comes the gamut of those lived experiences, and the crucial need to serve these diverse lives, those in the peripheries of the Church.

Deacon Monterrubio said the Office of Family Life Ministry is working to address these needs with a different perspective, including those with same-sex attraction, co-habiting without the Sacrament of Marriage, the divorced or separated who may not feel welcome, and many more.

“All of these persons are, and have been a long time, in the peripheries. Having just this new ‘perspective’ to reach them must change our vision and look for different ways to minister to them,” he said. “I know this is more than just attitude and perspective, this is more action than ideas, so we have too much to do with joy reflected in our actions.”

Though the work may be mighty, Deacon Monterrubio welcomes the prayerfully challenge: “The eyes of a lot of people are on us in Galveston-Houston (waiting to) see how we respond to the challenge to bring (others) the ‘Joy of the Gospel.’”