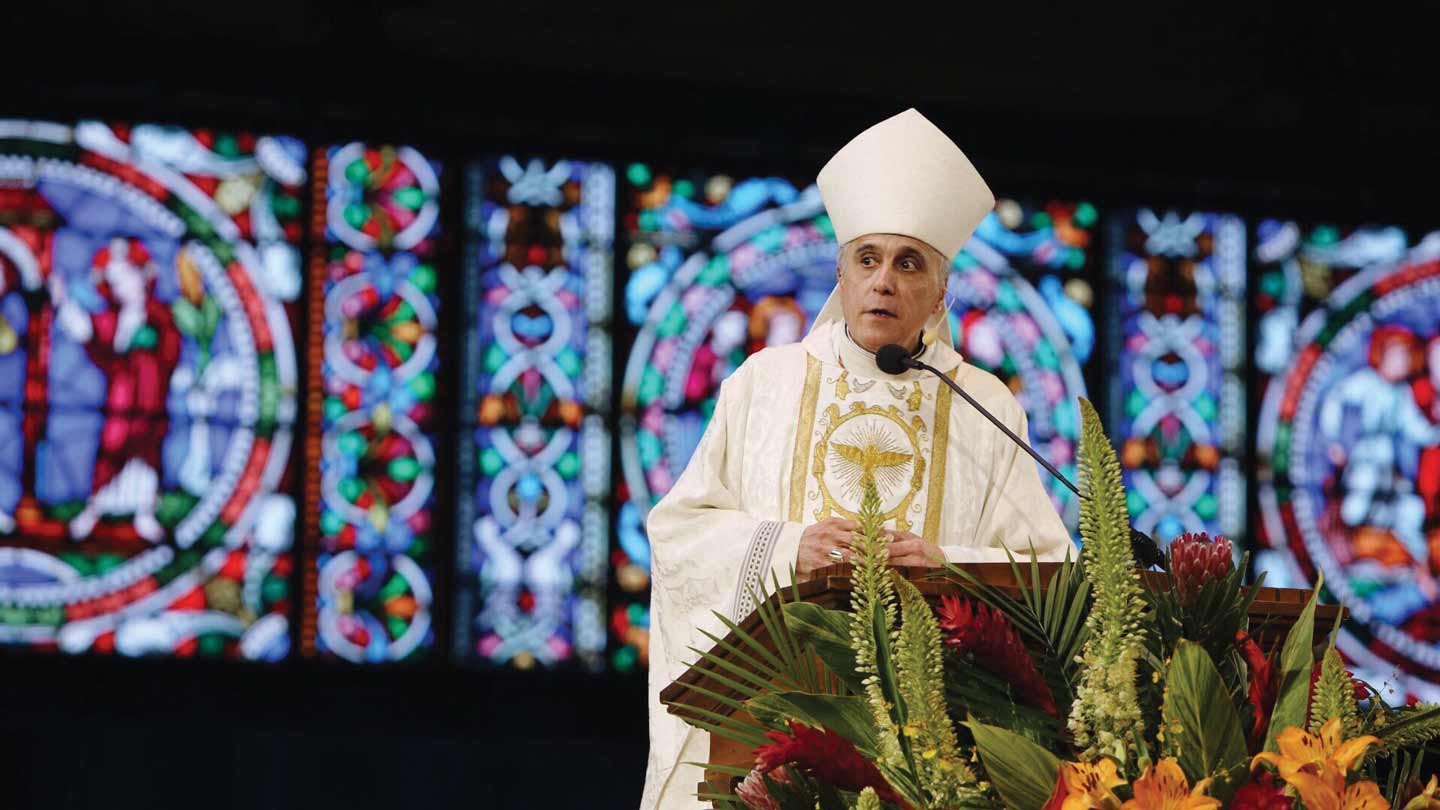 Daniel Cardinal DiNardo delivers his homily during the Mass of Mission and Sending Forth with more than 3,500 gather during the “Convocation of Catholic Leaders: The Joy of the Gospel in America” on July 4 in Orlando, Fla. Leaders from dioceses and various Catholic organizations gathered for the July 1-4 convocation. Photo by James Ramos/Herald.

ORLANDO, Florida (CNS) — Unprecedented and powerful, the “Convocation of Catholic Leaders: The Joy of the Gospel in America,” was a gathering of four days of speeches, panels, Masses, prayer services and much conversation.

Sponsored by the U.S. Conference of Catholic Bishops (USCCB), the convocation brought together more than 3,500 lay and religious leaders from 160 dioceses and 185 national organizations. They gathered to explore the current challenges and strengths of the Church and its evangelization efforts.

Among the dozens of highlights was the opening speech by Hosffman Ospino and the closing homily by Daniel Cardinal DiNardo, USCCB president.

Auxiliary Bishop George A. Sheltz, with several other Texas bishops including Joe Vásquez and Daniel Garcia of Austin; Edward Burns of Dallas; Gustavo García-Siller of San Antonio; Brendan Cahill of Victoria; Michael Sis of San Angelo; Daniel Flores of Brownsville; Mark Seitz of El Paso; Robert Coerver of Lubbock; and Curtis Guillory of Beaumont, was a part of the large contingent of at least 150 bishops and joined 500 priests and deacons in celebrating daily Masses.

Some 25 representatives from the Archdiocese of various ministries and departments joined a number of other parishioners and laity from the Greater Houston area, helping make Texas the second largest state delegation, only behind California.

The event, which marked a first in U.S. Church history, was a national response to Pope Francis’ 2013 apostolic exhortation, “Evangelii Gaudium” (“The Joy of the Gospel”), according to organizers.

The diversity of the Church, in both age, generation, ethnicity and ministry, was on full display in every gathering during the week.

Susie Lopez, president of the Young Catholic Professionals - Houston chapter, said she immediately could identify so many elements that allowed herself and others to feel like they were in a “holy space,” even inside a large conference hall.

The accessibility and approachability of the bishops and other Catholic leaders was “apparent from the beginning,” she said. “To sit side-by-side and discuss the challenges with them was unlike any other gathering.”

Like many others, Lopez said the convocation was challenging.

“It was difficult having to listen to my fellow brothers and sisters in Christ speak to their struggles, challenges and sometimes daunting tasks set before them in their pastoral or ministerial work,” she said. “There are many people who need the Church’s guidance and support and we all must work together and carry the cross together, as we strive to minister to those we serve.”

The convocation brought together people not just from pro-life and social justice areas of the Church, but also people involved in education, evangelization, media and communications, Liturgy, and youth and young adult ministries. In addition, there were those serving Hispanics, Asians, African-Americans and other communities.

While there was a great sense of unity, the delegates were challenged to hear the voices of the poor and the marginalized: Ospino on the growth of Latino Catholicism, strong words from Ansel Augustine on the role of African-American Catholics, and much applauded remarks by Helen Alvare and Kerry Weber on the role of women and the Church.

The speeches and liturgies were accompanied by dozens of breakout sessions that unpacked the topics featuring more than 239 panelists, each with bishop facilitators. The emphasis was more on dialogue than lectures. What was most evident, however, were the constant conversations taking place throughout the hotels and gathering spaces.

On July 1, the evening was dedicated to Marian devotions of numerous cultures in the Church, looking to the Blessed Virgin Mary as the Mother of Evangelization.July 2 featured an evening of adoration and reflection, dedicated to encountering Jesus as the Healer of Wounds and Source of Mercy.

And July 3, the final full day at the convocation, featured a night of witness and praise with Catholic worship leaders Matt Maher and Audrey Assad, each reflecting on their experience as leaders in the Church.

Nicole Driscoll, campus minister at Rice University, attended the convocation with the Archdiocese and a national young adult delegation.

She said she loved seeing all the bishops concelebrate Mass together.

Driscoll was challenged during the week by being with people who weren’t able to share their stories and lived experiences with leaders in the breakout sessions, mainly because of time constraints.

“It was a good beginning of listening to those on the peripheries, and we must continue to do so in our local communities,” she said.

In addition to lay delegates, attendees included 155 cardinals, archbishops and bishops, along with 380 priests, 175 women religious, 125 deacons and 10 religious brothers.

Following the final plenary on July 4, delegates met with their respective bishops for goal-setting as a result of the convocation.

Throughout the available areas of nearby hotels and the massive Orange County Convention Center, bishops and their respective delegations gathered to discuss and share what they learned during the convocation. Cardinal DiNardo sat with Bishop Sheltz and others of the delegation, many leaning forward, fully attentive to what was being discussed; a scene replayed all throughout the meeting spaces.

Jesus took a few loaves and fishes and turned them into a feast for thousands, offering the Church an example of faith in action, Cardinal DiNardo said in his homily during the convocation’s closing Mass July 4 to send the 3,500 delegates home.

In the face of adversity and naysayers in today’s world — not unlike the apostles who wondered how they would feed the masses — the Church is called to take what they have, as Jesus did and reap the rewards of achieving great things in the face of the impossible, he said.

“When we see the complexity, when we see the impossible... Jesus will say, ‘Just give me what you have.’ Imagine what we will have left over after we do it at the Lord’s word,” he said. “Jesus gives the apostles and everybody who listens to them... He gives them that power. Do we believe? St. Paul says if we believe we can go out and do what is asked.”
A tour de force was the final address by Archbishop Christophe Pierre, the papal nuncio to the United States, according to Greg Erlandson with Catholic New Service. Archbishop Pierre called the gathering “a new Catholic moment, a privileged time to be renewed for the mission of evangelization in this country.”

Weaving together references to nearly every plenary talk, the archbishop showed that he had not just attended every session, but had listened as well.

The nuncio called the convocation a “journeying together” that strengthened “our common bonds.”

“This convocation has reawakened our collective conscience to the plight of the poor, the persecuted, and those at the peripheries,” he concluded.

For more information about The Convocation Of Catholic Leaders: The Joy Of The Gospel In America, including video on demand of different sessions and more, visit www.usccb.org/convocation. †