Competition, community and faith all in stride at Steps for Students 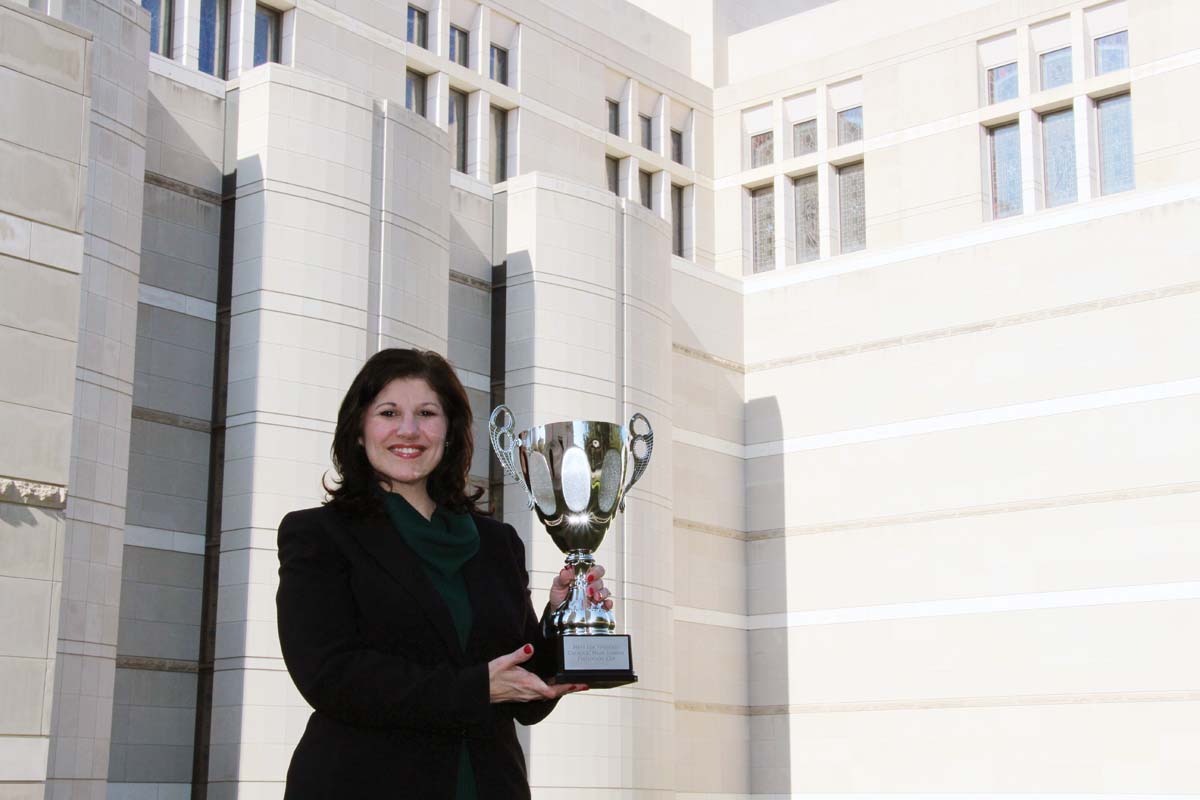 Catholic Schools Superintendent Debra Haney holds the new President’s Cup, created to encourage more high school participation at Steps for Students on Feb. 16, one of the largest 5K school races in the country. The cup winner will be the high school with the largest percentage of race participation based on enrollment. Photo by James Ramos/Herald.

HOUSTON — Runners have a few days left to register for the 14th Annual Steps for Students 5K Run/Walk at the lower price before rates increase another $10 on Feb. 1 as exciting elements are added.

To encourage more high school participation at one of the nation’s largest 5K school races, a foot-and-a-half tall silver-hued metal trophy — the President’s Cup — has been created. The winner will be the high school with the largest percentage of participation in Steps for Students based on enrollment, said Julie Eberle, Archdiocesan associate director of development.

“Our students love a good competition,” said Father Jeff Johnson, S.J., president of Strake Jesuit College Preparatory. “Steps for Students has become a fun, spirited event each year for our community. Our students have a competition amongst themselves to sign up to participate. I expect a big turnout.”

But St. Agnes Academy and Incarnate Word Academy (IWA) are also drumming up runners to compete for the cup.

Mary Aamodt, principal at IWA, said the school’s Athletic Director Rick Perez rallied students and parents to join the Steps for Students race. He said in an email “IWA is in it to win it!”

St. Laurence Catholic School in Sugar Land is organizing one of the largest school teams this year as it did last year, so far having more than 370 registrants.

Our Lady of Guadalupe (OLG) Catholic School celebrates one of the largest Catholic Village tailgate parties, complete with free pancakes for participants. OLG, an Inner City Catholic School, is tops for a single school in number of donors and has raised almost $13,000 for Steps so far.

On race day morning, after a blessing from Daniel Cardinal DiNardo, a blast from the start gun and release of confetti will officially send the crowd on their way at 8 a.m. Saturday, Feb. 16. The course starts at the Co-Cathedral of the Sacred Heart in a run certified and sanctioned by the U.S. Track and Field, in which members of the public can register.

Steps for Students raises funds for schools and tuition assistance for families in need, raising $1 million each of the past five years.

That financial support makes private education affordable to all residents and is at the heart of Steps for Students. With more than 18,000 students enrolled, the Archdiocese has the largest private school system in Texas.

Students from St. Francis of Assisi Catholic School recently returned to their renovated school after Hurricane Harvey flooding and will be among thousands of Catholic school students, families and supporters as part of Steps for Students.

The school had a long journey before returning to its inner-city campus in Kashmere Gardens. While renovations were being completed, they shared a campus with Resurrection Catholic School in Denver Harbor.

Now back to its own facilities, St. Francis is trying to recover enrollment, down from nearly 100-strong to 37 students. Principal Tawana Fulmer said she also has four core teachers, pre-K teacher Sister Marian Emmanuel, a music teacher and a combo physical education coach and librarian.
“I think it’s great that Steps for Students benefits all the Catholic schools, especially in tuition assistance for all those students who qualify,” she said.

Retired banker and now president of the Scanlan Foundation, Larry W. Massey Jr., is serving on the Steps for Students committee. He offered his help to St. Francis, sponsoring t-shirts, Holy Bears stuffed animals and refreshments at the school’s tent in the Catholic School Village, a tailgating event at the 5K.

“My daughter was a medical resident at LBJ Hospital near St. Francis and I remember she was stranded five days straight helping at the hospital as Harvey flooded the city, including St. Francis church and school,” Massey said. “I had visited the St. Francis school as part of The Cardinal’s Circle before the hurricane so I thought it was a great school. Now they need some love.”

Debra Haney, superintendent of Catholic Schools for the Archdiocese, said, “It is a unique opportunity to see all of our schools in one place, at one time, with [our bishops], priests, deacons, administrators, Archdiocesan leadership, teachers and groups that contract with our schools... all for a common purpose — to support our Catholic schools.”

“One of my favorite Steps memories is when the drone flew overhead at the starting line and more than 10,000 people were waving, cheering and excited to be at the event raising money for our Catholic schools,” Haney said.

Steps for Students benefits the network of 59 Catholic schools in the Archdiocese of Galveston-Houston, bringing together school communities, parishioners, community partners and runners from across 10 counties.

Steps for Students, a USA Track and Field certified and sanctioned event, is chip-timed and features a single-loop. The pre-registration fee is $20 per runner until Feb. 1, then increasing to $30.

For more information, registration and to donate, visit www.steps4students.org. †