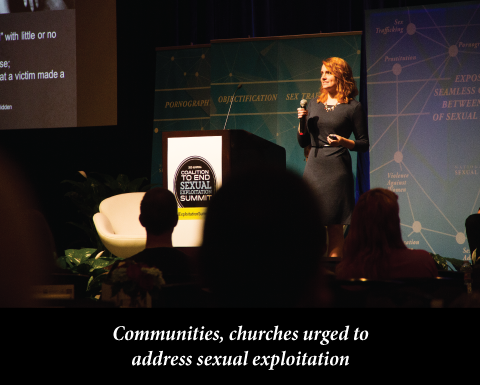 Haley Halverson, director of communications at the National Center on Exploitation, speaks on the link between pornography and sexual violence at the 2016 Sexual Exploitation Summit in Houston Sept. 30. Halverson joined a panel that discussed the public health impacts of pornography with Noah Church, Gabe Deem and Gary Wilson. Photo by James Ramos/Herald.

HOUSTON — Communities must do more to address the effects of pornography by first acknowledging there is a problem, according to a presenter at the recent summit hosted by the National Center on Sexual Exploitation. Additional resources and education are also needed to help those affected by pornography, including those in Catholic church communities.

To address the problem, McDowell said churches must develop a workable plan to provide education and support. He said the plan should encompass adequate training for leaders and staff of churches and church schools, a meaningful curriculum, information on Websites, books and materials, broader marriage training programs and information about counseling services. McDowell also urged churches to spend more of their resources on youth programs.

Deacon Arturo Monterrubio, director of the Archdiocese of Galveston Houston’s Family Life Ministry, hopes to help change that state of affairs.
He is looking into ways for parishes deal with pornography and its side effects, such as domestic abuse.

“We are called to shed light on these situations,” he said. “Just to be aware is not good enough. We need to be prepared to help and provide information for help, to provide legal support and medical support.”
In Brief
More than 400 people from some 200 groups from across the U.S. and seven countries attended the National Center on Sexual Exploitation’s third annual summit, held in Houston Sept. 29 to Oct. 1.

Launched as an interfaith effort to counter pornography in New York City five decades ago, the nonprofit, formerly known as Morality in Media, works to change sexually exploitative policies, to educate and empower the public and to lead the larger movement for freedom from sexual exploitation, objectification and violence.