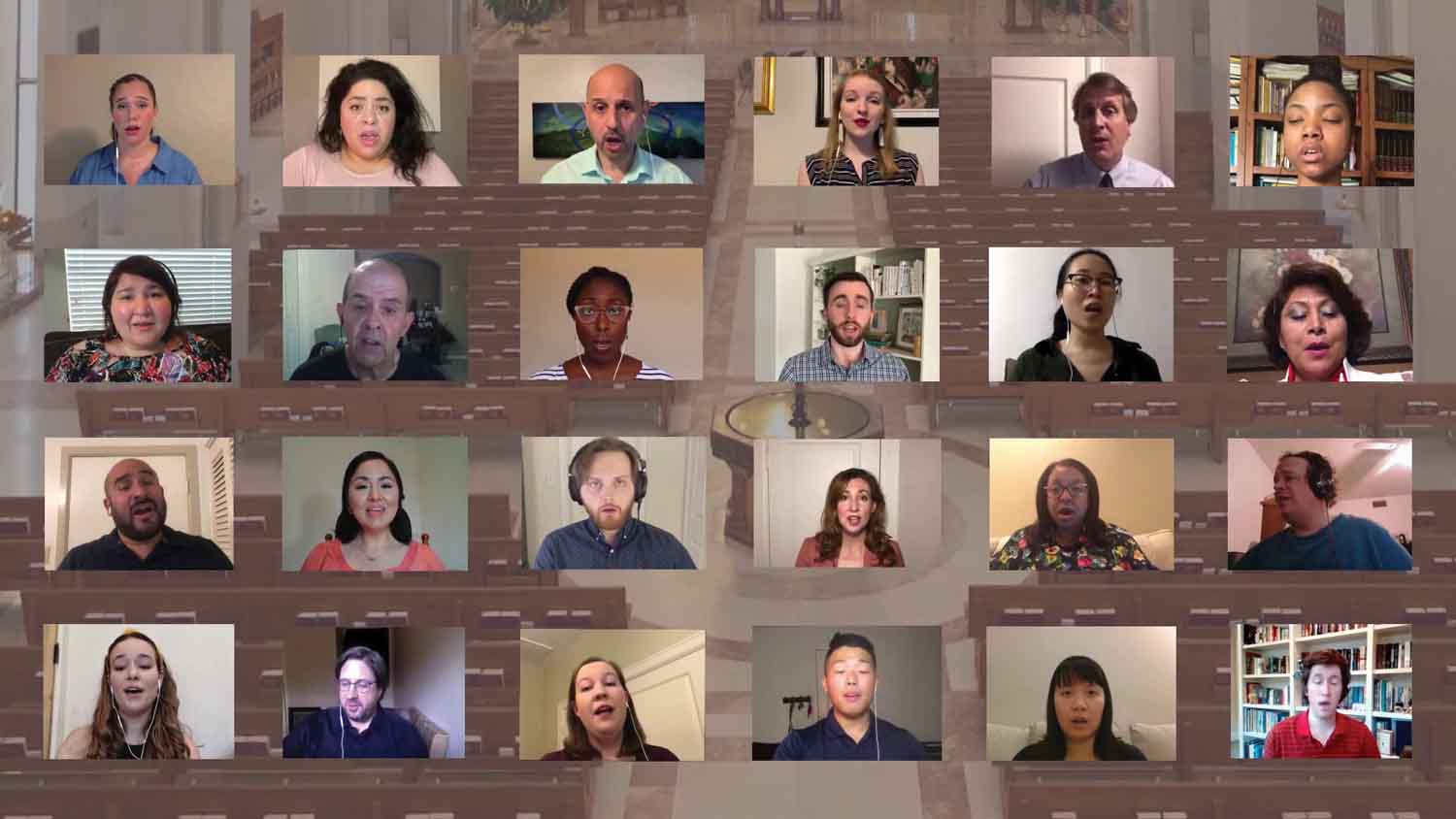 Co-Cathedral of the Sacred Heart choir members sing during a virtual choir performance of “Ubi Caritas” that was dedicated in honor of Archbishop Emeritus Joseph A. Fiorenza and retired Auxiliary Bishop Vincent M. Rizzotto, as well as two other priests, who contracted COVID-19 in July. (Screen grab courtesy of Co-Cathedral Choir)

HOUSTON — Usually, when Dr. Crista Miller conducts the choir and music ministry, she directs at the Co-Cathedral of the Sacred Heart. She’s able to make easy adjustments to the voices she hears. Louder. Softer. Pianissimo.

But when the pandemic splintered the beloved choirs that usually sing from the sky-high choir loft in the airy Co-Cathedral, everything changed.

Suddenly it was dangerous to sing in public, especially near others. Face masks changed the way a voice is projected while singing and how a voice is heard.

Even with the changes, choir members still craved the community that gathered nearly weekly for rehearsal. The intimate experience of singing in unison became disconnected by social and physical distancing.

But when a desire grew to give Father Lawrence Jozwiak, who had received a new assignment as pastor of St. Maximilian Kolbe parish in west Houston in mid-June, a send-off from the choir that he so lauded, the music ministry leaders mobilized.

Miller, who is also the cathedral’s organist, teamed up with Patrick Schneider, assistant director of the Co-Cathedral’s Cor Jesu Choir, to coordinate the virtual effort.

Since the Co-Cathedral’s music ministry remains faithful to any Church mandates or documents on Liturgies as a cathedral, no pre-recorded music is ever permitted during any rites or celebrations, so any effort done to honor Father Lawrence had to be live.

Then in July, when Archbishop Emeritus Joseph A. Fiorenza and retired Auxiliary Bishop Vincent M. Rizzotto, as well as two other priests, contracted COVID-19, there was another concerted effort to organize a virtual choir performance to honor them.

Miller said both Archbishop Fiorenza and Bishop Rizzotto were deeply involved with the building of the Co-Cathedral, especially the music department, so the dedication was only appropriate.

The process for both videos was similar but unlike any other choir arrangement usually done for a choir.

“This isn’t really like real choir at all,” Schneider said. “We get together for choir for real, and everyone rehearses together. And then we make the music.”

For the virtual choir, Miller and Schneider worked together for several hours to prepare with accompaniment and conducting tracks. The songs chosen — “Draw Us In the Spirit’s Tether” by Harold Friedell for Father Lawrence and “Ubi Caritas,” which is the Offertory Proper (Gregorian Chant) for Holy Thursday — were already well known by the choir. “Ubi Caritas” was also sung by the choir when Archbishop Fiorenza received his pallium from Pope Benedict XVI in Rome.

Even though the entire process was innovative, this wasn’t the time for anything new.

Each singer in the choir recorded their own individual audio and video using whatever equipment they had using conducting and accompaniment tracks helped keep them in time. Then, Schneider would piece these separate pieces — 20 voices in the first, 24 in the second — and produce a single unified sound.

Also featured were a number of Co-Cathedral choir alumni voices, including a singer in Hong Kong and another Minnesota.

Schneider said the song choice, especially for the video dedicated to the two bishops, was especially meaningful.

“Draw Us In the Spirit’s Tether” is “a communion anthem,” he said. Sung on Corpus Christi weekend, “It definitely speaks of the body and the blood and all that. I feel like it’s such a profound and vivid description of the act of communion. For a long time, so many members of our church community, and so many others, have not been able to partake in the act of communion.”

In addition to the virtual choirs, a new effort from the music ministry was an online summer choir camp for children.

At the camp, young attendees had the chance to team up with professional mentors and learn how to sing lauds, or Morning Prayer, in a choral setting.

Schneider said the children had the chance to tackle stage fright immediately since they had to sing solo in front of others by themselves on a webcam, rather than in person near their peers. He added he was inspired with how supportive the children were of each other even in those spotlight moments.

A particularly poignant moment for Miller was the fact that an attendee was in Beirut, Lebanon, during the port explosion.

She and her family were safe, and she still attended that day’s programming, but Miller said she was inspired by the young girl’s choice to still pray with the Houston community even though her home had been ravaged by the explosion just almost an hour before the camp would begin.

Even with the pandemic, Miller said the Co-Cathedral’s music ministry remained committed to serving the Church in every way possible, including livestreamed music and celebrations.

“We’re doing whatever it takes right now in order to help people encounter God, and also give comfort to them, too,” she said. “We’ve missed our choir, and they miss coming, too. It’s just ministering to everyone this way.”