Closer to the beginning of a new journey 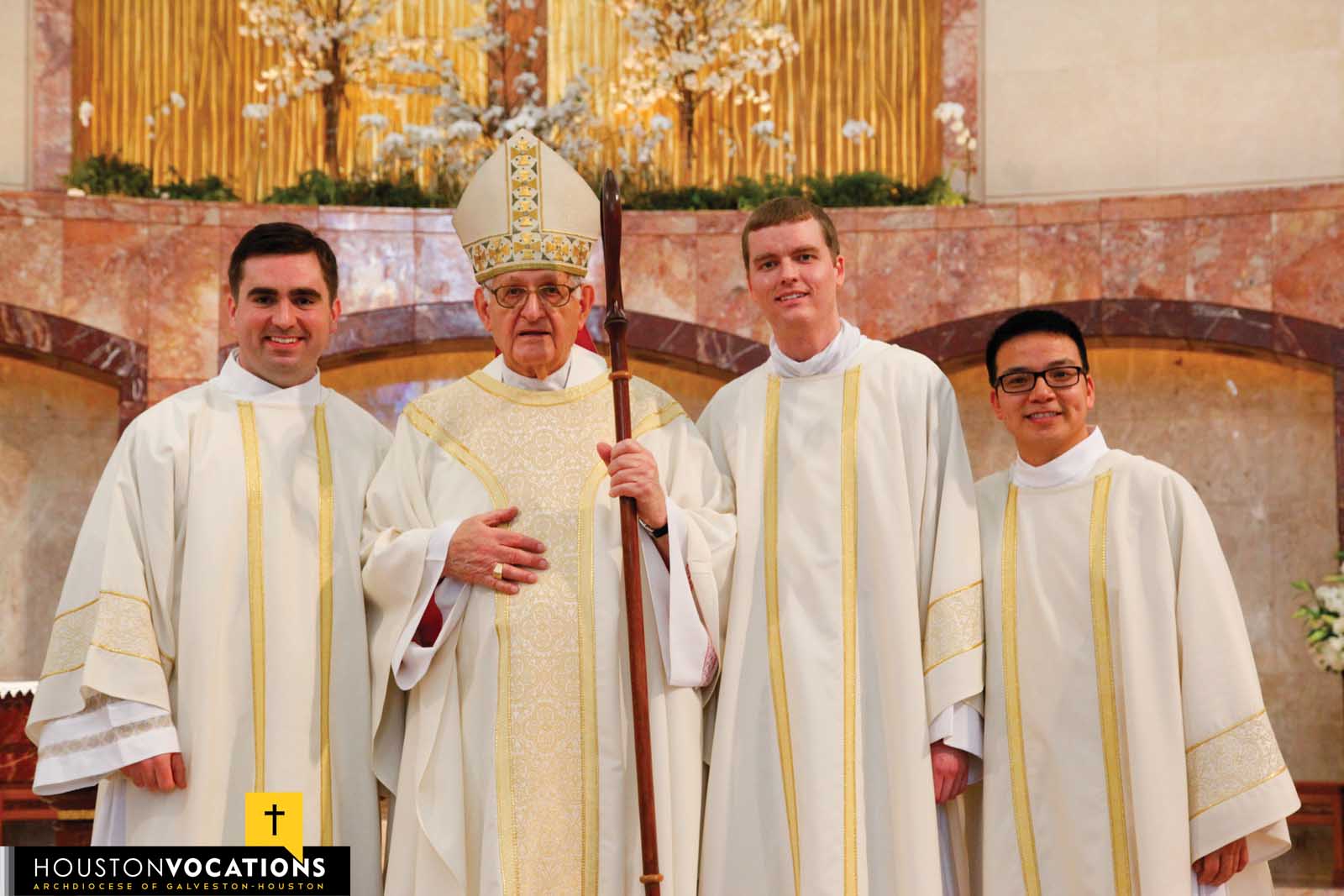 Deacons Michael Applegate, Jonathan Moré, Truong Son Nguyen and Michael McFall will be ordained into the priesthood at 10 a.m. on June 3 at the Co-Cathedral of the Sacred Heart, 1111 St. Joseph Pkwy. in downtown Houston.

Deacon Applegate was born in Hobbs, New Mexico, lived in Tulsa, Oklahoma, and currently resides in Kingwood, where his family has lived for more than 15 years. He is the third child of a family of four boys.

“My parents encouraged us to attend Mass as a family and to get involved with the Church,” he said. “I have always desired to serve others and that’s one of the reasons why I feel that God is calling me to the priesthood.”

Deacon Applegate said he really heard “the call” his junior year in high school, but was still his senior year.

“I was planning on going to college the next year and still discern, but somehow I emailed the vocation director at the time, Father Dat Hoang, and he told me to talk to my pastor Monsignor Chester Borski, who happened to be the rector of the seminary for 19 years,” he said. “So I set up a meeting with him and told him all about my story and he told me to just enter seminary to see if it was for me. If it was, then great, and if it was not then I can always leave. So I entered seminary that fall and I have been at peace since then.” 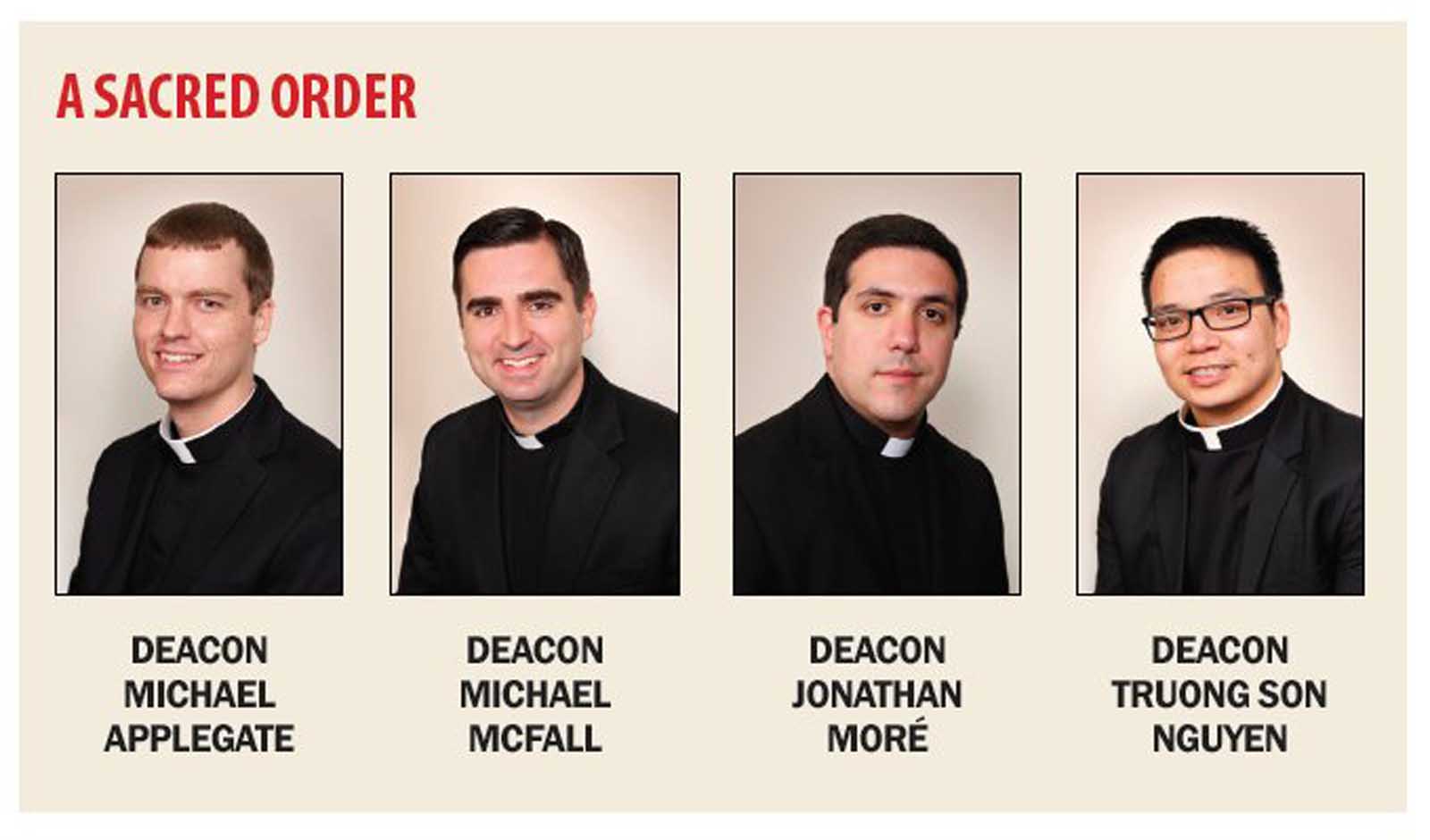 “As it turns out, I cannot stand chemistry,” he said.

Raised Catholic by devout parents, his first serious inklings of a call came in his early teens, but he felt it would be too early to confirm or decide and put off any real discernment until college, when he felt things would become clear.

“It was no sooner than my bags hit the floor in my room at the retreat house that I felt a deep peace and conviction that this was right and that my path forwards would take me to seminary and priesthood,” he said. “I finally made sense to myself, felt whole. That conviction has not wavered since.”

Deacon Moré said he can no longer see himself in the future as anything but a priest, nor would he have it any other way.

“I thank God for the many ways in which He has helped me along my way, especially the unexpected ones,” he said. “In hindsight, His hand was always present in my life, guiding me even as I lacked the trust to follow where He wished to lead.”

Deacon Nguyen was born in Bien Hoa, Vietnam. His family moved to America when he was 4 years old. He is from a family of seven siblings and he is the youngest.

He said one of the reasons he decided to enter into the seminary was that his parents were loving parents that always encouraged him to live a religious life.

“They did this mainly by setting examples such as being involved in church and showing me love when I most needed it,” he said.

“The second reason is that God has really blessed my family and me through many struggles and successes,” he said. “Lastly, the reason that really opened me up to God was finding peace and happiness in my heart after visiting St. Joseph Seminary.”

Deacon Nguyen received the call in Spring of 2010.

“It took two years of debating, but after my visit to St. Joseph Seminary College for a retreat, I felt at peace to make my decisions to enter the seminary and discern more fully for the priesthood.”

Deacon McFall was born and raised in Jasper, Texas, as the youngest of five children, three brothers and a sister. He was raised on a farm where they grew vegetables and raised cattle and honeybees. Deacon McFall is the first seminarian from the Archdiocese of Galveston-Houston to graduate from St. Joseph Seminary College.

He said there was never really a particular moment when he received “the call.”

“I always wanted to be a priest since I was in third grade,” he said. “I always loved learning and growing in my Catholic faith and I wanted to share my joy with others.”

After graduating from college, Deacon McFall spent six months volunteering in Honduras working at an orphanage with the Franciscan Friars.

“I felt drawn to the priesthood during my time in Honduras which led me into becoming a seminarian when I returned back to Houston,” he said.

Deacon McFall, who enjoys lifting weights, watching college football and playing chess, said he most looks forward to sharing the love of God with all people.

“Helping others to grow in their faith is the most satisfying part of my life,” he said.

Deacon McFall said the priesthood is a beautiful life and as men, they naturally want to be part of something greater than themselves.

“There is nothing more fulfilling than bringing the Sacraments to the people of God,” he said. “We need strong, healthy and masculine men to become spiritual fathers and lead others to follow Christ. As a priest, I will be able to help lead people to Christ in a very direct way through the Sacraments.”