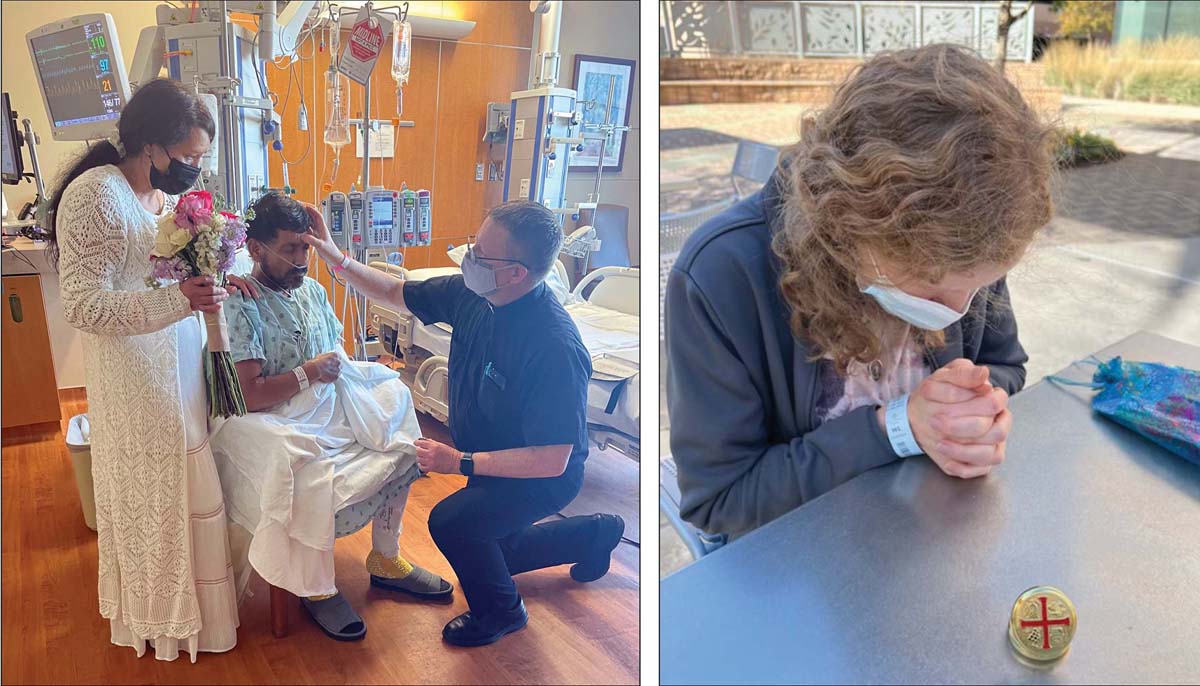 At left, Father Philip Wilhite, pastor from Sacred Heart Catholic Church in Conroe, kneels in a Houston Methodist Hospital room before his parishioners Tomas Gonzalez, in hospital gown, and wife Maria Angeles, to give the cancer patient an anointing of healing before convalidating their marriage. At right, Sarah Williams, whose son is being treated at Texas Children’s Hospital in The Woodlands, prays before a pyx containing the Eucharist as she meets with a chaplain to receive Communion in the courtyard because of COVID-19 restrictions. (Photos courtesy of Catholic Chaplain Corps)

Tomas Gonzalez, in his hospital gown, and wife Maria Angeles dressed in white carrying a bouquet of red and white roses, gazed at Father Philip Wilhite, their pastor from Sacred Heart Catholic Church in Conroe, as he knelt before them in the hospital room.

The priest dipped his thumb in chrism and anointed the forehead of 50-year-old Gonzalez for the Anointing of the Sick, a Sacrament. The couple’s 14-year-old daughter Nataly and an older family friend Francisca Cabello witnessed as Father Wilhite helped to convalidate her parents’ marriage as a Sacrament.

“I played a very small part in it. Tomas and Angeles have been together for 15 years and wanted to become closer to God through the Sacraments, but were never married by the Church,” Father Wilhite said. “They wanted to give the Christ Child their gift of a sacramental marriage and make that covenant with God.”
Shortly before the wedding, Tomas also received the Sacrament of Reconciliation and consumed Holy Communion given to him by hospital chaplain Father Desy Desmond of the Archdiocese’s Catholic Chaplains Corps (CCC).

His wife Maria Angeles said, “We put ourselves in God’s hands. If God needs him, He will take him. If He wills him to stay, he will stay with us. I have peace in my heart now.”

Lay chaplains Nannette Coons and Zoe Krizak, also of CCC, worked diligently to coordinate multiple details to get hospital permission for the ceremony in the ICU despite COVID-19 hospital restrictions. They double-checked that the family had obtained an official marriage license and other necessary paperwork as offices began closing for the holidays. They began checking with priests’ hectic schedules to give the Sacraments, especially during the very busy Christmas season, and they prayed for a miracle.

“The wedding was so beautiful to witness,” Krizak said. “Despite the circumstances, there was a lot of joy! The couple was so happy to be getting married.”

Coons also credits Krizak for her “relentless persistence” in maneuvering hospital policies to receive permission for the wedding, talking with nurses, social worker and hospital administrators.

“People kept saying ‘no’ because of restrictions, which we understood. But she would try again, going to the next person, to the next level, and kept knocking on doors until we finally had a “Yes!” Through Zoe’s powerful pastoral response, God gave us all His graces,” Coons said.

Gonzalez was discharged from the hospital and went home for the new year to be with family. He recently returned to the hospital after he and his daughter contracted COVID-19, but is now home again. Yet the family says they will share the journey ahead together no matter how stressful.

With this latest COVID-19 surge of Omicron around the holidays, most hospitals are again restricting only one visitor per patient.

“Some hospitals have whole units shut down because their staff is ill. The ones still working tell us that they feel forgotten now that the public has tired of dealing with COVID-19,” Coons said.

She added, “The nurses and doctors and other staff are saying ‘everyone’s forgotten about us, but we’re still here… we’re still comforting the dying and caring for families.’”

So to show that the community still cares, Coons asked her 67 commissioned pastoral visitors from the Conroe/Woodlands area coming from various parishes to support hospital ministry. Since the volunteers could not go inside the hospitals because of COVID-19 restrictions, they created care bags filled with prayer cards, handwritten letters, lip balm, snack treats and other goodies to boost medical staff morale.

“Since our pastoral visitors are restricted in visiting patients at this time, they were able to help create 10,000 care bags.” Coons said. “We delivered them to medical staff, housekeeping, social workers, any of those who are there for the patients.”

To recruit additional pastoral visitors, a spring training is scheduled. For more information and to register, visit www.archgh.org/chaplaincorps/training.