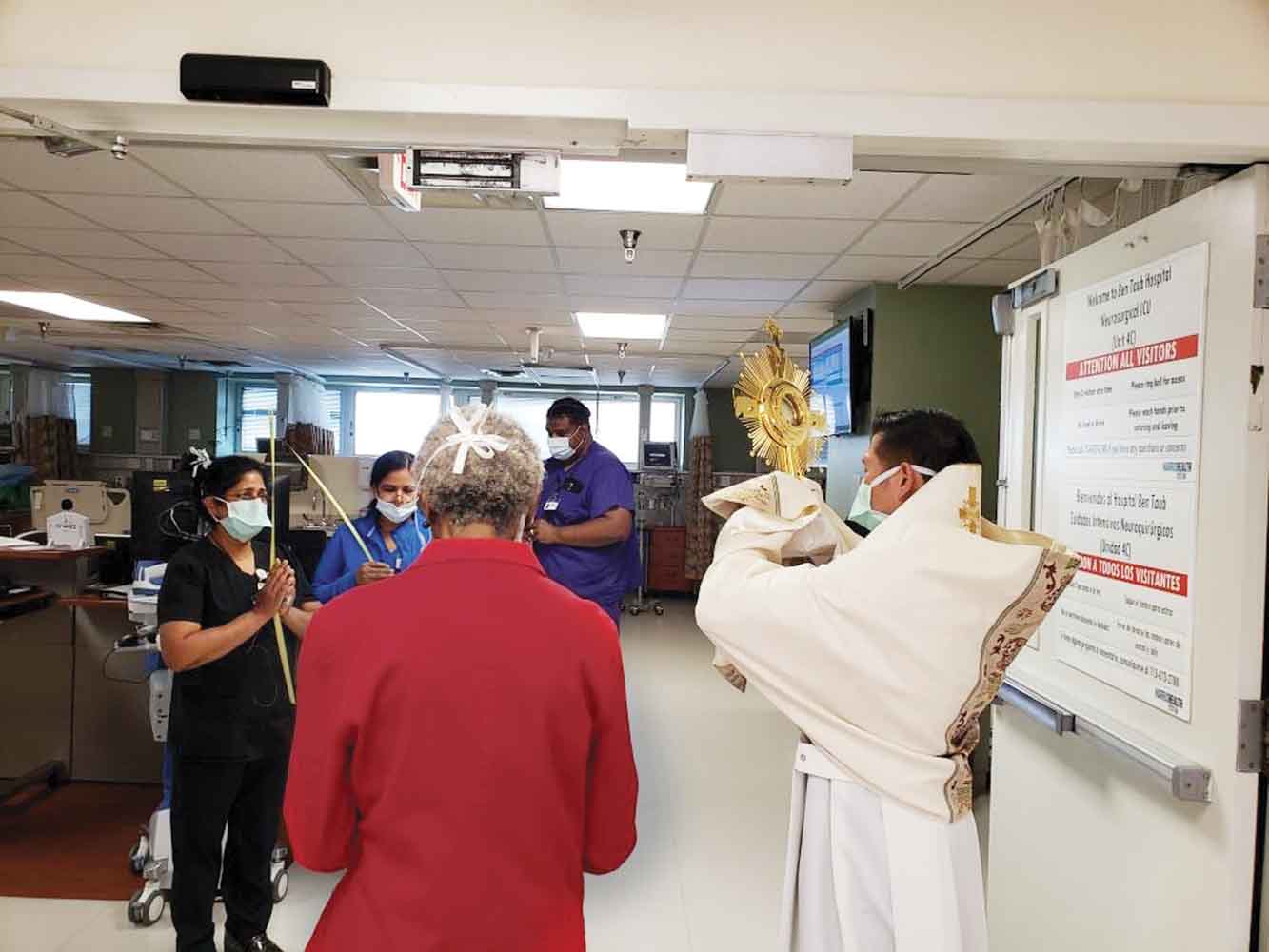 Father Ian Balisnomo of the Catholic Chaplaincy Corps elevates a monstrance with the Blessed Sacrament during a Eucharistic procession at Ben Taub Hospital in Houston on Palm Sunday, April 5. Carrying the Blessed Sacrament, Father Balisnomo processed through units to bless the staff and patients in isolation rooms. (Photo by Catholic Chaplaincy Corps)

“This disease is redefining so much. So, since we have a zero visitors policy, one of the first things was to order 100 iPads for staff to use with patients who need families but can’t have them here,” said Joel James, division senior vice president of Mission Integration at CHI St Luke’s Health.

“We have the boldest and most wonderful nurses on the planet. They show the families the patients on the iPads and iPhones with nurses holding hands with the patient — of course, gloved — that gives comfort. But they also give tons of referrals for spiritual care to our chaplains,” James said.

While much of the close-up work is done for the most severe cases, “a lot is also being done standing by the doorway,” he said. In normal conditions, chaplains would round with medical staff to see how both staff and patients are coping with the crisis.

“A lot of folks are working 12-hour days. While maintaining distancing, we still have daily huddles that start off with prayers and reflections. We always try to connect work with the bigger WHY are we here — to give people hope and dignity,” James said.

While almost all hospitals throughout the Archdiocese have shut down any outside clergy coming in as well as any visitors for patients, the Catholic Chaplaincy Corps (CCC) based in the Texas Medical Center (TMC) remains working in the hospitals, said CCC Director Denice Foose.

“Fortunately, in the TMC, our team of priests and lay chaplains are still present every day; thanks be to Jesus Christ. They are truly on the front line during this challenging time,” Foose said.

“They are able to hold virtual Mass in a couple of the hospitals that is live-streamed to the rooms. Father Ian Balisnomo took a monstrance and went to isolation rooms for Palm Sunday in Ben Taub Hospital. He stood outside the rooms so the patient could see. The CCC team is being very creative in how they continue to offer ministry and support not only patients but for staff as well,” she said.
Dr. James McDeavitt, dean of clinical affairs for Baylor College of Medicine, was quoted in the news comparing the surge projected to peak by the end of April or early May to a very, very slow-moving hurricane that has been sitting off the Gulf of Mexico.

“We don’t know if the eye’s going to hit us or we’re going to be hit by the outer bands. We have to be ready for both,” McDeavitt was quoted in the Houston Chronicle.

Patients truly appreciate the extra medical and spiritual care combo, with one survivor of COVID-19 writing to the Houston Chronicle specifically to publicly thank the nurses, doctors and staff at CHI St. Luke’s Health in Sugar Land.

The first identified Houston-area coronavirus patient, admitted March 3 to the CHI St. Luke’s Health in Sugar Land, was among the group who had recently returned from a Nile River cruise ship where 45-plus passengers contracted the virus.

The Fort Bend County man in his 70s, who wished to remain anonymous, wrote, “From the moment I was put in the ambulance and arrived in the ER, I could, half-consciously, feel a large group of healthcare workers fighting to gain time to save my life.”

He didn’t know all his medical team’s faces since they entered his room at St. Luke’s covered head-to-toe in personal protective equipment.

“They risked their own lives to save mine,” he wrote. “I will consider them my angels forever.”

On March 21, he was safely released home with his family.