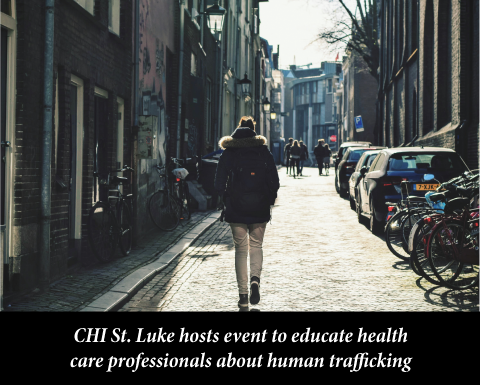 CHI St. Luke’s is hosting a lecture to raise awareness of human trafficking for those in the medical professions about the health-related consequences of trafficking and the industry’s warning signs. Photo courtesy of Tim Gouw.

HOUSTON — Human trafficking is a growing issue both nationally and internationally. According to the International Labour Organization there are 21 million victims worldwide, tens of thousands of whom are in the United States — it is an industry that generates an estimated $150 billion in profits by trapping millions of people in horrific situations. Unfortunately, Houston is a major hub for both labor and sex trafficking in the U.S.

As part of their national Human Trafficking Awareness Month initiatives, CHI St. Luke’s is hosting an event in hopes of bringing awareness to and educating medical professions about the widespread health-related consequences of trafficking and the warning signs they should be aware of.

The event, to be held from 7 to 11:30 a.m. on Thursday, Jan. 26 at Baylor St. Luke’s Medical Center’s, Denton A. Cooley Auditorium, will feature keynote speaker Dr. Laura Lederer, a leading scholar and activist against human trafficking, as well as a number of community-based public health advocacy and anti-human trafficking groups.

“We know that the healthcare community has been impacted by human trafficking survivors,” said Kimberly Williams, project coordinator for CHI St. Luke’s Spiritual Care Department. “Dr. Laura Lederer has conducted extensive research on the subject and found that all of the victims that she surveyed had seen a healthcare professional, but the healthcare professional was unable to recognize the signs of human trafficking and, therefore, did nothing to intervene in the physical, emotional or psychological well-being of the victim.

“We want our medical professionals to be equipped to know the warning signs and to assist with recovery of the victim,” Williams added.
Human trafficking victims can be both U.S. citizens and documented or undocumented foreign nationals, and of every age, race, gender, sexual orientation, religion and immigration status, according to groups tackling human trafficking.

On Jan. 13, with other city officials Houston Mayor Turner announced a campaign to combat human trafficking issues in Houston especially during Super Bowl LI on Feb. 3. In 2013, the Texas Attorney General’s office reported that almost 20% of all trafficking victims in the U.S. travel through Texas, usually on the Interstate 10 corridor with El Paso and Houston identified as major human trafficking centers. The figures are believed significantly underreported due to a lack of public awareness and human trafficking as an underground economy, according to Houston Mayor Sylvester Turner’s office.

“With training, the hospital setting allows our healthcare professionals to be uniquely positioned to detect the warning signs of human trafficking,” said Denice Foose, director of Mission at CHI St. Luke’s. “This event is open to all of our employees. Participants will learn the gravity of the human trafficking problem and how we can help victims with their healing and recovery.”

The event is free and open to the public. To report a suspected case of human trafficking, call the nongovernmental and confidential National Human Trafficking Hotline at 1-888-373-7888, or contact the BeFree text line by texting BeFree (233-733).

To learn more about the issue and what you can do to help locally, visit the Mayor’s Office anti-human trafficking website at humantraffickinghouston.org.

For more information about Polaris, and to find out how you can become involved in the fight against human trafficking, visit polarisproject.org.

BALTIMORE — In partnership with the United States Conference of Catholic Bishops (USCCB), Catholic Relief Services (CRS) is launching the “Turn on the Light” campaign to combat human trafficking, the modern-day form of slavery that Pope Francis has called “an open wound on the body of contemporary society, a scourge upon the body of Christ… a crime against humanity.”

The campaign coincides with Human Trafficking Awareness Month in January and with Human Trafficking Awareness Day on Jan. 11.
“There are 21 million victims of human trafficking worldwide today,” said Joan Rosenhauer, vice president of U.S. Operations for CRS, which is the official overseas humanitarian agency of the Catholic community in the United States. “In some ways, that means there are more people in slavery than at any time in history.”

The “Turn on the Light” campaign urges people to contact their Senators and Representatives to advocate for key anti-trafficking legislation and to purchase a “Turn on the Light” soy candle made by women who have recently resettled in the U.S. from refugee camps. Proceeds will support CRS’ work combating human trafficking and promoting ethical trade practices.