Celebrating the Class of 2019 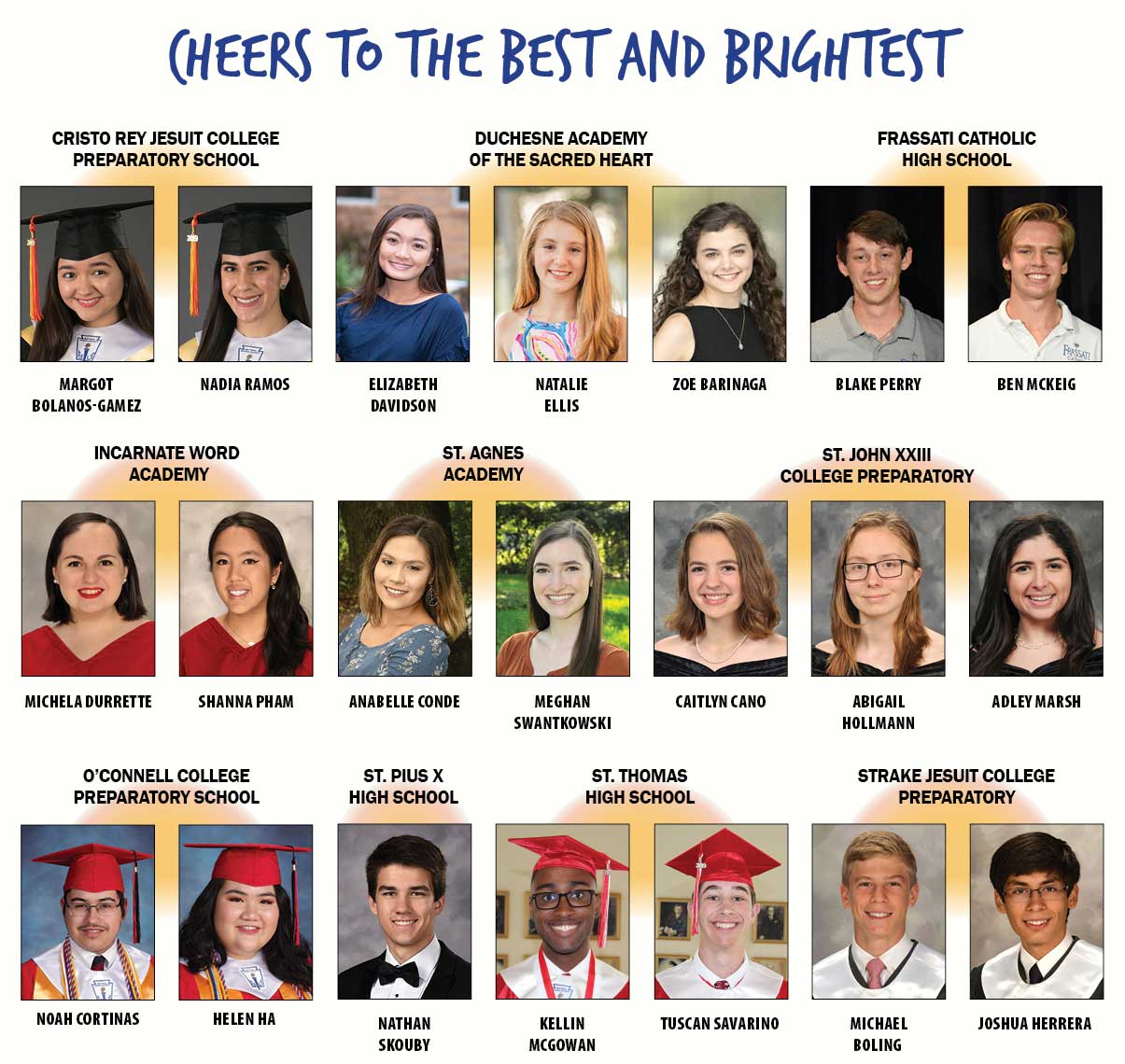 Graduation has come and for high school seniors, this is the summit of their childhood education. This summer these seniors will pack their bags and prepare to tackle their next climb — college, careers and life beyond high school.

The following is a glance into the hard work of the valedictorians, salutatorians and outstanding students — the best and brightest of the 1,234 total students attending the Archdiocese of Galveston-Houston’s 10 Catholic high schools — who excelled in their journeys in high school, going above and beyond the call of duty to be exceptional in academics and serve in their community.

Margot Bolanos-Gamez, one of the two oustanding students from Cristo Rey Jesuit College Preparatory School, will be attending the University of Chicago this fall as an Odyssey and QuestBridge National College Match scholarship recipient.

A National Honor Society member, Bolanos-Gamez has also been a member of The Woods Project since freshman year and a Council on International Education Exchange student for a language and culture program in Tokyo, Japan.

Nadia Ramos, the other outstanding student from Cristo Rey Jesuit College Preparatory School, will be attending Texas A&M University in College Station in the fall where she plans to study biomedical sciences with a minor in neuroscience and hopes to continue her studies in medical school to become a neuropsychiatrist.

Duchesne Academy of the Sacred Heart

The Duchesne Academy of the Sacred Heart 2019 Valedictorian, Elizabeth Maria Davidson, will be attending Duke University in the fall to study neuroscience.

Davidson was part of the field hockey team and track and field team during all four years, becoming captain for both teams her senior year. She was also a representative in student council, a tutor in National Honor Society, a high school leader in the Peer Support Program, and a counselor in the Heart of Summer Program. She was also in the Fishiness Club, which coordinated the freshmen orientation week, Duchesne’s first overnight freshmen retreat and the annual orientation dance.

Through a community service program at the school, Davidson took part in a variety of different projects through organizations such as the Co-Cathedral Outreach Ministry Program, the Caring Teen Program at Houston Methodist, the Sheridan Center, and the Community Service Club at the school.

One of the Duchesne Academy of the Sacred Heart 2019 Salutatorians, Natalie Renée Ellis, will be attending Wake Forest University in Winston-Salem, North Carolina in the fall to study biochemistry and molecular biology.

Ellis served as student body president this past year. She was also a leader in the Environmental Club, in the National Honor Society, and an extraordinary minister as part of the school’s Campus Ministry Program. Ellis also has been running cross country since middle school, serving as captain this year.

As part of the social awareness program at the school, Ellis tutored second graders at Cedar Brook Elementary School and assisted the elderly at the Forum at Memorial Woods. She also served at the Houston SPCA. In addition, Ellis was a museum docent for the Archeological Institute of America all throughout high school.

Tied for Salutatorian of the Duchesne Academy of the Sacred Heart 2019 graduating class is Zoe Isabella Barinaga. She will be attending the University of Florida in the fall to study biomedical engineering and minoring in computer science.
While in school she was involved in theatre (at Duchesne, St. Thomas, and Singapore American School), church/school choir, and SpaceLab (a research group in which she participated while living in Singapore).

She served the community through tutoring (via the Social Awareness program at Duchesne and National Honor Society both in Houston and Singapore). She has also been active in the pro-life movement, and recently started a pro-life club at Duchesne.

The Frassati Catholic High School 2019 Valedictorian, Blake Perry, will be attending the University of Notre Dame and major in business.

He has been active as an altar server, lector and sacristan at the all school liturgies, a founding member of the baseball team, was the creator and first editor of La Stampa, Frassati Catholic’s school newspaper, served as a member of the Student Leadership Team, as a student ambassador, as president of National Honor Society.

In the community, he has served the school on the Student Leadership Team and as a student ambassador. He was a member of both the football and swim team and a member of the National Honor Society.

McKeig volunteered with Conquest, a Catholic youth ministry program for boys, and was an assistant scout master with the Boy Scouts of America. Last fall, he was named a National Merit Commended Scholar.

The Incarnate Word Academy 2019 Valedictorian, Michela Durrette, will study mechanical engineering at the University of Houston Honors College on a full four-year scholarship from the Terry Foundation and hopes to work for NASA.

Durrette’s journey to the top of her high school class is particularly noteworthy because of her battle with a rare form of brain cancer that first appeared when she was in 6th grade at St. Elizabeth Ann Seton Catholic School.

In addition to her studies, Pham led the Asian Culture Club, participated in the Young Leaders Program, and took part in nine productions at St. Thomas High School Theatre.

Throughout all four years of high school, Pham volunteered at Loaves and Fishes, a soup kitchen downtown where she helped to prepare and serve food to the homeless.

The O’Connell College Preparatory School 2019 Valedictorian, Noah Cortinas, will be attending Texas A&M University in College Station in the fall.

The St. Agnes Academy 2019 Valedictorian, Anabelle Conde, will be attending Trinity University on a swimming scholarship to study math.

At St. Agnes, Conde is a National Merit Scholar and a champion swimmer.

The St. Agnes Academy 2019 Salutatorian, Meghan Swantkowski, will be attending the University of Notre Dame in the fall and major in biological studies.

Swantkowski was a leader on the Dominican preaching team, the Alzheimer’s Awareness Club and Diversity Club. She also spent several hours every week volunteering at a dance class for children with special needs.

The St. John XXIII College Preparatory 2019 Valedictorian, Caitlyn Louise Cano, will be attending the University of Notre Dame in the fall majoring in chemical engineering.

Since her freshman year, she has volunteered at Brookwood Community Center. This past summer, she expanded on her experiences and served as a mentor for a 22-year old special needs camper.

Adley received academic all-state for swimming, member of the State Championship Swim Team and was in National Spanish Honor Society and represented St. John at Texas Girls State. She also served as a Lion Ambassador and in the Link Crew, a group of students who helps new students on campus get situated and feel comfortable. She also tutored other students in math and devoted nearly 100 service hours to her community.

The St. Pius X 2019 Valedictorian, Nathan Skouby, will be attending Texas A&M University in College Station in the fall majoring in computer engineering.

During his time at St. Pius X, Skouby participated in cross country, track, swimming and baseball. He was the president of the National Honor Society and a member of the Student Honor Board. Skouby also volunteered with Students Serving Soldiers and was a crew member for various productions in Theatre SPX.

Skouby is an active member of his church community at St. Edward Catholic Church in Spring as an altar server and a volunteer at vacation bible school. He also occasionally volunteered at the St. Vincent de Paul food pantry at St. Anne Catholic Church Tomball.

The St. Thomas High School 2019 Valedictorian, Kellin Martin McGowan, is the first African-American valedictorian in the history of the school. He will be attending the University of Chicago to study law and pursue immigration law.
He was a member of the National Honor Society, the speech and debate team and St. Thomas Club. He was also a two-year Eagle Ambassador to prospective students and a tutor with the Academic Intervention Mentors Program, a peer academic tutoring program.

The St. Thomas High School 2019 Salutatorian, Tuscan Anthony Savarino, will be attending the University of Texas, majoring in engineering.

In the community, he was a counselor at Camp Blessing helping special needs children, assistant chief altar server at St. Anne Catholic Church and a tutor with the Academic Intervention Mentors Program, a peer academic tutoring program.

The Strake Jesuit College Preparatory 2019 Valedictorian, Michael Boling, will be attending Georgia Tech in the fall majoring in mechanical engineering.

Boling exceeded his required service hours by volunteering at Camp Blessing and Houston Food Bank as well as helping with incoming freshman placement exams and tutoring younger students in subjects like algebra II and AP macroeconomics. He also served as a Kairos Leader, assisting in both the individual and collective spiritual journeys of the students in the junior class.

Boling was involved in the National Honor Society, Athletes Taking Action and in the track and field team as a varsity pole vaulter.

The Strake Jesuit College Preparatory 2019 Salutatorian, Joshua Herrera, will be attending the Massachusetts Institute of Technology to study electrical engineering and computer science.

Outside of school, he primarily focused his energies on Lincoln Douglas Debate and was successful on both he local and national levels. Herrera was also a member of the National Honor Society and was a member of various cultural organizations on campus.