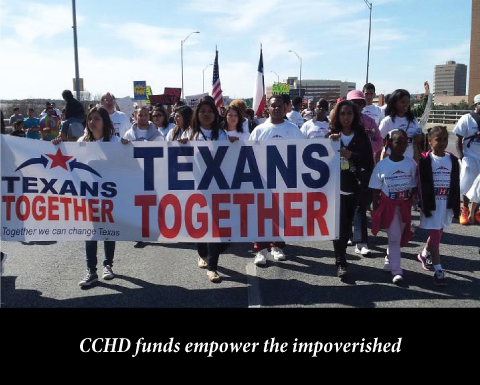 For a decade Texans Together, a non-profit agency actively engaged in underserved communities throughout the Greater Houston Area, has worked to identify neighborhood leaders and to empower them with the skills they need to organize for the good of their communities. Photo courtesy of Texans Together.

HOUSTON — It’s easy to get caught up in raucous national elections — important as they are — which make it easy to get distracted from the local political stage, where one can exert the greatest influence.

As Americans, the nation was founded on the principle that government begins at grassroots. It was to be organized from the ground up, not from the top down. As Catholics, this is fundamental to social teachings on subsidiarity, the principle that political decisions should be taken at a local level if possible, rather than by a central authority.

“How we organize our society — in economics and politics, in law and policy — directly affects human dignity and the capacity of individuals to grow in community,” the United States Conference of Catholic Bishops (USCCB) discerns. “We believe people have a right and a duty to participate in society, seeking together the common good and wellbeing of all, especially the poor and vulnerable.”

Organizing the poor and vulnerable is the mission of Texans Together, a non-profit agency actively engaged in underserved communities throughout the Greater Houston Area. For 10 years, Texans Together has worked to identify neighborhood leaders and to empower them with the skills they need to organize for the good of their communities.

“We believe that people become civically engaged to improve their communities and lives when they work to address issues that are personally important to them, learn concrete skills that allow them to address these issues and see measurable results from their efforts,” said Charhonda Cox, CEO of Texans Together.

For this important work, the USCCB’s Catholic Campaign for Human Development (CCHD) provides funds to help pay staff salaries for the non-profit.

“As American citizens and American citizens who are Catholic, our dual heritage is that we all have rights and duties as participants in the civil order,” Cox said, who added that CCHD funds “allow Texans Together to continue civic engagement and participation in society to effect social change for the common good with moral responsibility. With this continued support, we will continue to help the poor and underserved, and teach those who have become hopeless the leadership skills they need to change their lives and communities.”

She quotes Pope Francis, who in 2013 said: “We need to participate for the common good. Sometimes we hear ‘a good Catholic is not interested in politics.’ This is not true. Good Catholics immerse themselves in politics by offering the best of themselves so that the leader can govern.”

“They are very much in keeping with the mission of the Catholic Campaign for Human Development,” said Deacon Sam Dunning, director of the Archdiocese’s Office of Justice and Peace, whose role includes administration of CCHD grants. “They really empower people in the neighborhoods in which they are working to help them help themselves, to break through the cycle of poverty and the obstacles that prevent people from improving their own neighborhoods.

Dunning cited a workshop in which Texans Together focused on training residents on how to effectively advocate their concerns about their neighborhood schools before local school board members. “It’s not about being strident. It’s about being well-informed, confident and addressing specific issues. This is where I’ve seen Texans Together be very effective.”

“The more people involved, the more political leaders are going to pay attention to them. That’s where organizations like Texans Together are able to help. They bring people together around a common cause. They speak a common voice to pursue a common goal. Speaking of our social teachings of the Church, we believe that brings about better [outcomes] for the common good.”

Annual CCHD collection Nov. 20
On Sunday before Thanksgiving Day — this year Nov. 20 — is the annual national collection for the Catholic Campaign for Human Development (CCHD). The CCHD addresses the root causes of poverty in America through promotion and support of community-controlled, self-help organizations and transformative education. Grants are awarded by the Subcommittee on the CCHD with the approval of local bishops.