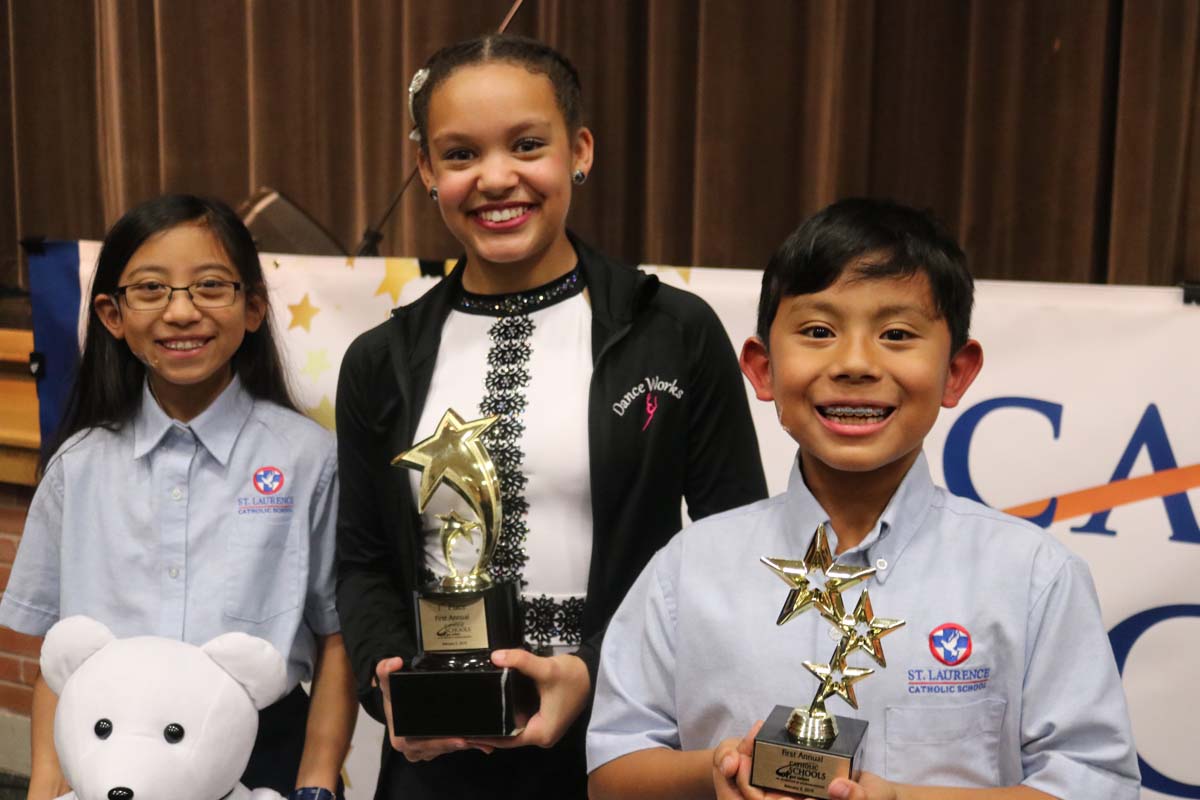 HOUSTON — Entering St. Pius X High School, it could have been easily mistaken for a normal school day. Students rushing through the halls, music floating out of a practice room in the distance, an auditorium beginning to fill up in anticipation. But this was a Saturday and school was not in session. It was the inaugural Catholic Schools Got Talent for Catholic Schools in the Archdiocese of Galveston-Houston for students fourth through eighth grades.

After an Art Walk that featured artwork from students, the live event Feb. 2 opened with a group of Catholic school principals, dressed in full academic regalia, with a dance routine to the perennial classic, “I Will Follow Him,” on stage.

As the evening continued, the show displayed not only the exceptional talent of the participants, but also the stunning character in each student-competitor, who were cheering each other on backstage.

Lorenzo Villamayor, of St. Theresa Catholic School in Houston, rocked the house with his “Our Father” drum solo, performing with ease and stage presence of someone four times his age, highlighting the originality of some of the acts.

When asked why they chose to enter the Catholic Schools Got Talent competition, pianist Ana Granados from St. Theresa Catholic School in Sugar Land, who dazzled the audience with her rendition of Richard Marx’s “Right Here Waiting,” said she wanted to let people know that students in Catholic schools are happily sharing their gifts with others.

Asked if she had any tips for students who might apply next year, Granados said, “They should definitely do it and come and have the great experience of playing for their peers.”

Brother and sister act, Nico and Gabbi Arenas, who lent their vocal stylings to the Broadway hit “When I Grow Up” from Matilda the Musical, also shared how much they love their school, St. Laurence Catholic School in Sugar Land.

Gabbi said, “I love that it is Catholic and that it incorporates our faith into all of the other core classes. Even if we’re talking about science, we’re also talking about how Jesus saved us.”

Olivia Bogard, an eighth-grade singer-songwriter performing a world-premiere original song from St. John Paul II Catholic School, had some sage advice when asked what she would tell a student who might like to join in next year but may be shy of performing in front of an audience.
“Participating in Catholic Schools Got Talent gives you experience and helps you with your stage presence and to not be nervous on stage,” she said. “That’s why I think they should participate. That’s why I’m doing it and to just have fun.”

At the end of the show all the finalists took the stage to sing “I Can Only Imagine” together.

When Judge Larry Massey, president of the Scanlan Foundation, took the stage to announce the top three acts of the evening and present the students with their prizes and Catholic Schools Got Talent Holy Bears from The Holy Bear Company, it was announced that in the top three there was a tie.

Tied for third place were Villamayor and Bogard, with second place going to the Arenas siblings, and the top winning act of the evening was Ashlee Allen, a seventh grader from St. Laurence Catholic School, for her rhythmic dance routine titled “The Arena.”