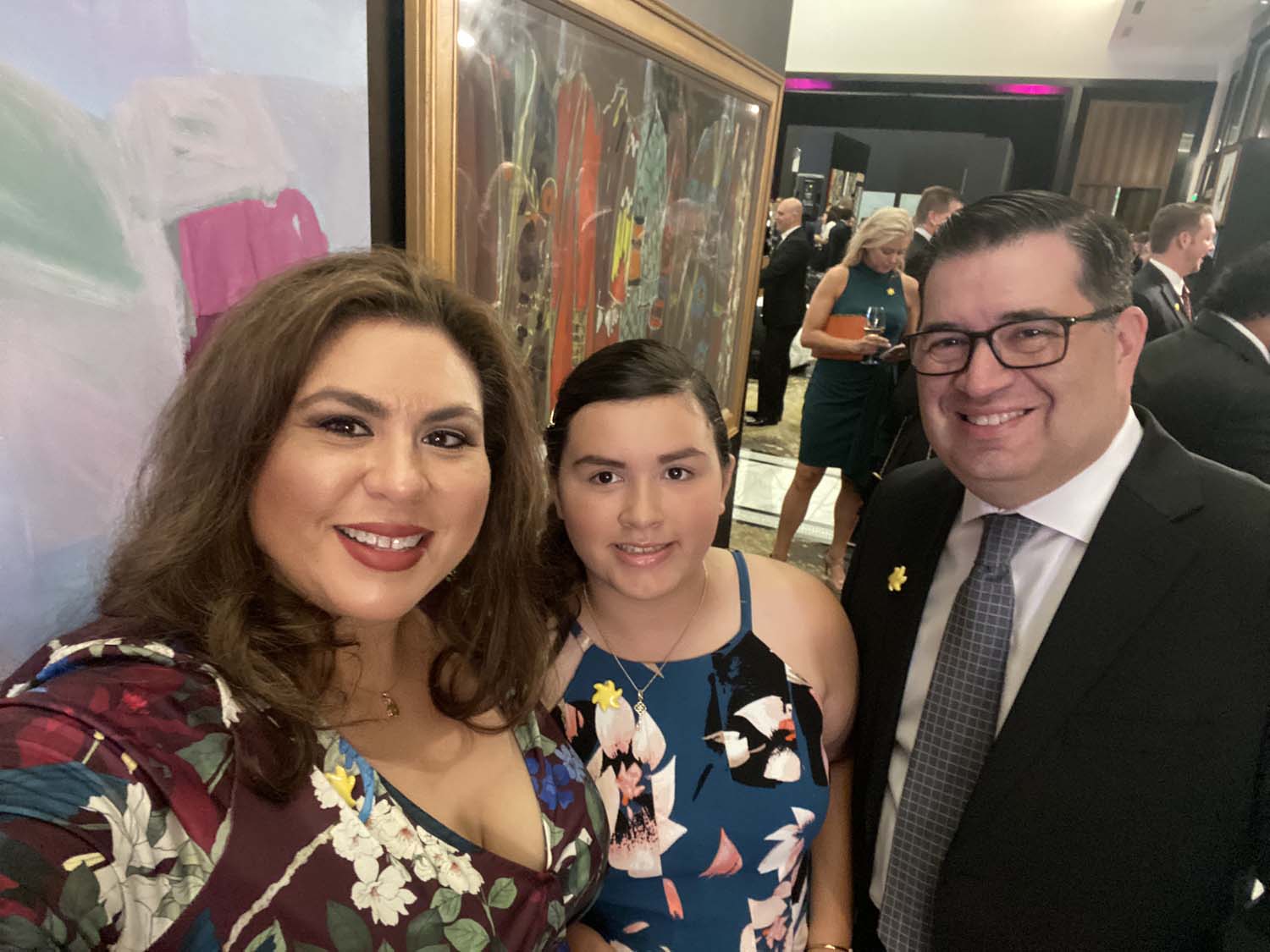 St. Theresa Catholic school student Cecilia Trevino, in center, seen with her parents Melissa and Jorge Treviño, started a toy drive fundraiser for pediatric patients. Herself having to deal with multiple surgeries and treatment for a brain tumor, Ceci created her foundation CeciCares.org to bring smiles to hospitalized children at local Texas Children’s Hospital campuses, Memorial Hermann Children’s Hospital and The Sunshine Kids. (Photo courtesy of the Treviño family)

HOUSTON — Dealing with a non-malignant but golf ball-sized brain tumor since she was eight years old, Cecilia Treviño, now 12, has worked for the past three years to make other pediatric patients smile.

“When I was in the hospital, I received toys, and it really helped me forget for a little while what I was going through. So I wanted to help other kids,” Ceci said.

Her parents, Jorge and Melissa Treviño, said they discussed her possible toy donation project with her doctor at Texas Children’s Hospital, Dr. Frank Y. Lin, who thought it was a great idea.

Now her website, CeciCares.org, is officially a nonprofit organization. She has seen her wish list grow from distributing 350 new toys in the first year, then doubling to 700 in the second year of the COVID-19 pandemic.

This past Christmas, her foundation was able to donate more than 6,000 new toys and $600 in gift cards to pediatric patients at Texas Children’s Hospital campuses in the Texas Medical Center, The Woodlands and Katy, as well as Memorial Hermann Children’s Hospital and The Sunshine Kids.

Ceci said, “I want them to know they’re not alone. I feel like I’ve grown up and gotten stronger and now have more faith. I know that God is going to be there for us.”

Strong words for a seventh grader at St. Theresa Catholic School at Memorial Park. But it’s been a long journey. Back on Feb. 6, 2018, Ceci started vomiting and having headaches. Her parents thought she had caught the flu and took her to her pediatrician and an urgent care clinic. When she began seeing double vision, her pediatrician recommended an MRI.

The scan at Texas Children’s revealed a pilocytic astrocytoma, a tumor benign at the time. But the size at 1.7 inches was big enough to block the fourth ventricle of her lower brain, filling it with cerebrospinal fluid.

“The sheer mass of the tumor was backing up fluid like a kinked hose plugging up the flow. The pressure was too high,” Lin explained.

So within that same month, Ceci was wheeled into an operating room for an eight-hour emergency surgery to remove the tumor.

“She’s our little hero,” said her mother, Mrs. Treviño. “She surprised us all with how positive she stayed. She gave us the strength to continue to go through this. Our family has grown closer.”

Even though the cure rate for this type of tumor is higher than 90%, Ceci is not in the clear yet. Lin is monitoring remnants of the tumor on sensitive areas on top of Ceci’s brain stem and nodules intertwined on her spinal cord.

They are slowly growing and may need future intervention, whether additional surgery, chemotherapy, or other targeted treatment. But he is impressed with Ceci’s positive attitude and perseverance.

“To find such a child who can face unimaginable challenges and turn a dark experience to bring joy to others is amazing,” Lin said.

Her brave and generous spirit has also caught the attention of the media, with both the Houston Chronicle and KTRK ABC 13 news interviewing Ceci, her family and medical staff recently.

Ceci’s hospital case is not keeping her from being active — she plays on the school’s volleyball team and just started cheerleading this year.
St. Theresa’s director of athletics, Scott Sugalski, said, “Ceci has always had such a caring heart, and I am so proud of all of her accomplishments.”

Plus, she remains an avid golfer with the South Texas Professional Golf Association children’s program called the Little Linksters.
Playing golf is good for Ceci’s physical therapy, boosting hand-eye coordination, according to Lin. This type of brain tumor can have long-term effects on balance, strength and coordination but not fertility or life expectancy, he said.

Mr. Treviño credits the toy project’s success to their Church family support, her Catholic school support, hospital staff and their network of work and friends — he calls them all “Team Ceci.”

“We wouldn’t have made it without them. Faith is really important for us and our growth,” he said.

Mr. Treviño listed several spiritual advisors, including Father Paul English, formerly with St. Anne’s Catholic Church on Westheimer, where the Trevinos are parishioners and now a chaplain at the University of St. Thomas. He also named Father Phil Lloyd, pastor at St. Theresa Catholic Church and School, and Deacon Tom Piotrowski, Ceci’s theology teacher at St. Theresa, as all helping to guide the family through tough times.

The community turned out again at a recent fundraiser at Sylvia’s Enchilada Kitchen, 6401 Woodway, on Oct. 22, where about 150 people paid $50 each for dinner and three games of Loteria, Mexican bingo, to win prizes and to bid on live and silent auction items.

They raised about $9,000 for not only more toys but for baby items and gift cards for teen patients to include them in the overall toy drive project. The foundation places a small sticker on each toy, stating it is a gift from CeciCares.org.

Her mother said, “A couple of months ago, Ceci and I were coming home from golf practice, and her dad shared a photo that a parent had sent to our foundation. It showed how happy their child was to receive one of our toys. We looked at this picture, and we both just started crying.”

Her father added, “We are all called to be saints, but Ceci is well on her way.”

For more information or to donate to the project, visit www.CeciCares.org.