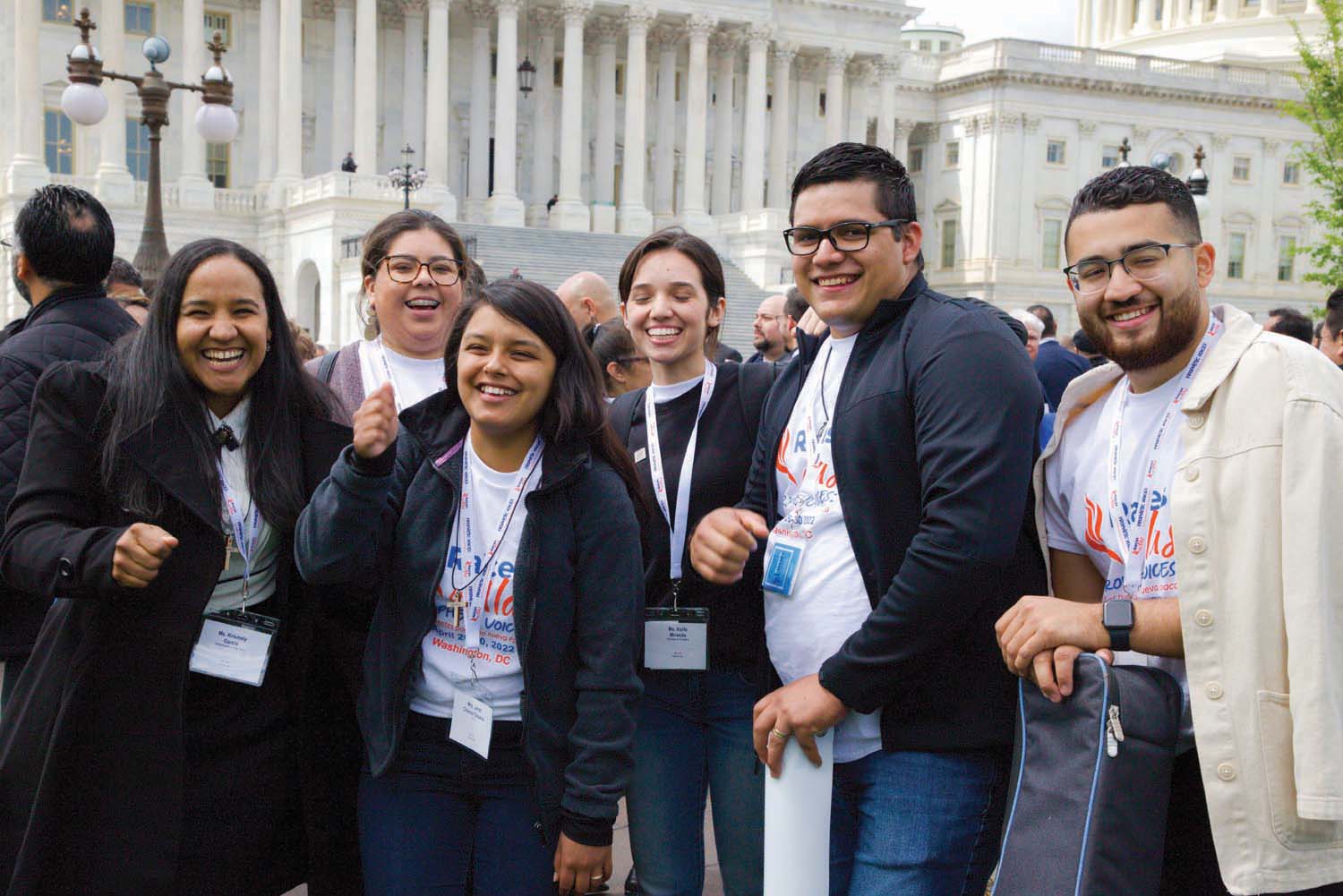 Kimberly Garcia, Guadalupe Saez, Janet Chávez España, Karla Miranda, Alejandro González and Marvin Molina from the Diocese of Arlington, Va., pose for a photo near the U.S. Capitol in Washington on April 27 during the Raices and Alas advocacy day. (CNS Photo)

WASHINGTON (CNS) — Leaders in Hispanic Catholic ministry who gathered in Washington on April 26 to 30 for a national meeting used the occasion to head to the halls of Congress in between meetings to push lawmakers on some form of relief on immigration.

“Citizens and noncitizens alike, we are brothers and sisters in the eyes of Jesus Christ, and our current immigration system is burdensome, expensive, inefficient and far too often creates human suffering,” said Auxiliary Bishop Mario E. Dorsonville of Washington on April 27 on the grounds of the U.S. Capitol.

Along with other bishops and leaders in ministry gathered for the sixth Raices y Alas (Roots and Wings) national congress in Washington, Bishop Dorsonville asked lawmakers to use their political power and responsibility to “address these issues” that force millions to live in hiding except when it comes to contributing with their work to the welfare of the nation.

Bishops and other people of goodwill in the United States have been advocating for a just and comprehensive immigration reform, but to no avail, he said.

“We come in prayer to ask members of Congress, Republicans and Democrats, to work together to create solutions,” he said. “Immigration reform cannot wait any longer.”

Representatives Dan Newhouse, R-Wash., and Salud Carbajal, D-Calif., joined the Latino Catholic leaders at the event at the Capitol.

Both politicians have worked on the Farm Workforce Modernization Act, which seeks legal status for farmworkers, seeks reforms to the H-2A agricultural guest worker program and “creates a first-of-its-kind, merit-based visa program specifically designed for the nation’s agricultural sector.”

But each approached it from a different point of view.

“We need a system that stops rewarding illegal behavior,” Newhouse said, who also seemed to support some type of immigration help for “children, who through no fault of their own,” were brought into the U.S. illegally as minors.

But any bill would also have to support measures to strengthen national security and secure the southern border, he said.

“I’m so tired of empty promises, and I’m sure you are tired of that, too,” he said. “We have to have a system that works for the business (sector), farmers and ranchers ... and for our immigrants.”

Carbajal said that while the two had differences in certain areas of policy, they agree on the importance of finding solutions.

Channels that previous immigrants, “our forefathers and mothers who came to this country,” had used are broken, creating a bottleneck, Carbajal said.

He thanked the Catholic ministers for organizing a day of advocacy between meetings, urging them to reach out to lawmakers from both sides of the aisle.

“This shouldn’t have to be a partisan issue,” Carbajal said. “We should be able to work together.”

Andrea Anaya-Sandoval spoke about the urgency she feels when it comes to immigration reform. Though she’s temporarily protected as a recipient of the Deferred Action for Childhood Arrivals immigration policy, she said there’s no permanent solution in sight for what will happen when she graduates from college in a couple of years.

“It’s been disheartening for young people like me to see how little has been done” when it comes to immigration reform, she said. “I stand before you today because I’m tired of the promises ... I’m exhausted from waiting around for legislators to decide whether I am good enough.”

Also present at the event, Emilce Cuda, Secretary of the Pontifical Commission for Latin America, said “immigrants are not tourists,” but rather they contribute to countries as workers and shouldn’t be discarded by society.

She asked that they be provided better social conditions to survive and thrive in their adoptive countries.
Elisabeth Román, president of the National Catholic Council for Hispanic Ministry, which organized the Raices y Alas gathering, said the organization picked Washington as the site of the event so the more than 400 members from more than 38 states could advocate for matters of social justice, which includes immigration, and to speak for essential workers who kept the country moving during the pandemic.

“We came here with our pastors, our bishops and not for partisan politics,” she said. “That’s why we stood here with a Republican and a Democrat because there are Catholics on both sides of the aisle.”
She urged Latinos in the country who are U.S. citizens to use their voting power.

“What is happening ... is unacceptable,” she said. “And it’s time to do something.”