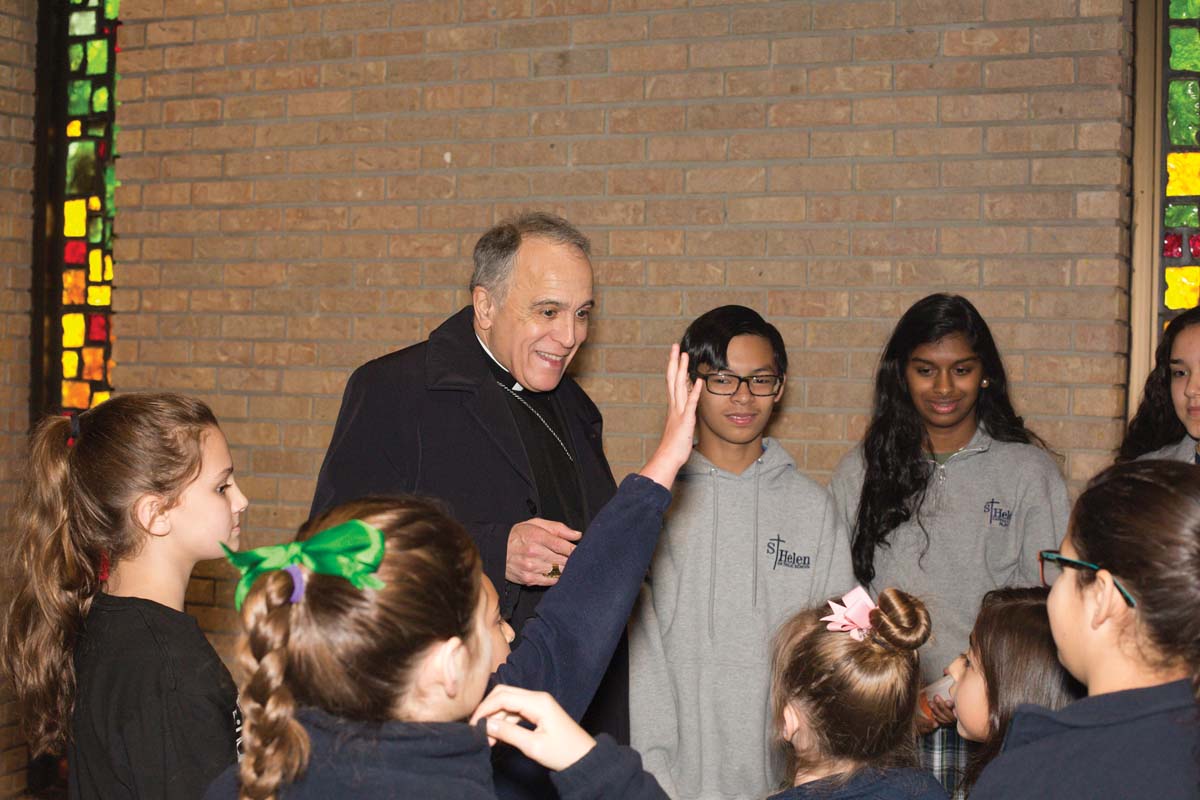 HOUSTON — National Catholic Schools Week is currently being celebrated across the country from Jan. 27 to Feb. 2 with the theme: “Catholic Schools: Learn. Serve. Lead. Succeed.”

In the Archdiocese, observe the week with Masses, open houses and other activities for students, families, parishioners and community members.

St. Rose of Lima Catholic School used social media in the week leading to CSW to show the kids a video of the baby pigs training for their race this week. The toy piggies are racing throughout the week with the exception of Thursday, with the finals taking place on Friday. Other activities at the school include dressing like the student’s favorite talent and Teacher Look Alike Day.

Students at Corpus Christi Catholic Catholic School are preparing for one of their favorite annual events on Friday, Feb. 1.

The game is between Team McCoy, led by Principal Mazie McCoy, and Team Smithson, led by Pastor Father Tom Smithson, SSS. Students from third to eighth grade sign up to be a part of the game during a pre-auction sign-up party.

“The Pastor/Principal Basketball Game is an annual event, which the kids really look forward to,” McCoy said. “This year will be the 5th game and I’m proud to say that Team McCoy has won every year!”

The NCEA has daily themes that each school can follow to bring to light how students and teachers are communities of leadership, knowledge and service.

Sunday’s theme was “Celebrating Your Parish”: Catholic schools benefit all year long from the religious guidance, prayers and support parishes provide. Many parishes join in the National CSW celebration by devoting a Mass to Catholic education.

Monday’s theme was “Celebrating Your Community”: A central aspect of Catholic education is learning the importance of service to others. When students take part in service activities they demonstrate the values and faith gained through Catholic education.

Tuesday’s theme was “Celebrating Your Students”: Schools celebrate students during National Catholic Schools Week by planning enjoyable and meaningful activities for them and recognizing their accomplishments.

Wednesday’s theme was “Celebrating the Nation”: On National Appreciation Day for Catholic Schools, students, families, educators and other Catholic school supporters communicate the value of Catholic education to government leaders.

Thursday’s theme was“Celebrating Vocations”: By focusing on faith, knowledge and service, Catholic schools prepare children to use their God-given talents to the fullest later in life. National CSW offers an opportunity for students to explore the many life paths that enable them to use their talents well in the service of God and others.

Friday’s theme was “Celebrating Faculty, Staff and Volunteers”: On this day, schools will honor teachers and principals as well as administrators and staff who support them in their important work and thank the parents, grandparents, alumni, parishioners and school board members who provide volunteer service.

Saturday’s theme is “Celebrating Families”: Parents, guardians and other family members play a vital role in Catholic education. Not only do they volunteer at the school, they instill values and expectations for academic excellence in their children at home.

During the week, Catholic schools plan to share their CSW celebrations on social media using #CSW19. The NCEA and the USCCB education secretariat also will highlight Catholic education’s strengths, successes and stories on their Twitter profiles: @NCEATalk and
@USCCBCatholicEd.

To learn more about Catholic Schools in the Archdiocese of Galveston-Houston, visit www.choosecatholicschools.org.

PEARLAND — Daniel Cardinal DiNardo spoke to pastors and principals, part of the team overseeing 60 Archdiocesan Catholic schools gathered for a State of Catholic Schools Jan. 16 concerning their more than 18,000 students.

“Religious Catholic faith has to shine through our schools,” Cardinal DiNardo told the group. “We are not a [non-governmental organization.] We are the Church and our schools and our catechism keep tradition alive.”

“Society has an anti-theology stance while we celebrate theology together through our past, present and future,” he said.

Cardinal DiNardo mentioned the difficult task ahead of releasing the list of those priests accused of sexual abuse, but he held the schools up as a light in the darkness.

“Our Catholic schools offer hope and stability. They are a great source of consolation,” said Cardinal DiNardo at St. Helen Catholic School in Pearland hosting the event.

Catholic Schools Superintendent Debra Haney said, “The time is now to let Christ be the builder. Parents are our best advocates.”

She applauded how more teachers and principals are also becoming certified catechists to incorporate that joy within their academics.

Students from St. Helen demonstrated some of their talents, acting out an anti-bullying program. They showed how to include a student in a wheelchair, playing a game of catching a ball with her rather than ignoring or teasing her. Of her pre-K3 through eighth graders, St. Helen Principal Phyliss Coleman said, “We are upstanders, not bystanders.”

“Make your strategic planning a living document with target completion dates,” she recommended.

In taking smaller groups for tours of the school, St. Helen pastor Father Jim Courville described a recently installed security system. Only six school officials have key fobs that can lock down the school in an instant, securing doors and initiating both audio alerts as well as flashing blue lights for those hearing impaired to know to take shelter.

“The Santa Fe High School shooting happened not too far from us, but we already had this security system installed right before then. Our students’ safety comes first,” Father Courville said.