Catholic Charities: Faithfully serving those in need for 75 years

By Cynthia Colbert, Special to the Herald 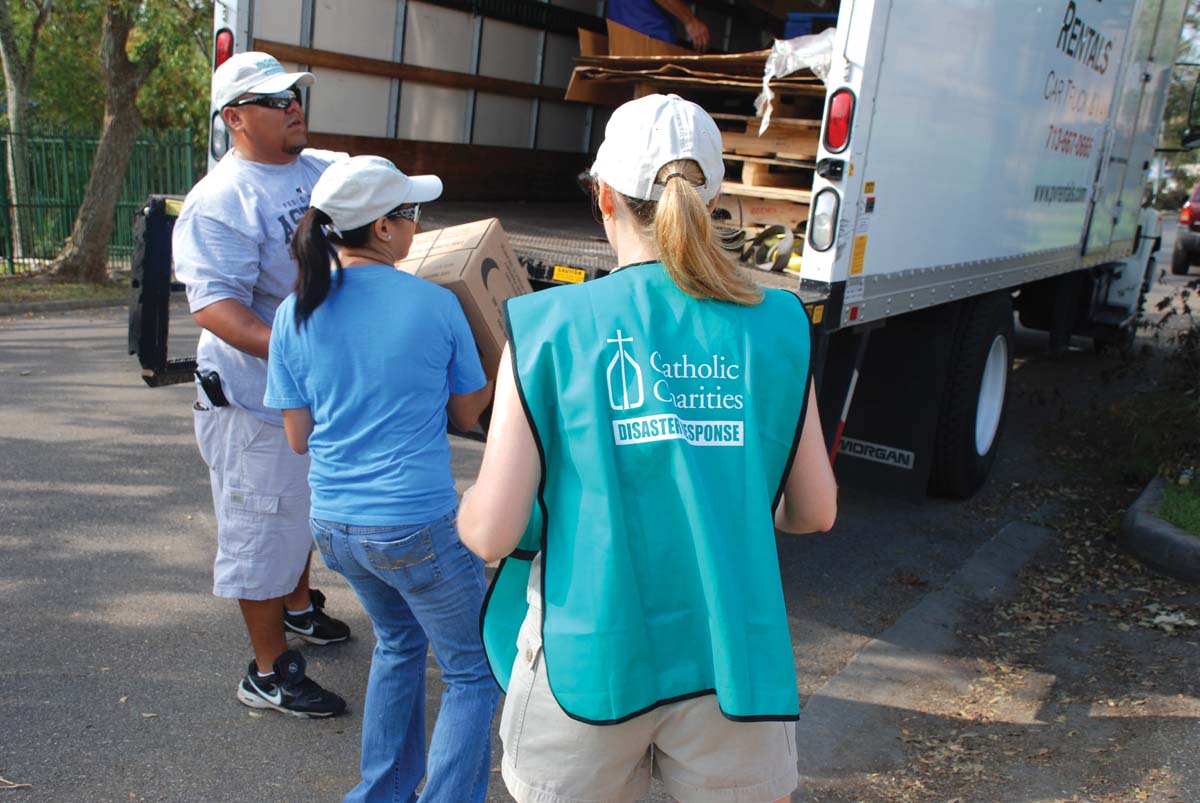 HOUSTON — In the midst of World War II, Bishop Christopher Byrne, bishop of then-Diocese of Galveston, began discussions with Father John Roach about the desperate needs of the Galveston-Houston community.

The nation was war-torn, hungry, tired and unsure about the future. Families had endured long separations, the strains of the Great Depression and the brokenness war left behind. People across the region were searching for help with basic needs and a way to restore peace and security.

Those early discussions between the bishop and the priest led to the founding of Catholic Charities of the Archdiocese of Galveston-Houston in 1943, with Father Roach serving as the first executive director.

Today, the social services arm of the Archdiocese has expanded to serve people across the region, including Greater Houston, Galveston, the Texas City-Bay Area and Fort Bend County.

Founded on the principle that people of faith can and should help people in need achieve self-sufficiency and live with dignity, Catholic Charities has continued to live that mission.

In 1975, Catholic Charities —recognizing an unmet need to welcome Southeast Asians arriving in the U.S. after the fall of Saigon— started the Refugee Resettlement program as a parish-based initiative. This program continues today within the agency, and has expanded its work dramatically.

In the midst of the HIV/AIDS crisis of the 1980s, Catholic Charities began caring for HIV/AIDS clients through the AIDS Ministry program.

In 2001, in response to Tropical Storm Allison, Catholic Charities opened the Disaster Recovery program that has helped so many Houstonians through the years.

In response to the growing population of homeless veterans, Catholic Charities began a specialized program for women veterans in 2012. This program continues to expand to meet the physical, emotional and social needs of women veterans – and to help them live independently, with dignity.

When Harvey ravaged Houston last fall, Catholic Charities stepped up again – providing immediate help to thousands in need and working with families for the long term as they recover and put their lives back together.

Led by Daniel Cardinal DiNardo, the Catholic Charities staff is honored to continue the legacy of love and support for Houston started in 1943.

Catholic Charities is here for seniors, young moms who need guidance, immigrants, the working poor, children escaping torture who need a home and people recovering from the devastation of storms or other disasters.

Catholic Charities still continues its mission begun 75 years ago – to serve those in need – and remains always ready to respond to the community. Catholic Charities is steadfast in its commitment to the dignity of all people, and is humbled to serve as Christ’s hands and feet, helping others as Christ guides all.

Catholic Charities of the Archdiocese of Galveston-Houston is celebrating its 75th anniversary with “Happy: A Spirit of Charity Celebration” gala event on May 12 at 6:30 p.m. at the Marriott Marquis Houston, located at 1777 Walker Street.
The landmark event will celebrate 75 years of providing help and creating hope to those in need and honor Trini Mendenhall with the inaugural Legacy Award for her support, philanthropy, dedication and leadership to the Catholic Charities mission to help people in need.

This year’s event will commemorate Catholic Charities’ birthday by filling the ballroom with bright colors and the live music by Houston party band Doppelganger.

The event is the largest fundraising event for Catholic Charities. Proceeds from benefit individuals and families in the Greater Houston region. Catholic Charities, a nonprofit agency, provides a comprehensive network of social services to the local community aimed at facilitating self-sufficiency and alleviating poverty. The group serves people from all walks of life and from any cultural or religious background.

For more information and tickets, contact Naibi Rivera at nrivera@catholiccharities.org or 713-874-6629.

GALVESTON — A new program for women veterans and a disaster services program was introduced March 22 during an open house at Galveston Island Community Center, presented by the Galveston Bay Area office of Catholic Charities of the Archdiocese of Galveston-Houston.

The new dsaster recovery services and veterans services programs will carry out the organization’s mission to provide help and create hope.

“Catholic Charities of the Archdiocese of Galveston-Houston has served the Galveston community through every major natural disaster since 1943, and the organization has supported individuals and families in the midst of personal disasters as well,” Cynthia Colbert, president and CEO of Catholic Charities, said. “From the working poor to the medically disabled to struggling veterans, Catholic Charities has been there in times of suffering, helping people in need achieve self-sufficiency and live with dignity.”

Matthew Johns, director of disaster recovery services, discussed the progress being made and the organization’s plans to establish a long-term disaster presence. LaShondra Jones, program coordinator of the women veterans services program, shared the program’s services and how the program will benefit the Galveston community.