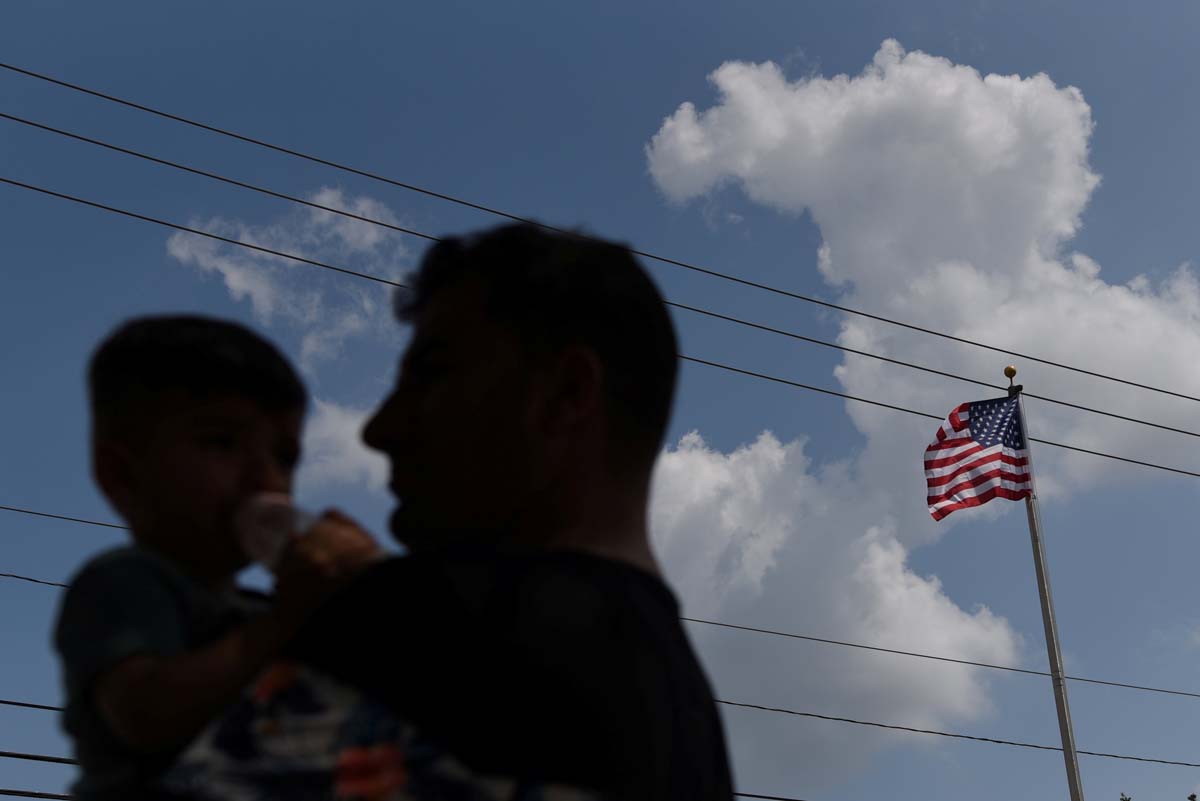 Abdul Aman Sediqi, an Afghan who holds a U.S. Special Immigrant Visa, holds his son in Houston Aug. 26, as his family prepares to sign a lease on a new apartment following their evacuation from Afghanistan. Catholic Charities of the Archdiocese of Galveston-Houston is working to support Afghan refugees who fled the war-torn country. (CNS photo)

HOUSTON — Afghan refugee Samira*, now a Refugee Resettlement case manager for Catholic Charities of the Archdiocese of Galveston-Houston, was 6 years old when the Taliban first came to her town in Afghanistan.

Her father was selling car parts in his shop when Taliban members grabbed him and beat him so badly that the family fled to Pakistan until Samira was 12.

“We returned to Afghanistan at that time because we thought we could have a normal life after living as refugees in Pakistan,” Samira said. “After I graduated from high school, I worked four years in information technology for a U.S. corporation that had a contract with the Defense Department.”

However, after a bomb blast near a U.S. Army base destroyed her company offices in 2013, she began receiving death threats, pushing her to apply for a special immigrant visa (SIV) to come to the United States.

Samira’s story reflects many of the experiences shared by refugees who receive assistance through Catholic Charities’ Refugee Resettlement program.

Refugee resettlement is a high priority for Catholic Charities.

“Welcoming the stranger is a core message of Scripture and central to Catholic Social Teaching,” said Cynthia N. Colbert, MSW, president and CEO of Catholic Charities of the Archdiocese of Galveston-Houston. “We want to show God’s love to refugees from around the world, including recently arrived Afghani families, by helping them make a smooth transition into our city and our country.”

In the coming months, Catholic Charities expects to receive hundreds of Afghans who have been evacuated or managed to otherwise flee from Afghanistan. These families all require assistance from privately funded efforts to fill gaps in government programs. Catholic Charities is currently taking donations from generous, welcoming friends through its website at catholiccharities.org.

Samira received her SIV in 2015 and came to the U.S. alone in 2016 at age 23. She followed a co-worker, living with them for a couple of weeks, then moving in with other friends for a while. Because women generally do not drive in Afghanistan, Samira first relied on Houston’s public transportation, but she pushed herself to quickly get a driver’s license so she could search for jobs.

After a few negative work situations, Samira applied for a job at Catholic Charities helping Afghan families because she knew both Dari, the Afghan language, and Farsi, the Iranian language. She also understood the challenges of adjusting to a new country, especially as a woman. Today, she works with arriving families from many nations.
Samira said she knew well the challenges facing Afghani families moving to the area.

“They don’t speak the language, the culture is different, most women have never learned to drive, and their professional credentials often mean nothing,” Samira said. “They leave everything behind and flee. New families are very grateful for resettlement agencies that help them get processed so they can work hard and rebuild their lives.”

A few months after arriving in the U.S., Samira reconnected with an Afghan man she had worked with in Kabul. They were engaged in 2018 and married in April 2021.

Though Samira, now 28, lives in safely with her husband in their Sugar Land home, she said she constantly worries about her family in Afghanistan.

“My father and mother, a brother, two sisters and my grandmother are still in Kabul,” Samira said. “They are in a bad situation, and I am desperate to help them. I encouraged my parents to travel to a neighboring country to get out, but escape routes are closed right now.”

Samira is especially concerned for her teenage brother, who faces an ongoing threat from Taliban forces, who are known to conscript young males into service. And her two sisters face suppression as females.

“Living as a woman under Taliban rule is like being a bird in a cage,” she said.

“You cannot return to the life you left; it is lost to us,” Samira said. “Here, we have new opportunities to make a good life. But for my family trapped in Afghanistan, I don’t know what will happen to them. I hope every day they will be fine, but I am so scared.”

Tens of thousands of Afghan families like Samira’s need help.

To help them build a new life in Houston after fleeing danger, please make a donation at catholiccharities.org/afghanistan. †

*Editor's note: Samira’s name has been changed to protect her and her family’s identity in Afghanistan.