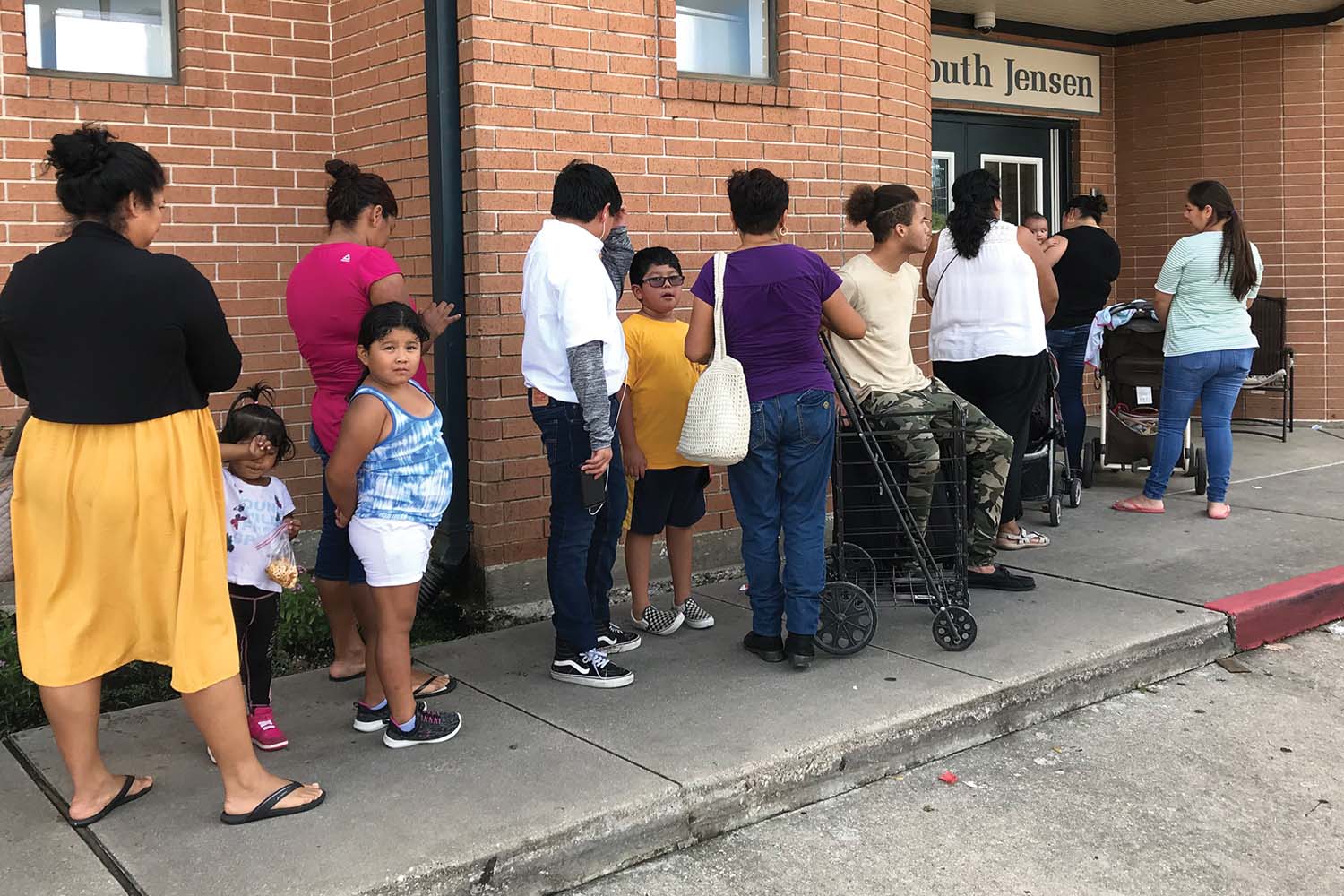 Even before the floodwater drained, Catholic Charities was putting a plan together to open food pantries at three locations in the area to serve families who experienced loss from Tropical Storm Imelda. Families lined up outside, waiting for help at the Pan de Vida Food Pantry at Guadalupe Center. (Photo courtesy of Catholic Charities of the Archdiocese of Galveston-Houston)

HOUSTON — When disaster strikes, such as the recent flooding in the Houston area from Tropical Storm Imelda, Catholic Charities leaps into action immediately to provide help through its human-service programs. These are essential to immediate relief from disasters and for the more persistent challenges that arise during recovery.
Catholic Charities is one of 60 ministries supported by the Diocesan Services Fund (DSF).

According to Cynthia N. Colbert, MSW, president and CEO of Catholic Charities of the Archdiocese of Galveston-Houston, its Disaster Recovery Program continues to assist clients impacted by Imelda and hundreds of clients still recovering from the flooding caused by Hurricane Harvey two years ago.

To date, about 10% of the calls the ministry received for help following Imelda came from households already impacted by Harvey.

“Currently, we don’t have funds designated for Imelda’s damage to homes; however, our social service programs can address other needs, such as food, clothing and emergency financial assistance for rent, utilities and medication,” said Colbert.

The worst flooding from Imelda occurred in the northeast part of the Houston area. While not as extensive as the damage caused by Harvey, it is no less significant to the individuals whose homes, vehicles or jobs were affected. The most common needs are to replace furniture and appliances lost in flooded homes, as well as various home repairs.

“Catholic Charities opened its food pantries immediately following Imelda since the low-income households affected by flooding are the least able to replace their groceries,” said Colbert. “Within a few weeks after Imelda, Catholic Charities worked with St. Martha Catholic Church in Kingwood to facilitate large-scale food distribution in the Kingwood, Porter and Humble areas to serve 700 families. In addition, our Disaster Recovery Program is providing information and referrals to people who have called our disaster hotline to connect them with the resources they need.”

Colbert shared the stories of two clients that were impacted by Imelda that were still recovering from the effects of Harvey. The families recently received assistance from a food pantry that opened after Imelda.

“Sandra” (name changed for privacy) lives with her mother, a senior with health issues, in a house near I-45 and West Montgomery. She experienced ankle-deep water in her home from Harvey, but knee-deep flooding from Imelda.

This second disaster struck at the worst possible time: Sandra had just brought her sister to the house the night before, after she was released from the hospital in fragile condition, still swathed in bandages with a newly inserted intravenous catheter for cancer treatment.

Sandra came to Catholic Charities’ Pan de Vida Food Pantry at the Guadalupe Center on Saturday after the flood, seeking assistance with food. Exhausted and teary-eyed, she said she had been up all night cleaning out her house. Sandra expressed her gratitude for the food, which she would take to a soggy home.

Another family impacted was Ana and her baby, Maria, who live in an apartment not far from NRG Stadium. The rains from Imelda were so fierce and torrential that the roof of their apartment was severely damaged. The rain poured in from overhead, damaging their possessions and ruining what food they had in their kitchen. Out in the parking lot, floodwater filled their car. Ana was grateful that she could come to Catholic Charities’ Pan de Vida Food Pantry so soon after Imelda passed to replenish their food supplies.

Colbert said people often think only of extreme occurrences such as these from the natural world.

Still, Catholic Charities also assists people with the daily disasters that occur every day on a human scale: a job loss that leads to hunger, an eviction notice that could mean homelessness, the loneliness that builds into desperation, etc.

Colbert gives thanks to parishioners who contribute to the DSF, which allows Catholic Charities to continue to provide the help that restores hope for thousands of families throughout the year.

She reminds us of Jesus’ words in Matthew 25:40, “…in so far as you did this to one of the least of these brothers of mine, you did it to me.”

“DSF connects parishioners with Archdiocesan efforts like those at Catholic Charities to help people in need, and we are grateful for the support we receive through the fund,” said Colbert. “While the gifts support our efforts in a practical way, it lifts our hearts to know that we have support from parishioners throughout the Archdiocese. We rely on our faith that God will provide the fuel we need to serve his children, knowing that generous donors to the DSF, inspired by their faith, will fill in any gaps in our resources.”