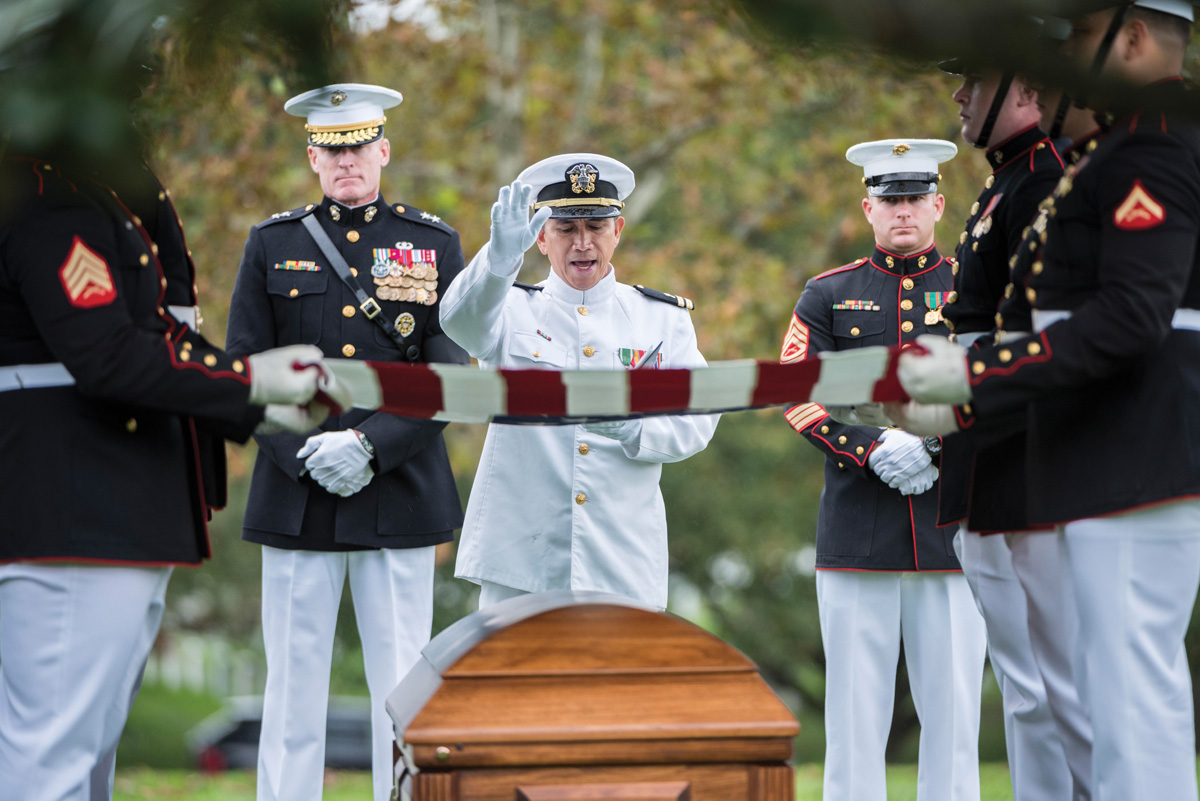 Father Eduardo B. Amora, a Navy chaplain who holds the rank of lieutenant commander, gives remarks Sept. 27, 2018, at Arlington National Cemetery during the group burial of four Marines and one sailor who died during the Vietnam War. Buried in Section 60 of the cemetery, their remains were identified decades after their deaths by the Defense POW/MIA Accounting Agency. Father Amora is a priest of the Diocese of Mati, Philippines, on assignment with the U.S. Archdiocese for the Military Services. (CNS photo)

ARLINGTON, Va. (CNS) — “No one has greater love than this, to lay down one’s life for one’s friends.”

These words, while not identical in language to the oath every military member swears on entering the service, are identical in substance.

And at Arlington National Cemetery, Catholic chaplains have a special mission to provide last rites for those who gave their lives for their country.

Though the cemetery is located in Arlington County, it is controlled by the U.S. Department of the Army, and its spiritual care falls under the jurisdiction of the U.S. Archdiocese for the Military Services.

However, many parish priests in Northern Virginia, with its sizable military population, have conducted funerals at the cemetery, as the families of fallen military members can request that their parish priest offer the funeral — with special permission from the military archdiocese.

Monsignor John C. Cregan, retired pastor of Blessed Sacrament Church in Alexandria, Virginia, said he has presided at several for military people from his parish.

The priest, who served as an officer in the U.S. Marine Corps for 22 years before he was ordained, said every time he conducts a military funeral, it is “very, very moving.”
“A lot of young military guys don’t consciously think of this, but when you raise your right hand in an oath, you’re placing your life on the line for other people,” Monsignor Cregan said. “It’s very important that we don’t forget the people that have made great sacrifices for the values we cherish ... as Catholic Americans.”

There are four priests currently assigned to Arlington National Cemetery — two from the U.S. Army, and one each from the U.S. Navy and the U.S. Air Force — who conduct the bulk of the Catholic funerals there. The Navy chaplain also covers funerals for the Marine Corps and the Coast Guard.

Father David Kirk, an Army chaplain who holds the rank of major, is the senior Catholic priest among them.

On any given day, an average of 25 to 30 funerals are performed at Arlington National Cemetery. In the year and a half Father Kirk has been assigned to the cemetery, he said he’s performed between 600 and 700 funerals, and as many as five in a day.

Funeral Masses are celebrated in the Old Post Chapel at the cemetery, though due to time constraints the rites are typically shortened, Father Kirk said. Afterward, the chaplain will walk with the family to the grave site.

“It’s a very important ministry for the families and for us also, as priests, to be there for the family in such a situation and occasion,” said Father Nelson Ogwuegbu, an Air Force chaplain who holds the rank of captain. “It’s very consoling (for them) to get here and find a priest who most of the time is wearing the same uniform that your loved one wore.”

Because of an extensive backlog and waitlist, families of fallen service members often have to wait at least a year to have their loved one buried at Arlington National Cemetery, Father Kirk told the Arlington Catholic Herald, the diocesan newspaper.

When he makes contact with the families to start arranging details for the funeral, he said he receives a wide variety of responses.

“Families have said your sense of being able to have closure and move on doesn’t happen as soon with Arlington,” Father Kirk said of the wait to get in at the cemetery.

“Then with those who have started making closure, it does open things back up again,” he explained. “But for a number of families, it opens things back up in a happy way — we’re now going to be able to bury our loved one and fulfill their wishes. For many people, you can almost sense on the phone that sense of relief to them that they’ve finally got to this point.”

While the ministry of an average parish priest might involve many different things, the Arlington National Cemetery priests spend the majority of their time consoling those who are grieving.

Father Kirk said military chaplains have a threefold call: “Nurture the living, care for the wounded, honor the dead.”

“At Arlington, we certainly honor the dead, but we also take care of the wounded — and wounded doesn’t always have to be physical wounds. They can be emotional and spiritual wounds,” Father Kirk said.

“We care for and nurture the living, which are the soldiers who we are with and the family members that come here for the funerals,” he said.

“It’s such a blessing to be able to be at Arlington because of how unique of a place this is,” he added. “It’s such a beautiful assignment.”