"Carry The Message of Hope": In spirit of V Encuentro, Hispanic laity, clergy help families in need amid pandemic 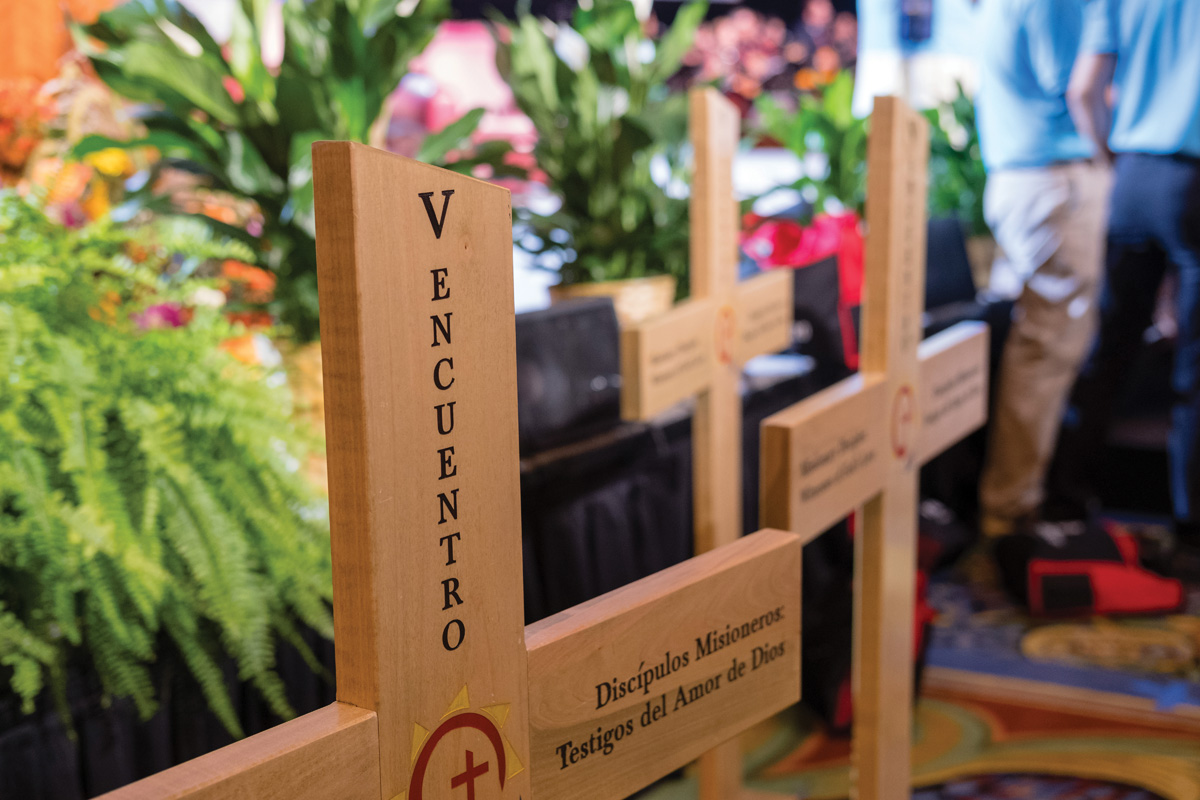 A group of crosses are seen at the Fifth Encuentro held near Dallas in 2017. Effects from this national event continue to be felt in Houston and beyond. Hispanic ministry leaders in Houston said they have been proactively finding ways to serve the needs of the community. Below, Lazaro Contreras, , director of the Office of Hispanic Ministry of Galveston-Houston, speaks during a panel at the Fifth Encuentro in 2017. (File photos by James Ramos/Herald)

HOUSTON (CNS) — Every week since March, an army of volunteers and Father Evelio Menjivar, pastor of St. Mary’s Catholic Church in the Washington suburb of Landover Hills, Maryland, gather in the parish’s parking lot to give away boxes of food to local families in need.

As the pandemic’s effects caused by COVID-19 started to surface, the parish began coordinating with local authorities and Catholic organizations to streamline resources and assist people.

Like St. Mary’s, other parishes around the country quickly and quietly began working to help their communities in need, living the spirit of the Fifth National Encuentro, or V Encuentro, which invites participants to reach out and accompany those on the margins and show them the love of Christ.

Father Menjivar, a delegate of the Archdiocese of Washington to the V Encuentro gathering two years ago, said the Encuentro spirit became alive as the need grew.

“We had to go out in the spirit of the Encuentro and Pope Francis, who tells us to go out to the peripheries as missionaries disciples; we had to go out and help people,” the priest told Catholic News Service (CNS).

Just as Father Menjivar and his parishioners leaped into action to assist those in need in his community, throughout the country, Hispanic ministry groups in parishes also adapted to new ways to help and reach out to those in need. 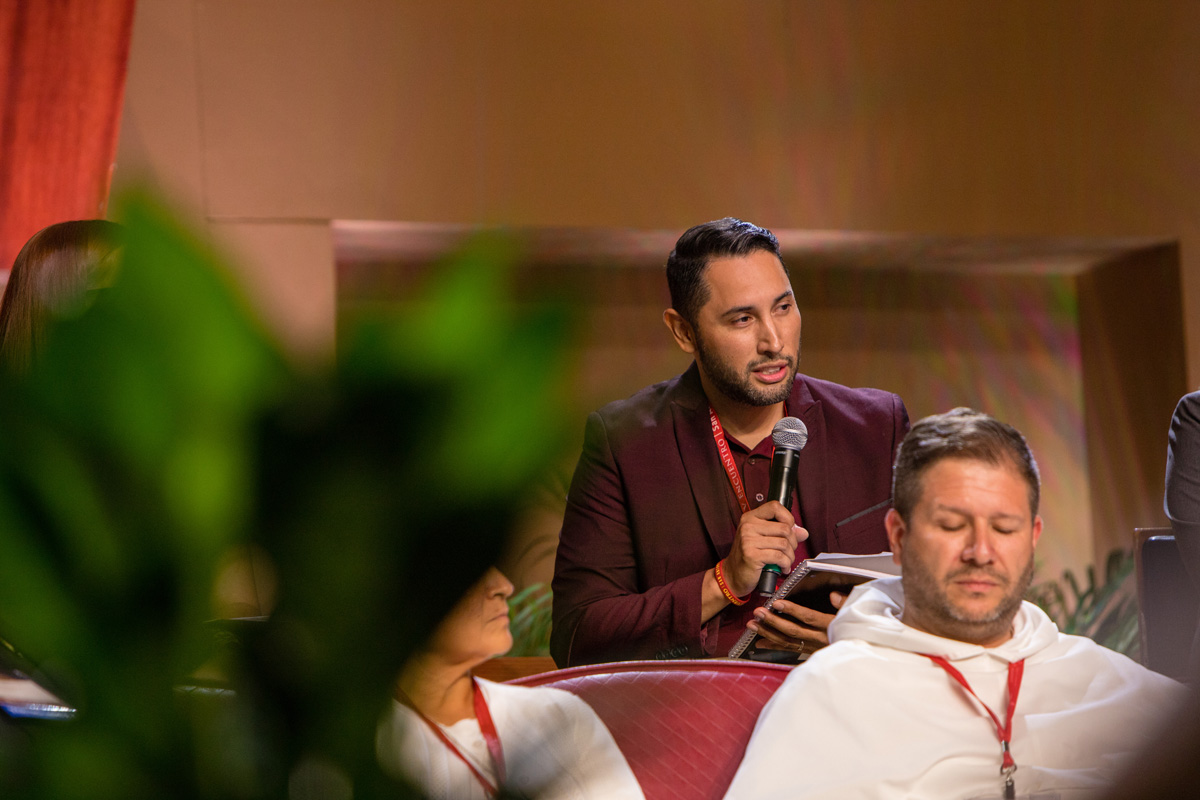 In Houston, the Office of Hispanic Ministry of the Archdiocese of Galveston-Houston also participated in the V Encuentro virtual meeting.

He said the pandemic stopped all face-to-face programs that were conducted to help the community from the office.

“However, in a proactive and totally creative way, we sought to respond to emerging needs created by the same pandemic through the technological resources at our disposal,” Vázquez said.

Lazaro Contreras, director of the Office of Hispanic Ministry of Galveston-Houston, said the office knows this time of change and isolation during the pandemic has been a tough time and it has affected everyone.

“We as individuals and families have been shocked by this pandemic but we also see the need to carry the message of hope that Jesus shows us in times of adversity and discouragement,” he said. “Many people have expressed sincere appreciation for what we, as an office, have been able to offer in these difficult times.”

Lía Salinas, director of the Office of Hispanic Ministry for the Diocese of Baltimore, said that as the calls for help multiplied, her office and the parish ministries it supports began acting as what Pope Francis calls a “field hospital.”

“Families were starving, families were going into financial hardship or had family members dying,” Salinas said. “We decided to shift our focus and become more into finding resources, connecting them to Catholic Charities resources, to food banks, to testing sites for COVID.”

Through her network of parishes, Salinas saw an outpouring of Encuentro participants reaching out to help Hispanics and non-Hispanics, whichever way they could, living the spirit of service that the V Encuentro promoted.

As an example, responding to the community’s needs, the parish Sacred Heart of Jesus/Sagrado Corazon de Jesus in East Baltimore, located in the heart of the Latino community in the city, became a testing site for COVID-19.

Across the country, in East Los Angeles, St. Marcellinus Catholic Church provided similar resources to its community in the early phases of the pandemic.

With the help of young adult volunteers, the parish quickly evolved into generating online evangelization resources, and it recently began using the V Encuentro model to guide its digital leaders.

“The Encuentro process has helped us to discern how we’re going to evangelize in this pandemic that we’re living, and it has given us the structure to do that,” said Johnny Martinez, also an Encuentro delegate and pastoral assistant at St. Marcellinus.

“The V Encuentro is a process that forces us to be constantly looking to bring others to Jesus. It’s a way of living that discipleship,” Martinez added.

In addition to their usual responsibilities running their parishes, accompanying people during difficult times has also been important for priests like Father Menjivar. The crisis has intensified the needs; more people call him seeking spiritual guidance, are sick and in need of Sacraments, or have lost a loved one.

On the day he was interviewed by CNS, the priest visited a family of five, all were sick with the coronavirus, and he brought them the Sacrament of the anointing of the sick.
“The Church is out serving others, this is the beauty of the body of Christ, that it can go out and touch the wounds of the people,” Father Menjivar said.

What keeps him going is prayer and the prayers of others. He invites people to reflect on the sorrows of Mary.

“We all, in a way, have been wounded, we share the same fears,” he added. “Knowing that Mary is with us and that we are called to offer also our suffering and our sorrows for the salvation of the world, that helps people a lot.”