Caring for the Earth a moral responsibility for Catholics, panelists say 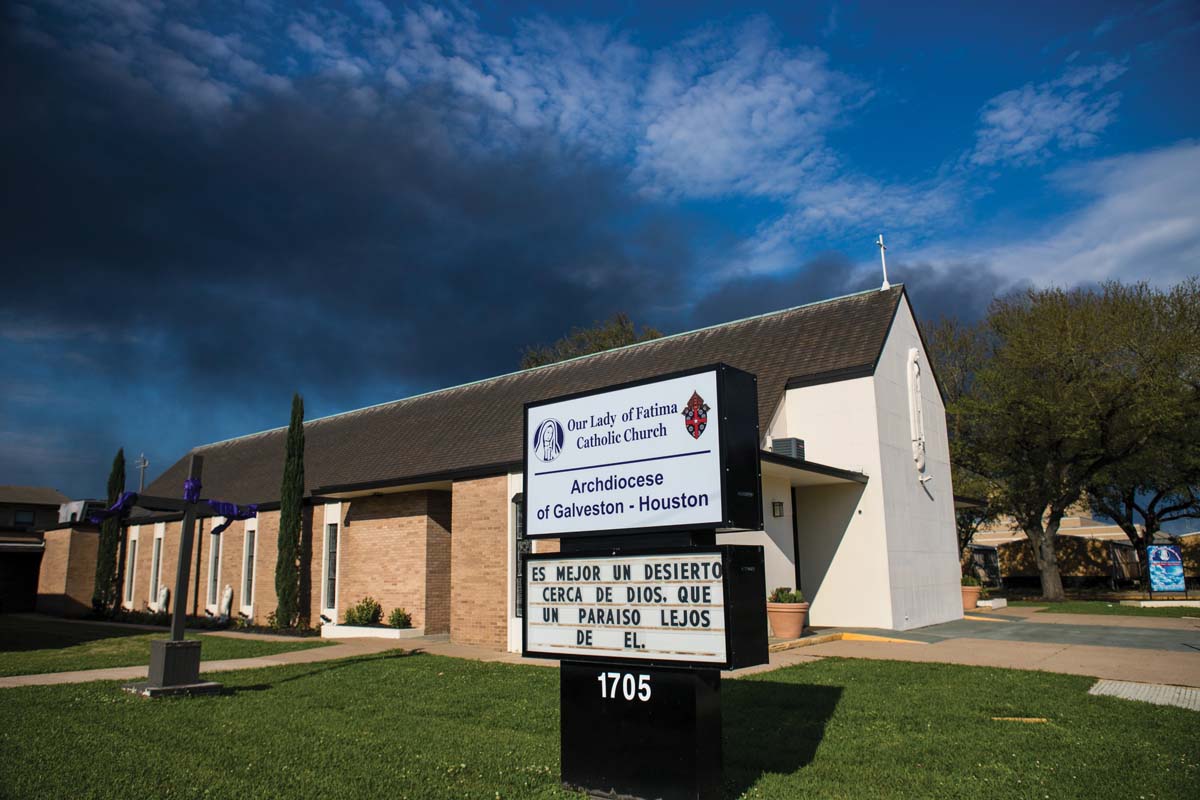 Dark plumes of smoke from the Intercontinental Terminals Company fire in Deer Park are seen above Our Lady of Fatima Catholic Church in Galena Park March 19. The massive fire erupted March 17, engulfing numerous storage tanks that continued to burn for four more days, with more flareups ensuing. The fire prompted several cities to shelter-in-place and community events and classes to be cancelled, including at St. Hyacinth Catholic Church in Deer Park and Our Lady of Fatima School in Galena Park. The cause of the fire is still under investigation. Photo by James Ramos/Herald.

HOUSTON — On March 16, the Sisters of Charity of the Incarnate Word (CCVI) held a symposium, “Called to Conversion: A Catholic Ecological Awakening.” More than 160 people gathered to listen to local Catholics who have taken on the role of leading efforts to educate others about the current global environmental crisis.

The symposium was in response to a meeting last year during which the sisters spent significant time praying, studying and discerning Pope Francis’ 2015 encyclical Laudato Si’ (“On Care of Our Common Home), which focuses on the calls to the Church and the world to acknowledge the urgency of today’s environmental challenges.

At the end of the meeting, the Congregation made a long-term commitment to what they refer to as “Care of Creation,” a commitment to educate themselves and others about the environmental crisis and to take concrete actions individually and communally to care for the Earth.

Sister Ricca Dimalibot, CCVI, a doctor and medical director for an indigent care clinic in Dickinson and the general councilor in charge of the Care of Creative initiative for the local congregation, welcomed attendees saying they were listening to God’s call to take care of the home He created for us, a subject that she said, has become “a fundamental moral and ethical issue.”

The morning started with presentations from three featured speakers, Michael Gormley, coordinator of evangelization at St. Anthony of Padua Catholic Church in The Woodlands and a consultant for parishes, dioceses and Catholic campus ministries; Roger Ingersoll, who spent more than 30 years working as an engineer in oil and gas projects worldwide, and is now involved in the Citizen’s Climate Lobby (CCL); and Matthew Tresaugue, a former Houston Chronicle reporter, who is now a manager for the Environmental Defense Fund where he leads efforts of a broad coalition of partners working on environmental issues in the Houston area.

Gormley said the Biblical Christian Worldview saw humanity as a part of nature, “But this image was abandoned with the idea of the universe as a machine that we could control, and this arrogance here has led us to the current ecological crisis.” He also emphasized Pope Francis’ concept of the ‘throw-away culture’ and St. John Paul II’s ‘culture of death,’ both, he said “Referred to the utilitarian attitude of the modern west, that if people aren’t useful, they are discarded.”

Ingersoll said that during his career he spent significant time working in the Arctic. He showed images from a 30-year NOAA study, which found that between 1987 and 2016, the Arctic lost 70 percent of its ice volume. He also shared the details of the damage global warming has done to coral reefs, which are among the most valuable ecosystems on Earth.

Ingersoll said coral reefs serve as vital protection for coastlines, habitat and nurseries grounds for marine life and provide jobs and income to local economies. He noted that 11 of the hottest years ever in recorded history have occurred since 2007.

Ingersoll ended his presentation referencing the current, bi-partisan Energy Innovation and Carbon Dividend Act (H.R. 763). After explaining the bill, he told attendees they can help by signing a form letter to be sent to their congressman. He also provided information from the Catholic Climate Covenant website and encouraged attendees to consider becoming a CCL volunteer.

Tresaugue was inspired to dedicate his work to the environmental movement after reading Laudato si’. He spoke on a personal level regarding environmental issues in the Houston area, including the mysterious ash covering neighborhoods, elevated benzyne and mercury levels in industrial areas (particularly near power-plants). He also discussed the sobering statistics of cancer, infant mortality, developmental disabilities and numerous other health issues challenging people in these neighborhoods.

The presentations were followed by a panel discussion led by Bill Clark, a retired engineer and founder of the Creation Care Ministry at Mary Queen Catholic Church in Friendswood. He said he became concerned about the environment and felt an urgency to educate and inspire others to get involved and change their daily habits in hopes to end environmental destruction.

Sister Dimalibot said Catholics have a moral obligation to care for the environment because God built the Earth for all people.

“There is no quick solution, but we have to assess our small, daily actions... ask ourselves should I use this water-bottle or should I use this plastic simply because it is convenient, or would I make the small sacrifice several times a day not to use these single-use items because those simple acts of love will eventually become bigger acts of love and will bring us closer to God,” she said.

Panelist Audrey Novak, a senior at the University of St. Thomas (UST) where she leads campus sustainability initiatives, said when she started attending UST she was struck by the amount of waste generated in the campus cafeteria. For the past three years, she has worked tirelessly to educate and impact the behaviors of students encouraging them to recycle and lower their use of single-use items, many of which are not recycled. She is now asking UST administration to step-in and mandate rules in an effort to reduce waste.

Deacon Sam Dunning, director of the Office of Justice and Peace for the Archdiocese, said has seen the destruction and pollution in Houston’s Ship Channel and other industrial areas. He encouraged attendees to get together with others in their community and fight to save their local environment saying, “If people get together locally, great things can be done... I witness this on a daily basis.”

Called to Conversion was the first public event held by the congregation. Future events include a trip to Houston City Hall to speak before the city council about environment and climate concerns, a tour of some of the worst pollution sites in Houston, an ecumenical prayer service in September for the World Day of Prayer for Care for Creation. And on the Villa De Matel campus, the sisters, staff and volunteers are seeking ways to reduce their waste and plastics footprint in an effort to ensure that a minimal amount of trash (no more than 10 percent) is sent to landfills.

The congregation also plans to be more involved in CCL and will attend their national conference later this year.