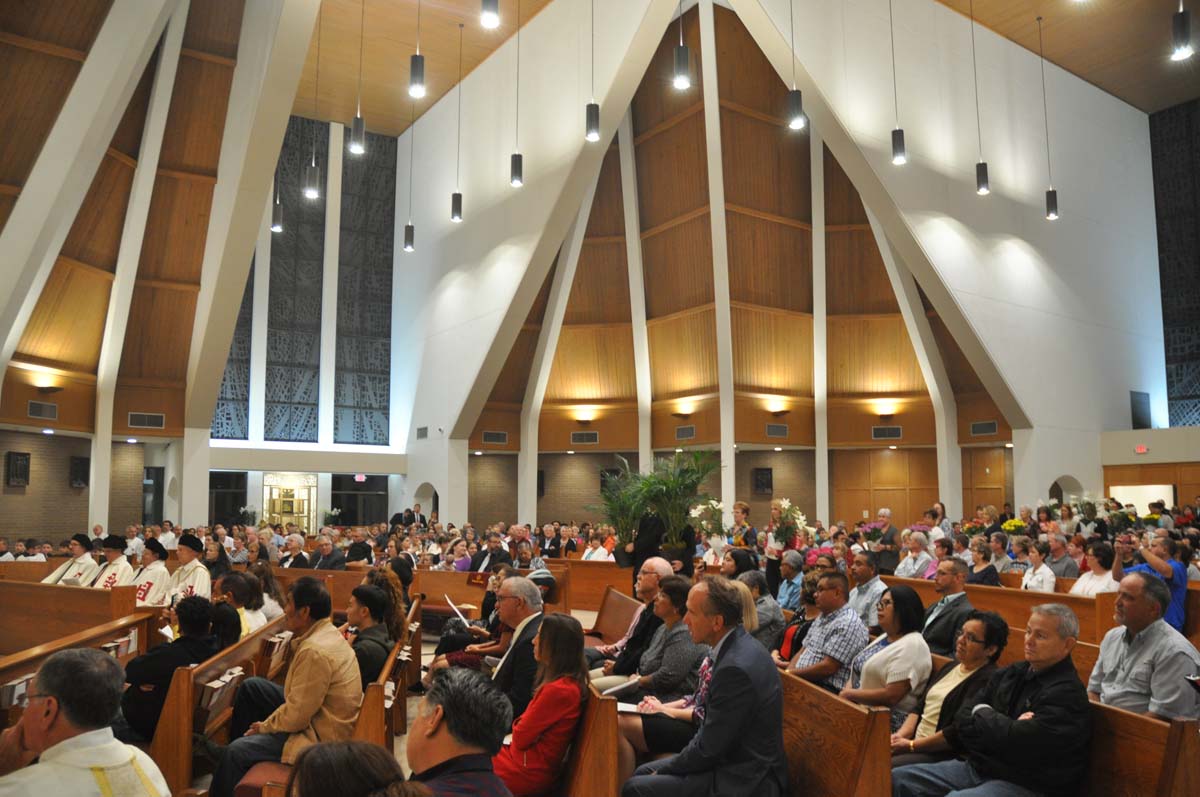 DICKINSON — Daniel Cardinal DiNardo, celebrating Mass April 5, rededicated the Shrine of the True Cross Catholic Church in Dickinson. The church building was filled with parishioners joyful over the renovated sanctuary after it was flooded by Hurricane Harvey last August.

While the church reopened for Masses by the Easter season, its Catholic school and hall remain under major repairs until the fall.

In his homily, Cardinal DiNardo said, “Brothers and Sisters, it’s been a very difficult time. So many homes flooded, this church flooded, schools flooded. So many lives displaced, so many relationships that became vulnerable, so much anxiety ... And yet, at the same time, (the region’s) resilience and helping of one another became a kind of imagery model for the rest of the United States.”

Father Larry Wilson, Shrine pastor, said “Having our church home to come and worship in this time brings a special Resurrection message.”

Catholic Charities President Cynthia Colbert said, “While the media and cameras have gone away from hurricane recovery, we still have pockets in surrounding areas in dire need.”

She recently visited an unincorporated area in north Houston where families remain living in trailers. Over the next three years, the $5 million grant from CCUSA will provide long-term Disaster Case Management and Recovery services to individuals impacted by Hurricane Harvey.

The grant will also have a special focus on serving smaller, outlying communities where recovery services have not been available by other providers. In particular, the small communities near where Harvey originally made landfall saw great need.

Karla Cisneros, Houston City Council member who attended the Disaster Recovery breakfast meeting for updates, said, “The work that Catholic Charities is doing is critically important. While we are still waiting for FEMA dollars to get here, you are helping those most in need.”

Matt Johns, Catholic Charities’ director of Disaster Recovery Services, said the agency has allocated $3 million so far to about 19,658 clients in 6,158 households impacted by the storm, mostly for emergency housing as well as relocation efforts, utility assistance, furniture and gift cards to help rebuild their lives.

In addition, the organization is still hiring case managers since their staff members currently have an average caseload of 35 families each with a waiting list for new clients.

“This has been an unprecedented disaster with Hurricane Harvey. And remember that we’ve had five disasters and floods over the past two years,” Johns said.

Collaborative preparation before the storms are needed, Johns agreed. First responders were overwhelmed with the aftermath of Hurricane Harvey, prompting the county judge and mayor to give the go-ahead for volunteers with boats and other efforts to rescue people from rising waters.

But long-term recovery is estimated to take three to five years, including counseling and spiritual care when needed, he said.

“After meeting the survivors’ basic needs of food, water, clothes and immediate shelter, people then had to deal with the process of mold remediation, muck, gutting homes, repair and rebuilding,” Johns said.

Then many lost their jobs as well as losing about a million vehicles in the flooding.

“It’s not until you go inside the homes of those flooded that you truly see the remaining damages. Some organizations say they are only helping for this first year. But we at Catholic Charities are in it for the long haul,” he said.

Johns served as 2017 chairman of the Texas Gulf Coast Regional VOAD (Voluntary Organizations Active in Disasters) where he led the nonprofit response to Hurricane Harvey.

He said, “Many of those impacted by the hurricane have not found their ‘new normal’ yet.”

Despite hoping against a repeat of such storms, the Global Weather Oscillations, which correctly predicted the hyperactive 2017 Atlantic hurricane season, is again predicting another possible record-breaker in 2018, albeit in different locations.