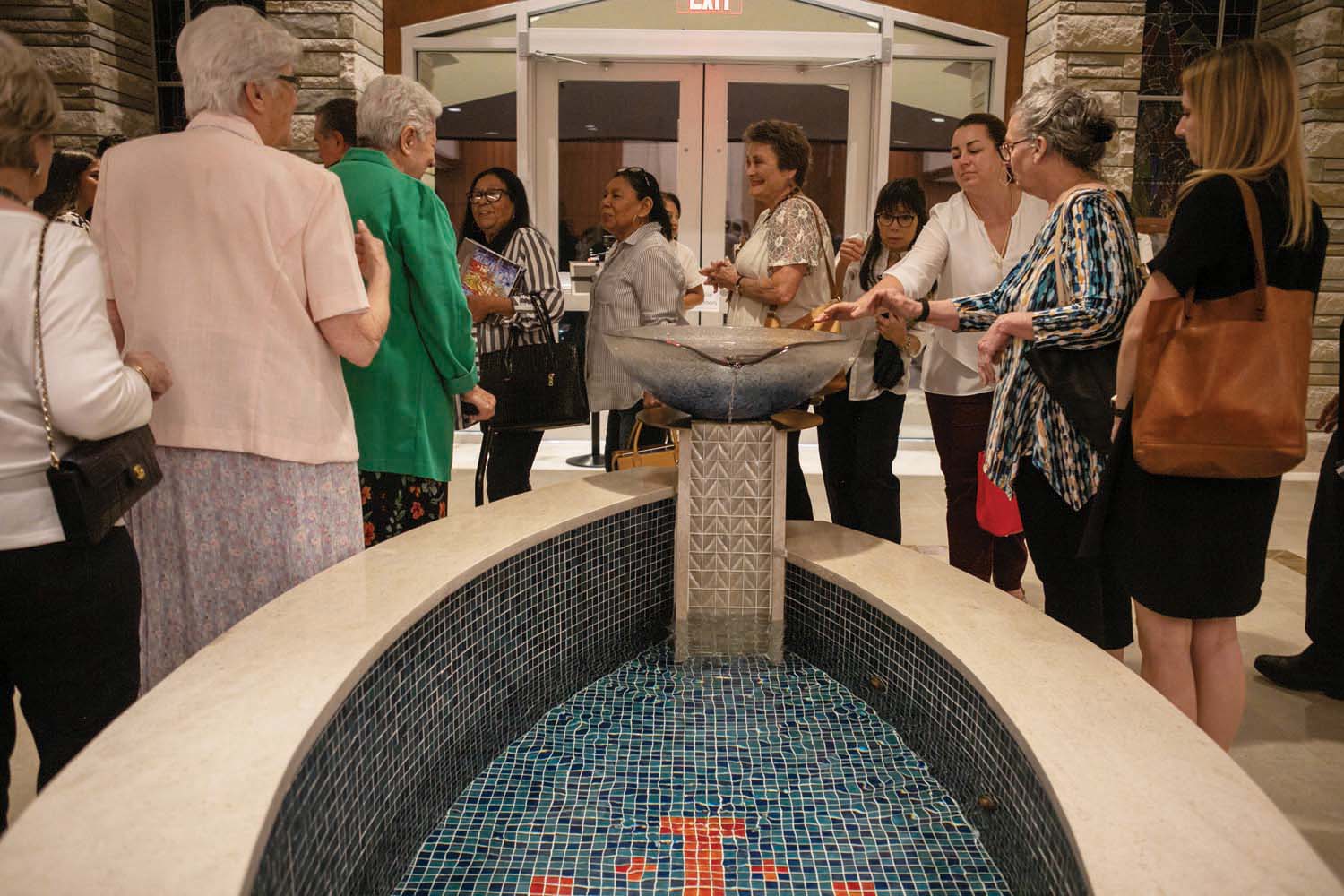 Parishioners greet one another after a Mass of Rededication celebrated by Daniel Cardinal DiNardo at St. Theresa Catholic Church in Houston on Aug. 14. (Photo by James Ramos/Herald)

HOUSTON — When all the lights turned on to illuminate a darkened St. Theresa Catholic Church sanctuary, parishioners gasped and applauded as they finally saw their new church in full view.

600 parishioners and community members turned out to attend an Aug. 14 Mass of Dedication celebrated by Daniel Cardinal DiNardo in the newly renovated church of St. Theresa Catholic Church in Memorial Park.

In his homily, Cardinal DiNardo reminded the congregation that they were “living stones” baptized, confirmed and given the Eucharist to bring about God’s reign on earth.

St. Theresa’s new church features much of the original marble from the 1959 edifice, according to parish officials.
During the Mass, a reliquary containing relics of many saints, including St. Theresa of Liseux, St. Catherine of Siena, St. Francis of Assisi, St. Clara and St. Desiderus, were placed in the altar.

A new cross, with a carving of the crucified Christ and paintings of St. Mary Magdalene and the Beloved Disciple, now hangs above the Blessed Sacrament in the Tabernacle, now repositioned in the center of the church. The parish’s processional was fashioned similarly to the sanctuary cross.

Towards the back of the church, a new baptismal font, with a striking red-tile Jerusalem cross, features an elevated flowing fountain for holy water. Near the font, a tapestry of Our Lady of Guadalupe offers a private moment for votive prayer.

On one side of the altar is an icon of The Virgin Mary, Mother of the Church. Near this icon is a gold-colored carving On the opposite side, a triptych icon features images of Christ appear in radiant glory to Peter, James and John during the Transfiguration.

Gone were the dark green carpets, now replaced with light-colored tile, and the dark wood wall covers now revealed a new bright focus on the carved Stations of the Cross. The Paschal Lamb mosaic that previously hung on the wall above the altar is now featured in the new lobby of the narthex.

The ambo was designed with a motorized height adjustment to accommodate children and persons with disabilities, parish officials said.

The new church was the result of a master plan that began in 2006, with the related capital campaign starting in 2012. For two years, Masses were celebrated in the parish gym, until the new church was dedicated Aug. 14. A new school building was also dedicated a week earlier.

Named after St. Theresa of Lisieux, founded in 1946, the parish at St. Theresa is home to more than 2,700 households.