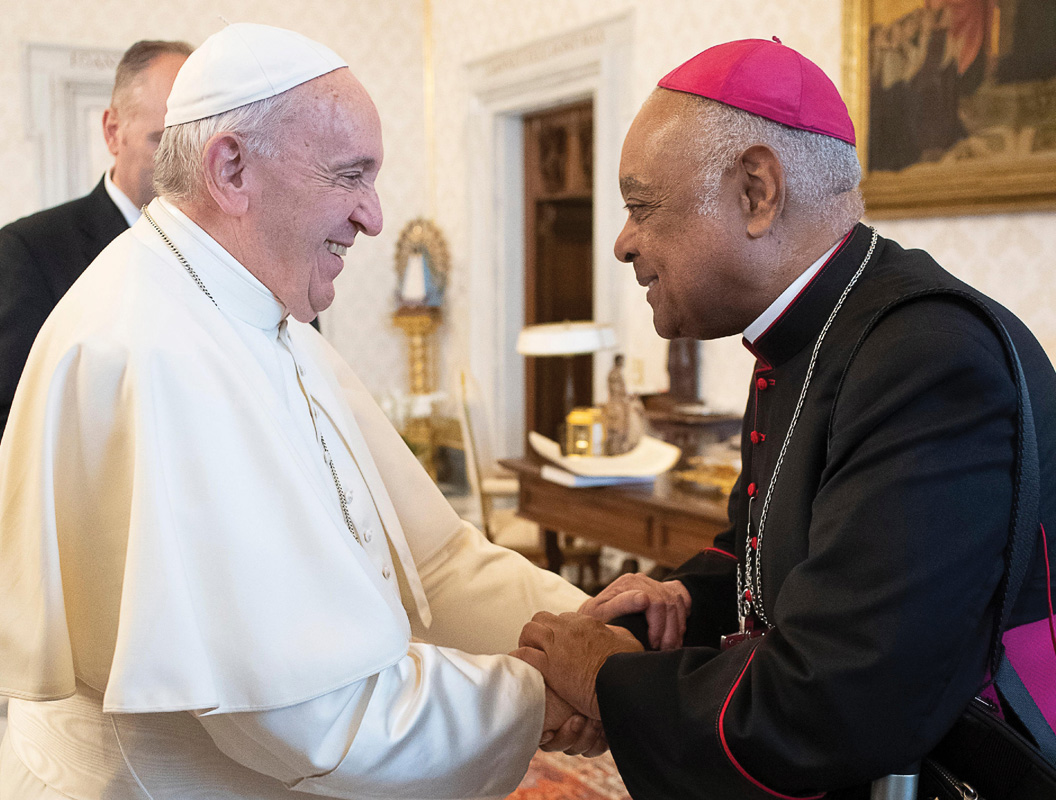 Archbishop Wilton D. Gregory of Washington was one of 13 new cardinals named by Pope Francis Oct. 25. Archbishop Gregory is pictured meeting the pope during a meeting with U.S. bishops making their “ad limina” visits to the Vatican in this Dec. 3, 2019, file photo. (CNS photo)

The news of the country’s first African-American prelate to be elevated to the rank of cardinal on Nov. 28 sparked joy, as well as commentary that it was something that should have happened long ago.

“I am delighted that Pope Francis has named Archbishop Wilton Gregory of Washington to the College of Cardinals,” said Daniel Cardinal DiNardo in an Oct. 25 statement. “Archbishop Gregory has given his life to the Church as a holy priest and bishop.”

Cardinal DiNardo said that Archbishop Gregory, having served as president of the U.S. Conference of Catholic Bishops, has shown leadership among the bishops of the United States.

“I pray for God’s blessings upon the Church in Washington, D.C., as Archbishop Gregory soon becomes a close collaborator with Pope Francis in the College of Cardinals,” Cardinal DiNardo said.

“In elementary school, he asked his parents if he could become Catholic. Priests and sisters in a Catholic school had inspired his heart. Today... look what the LORD has done...,” tweeted Bishop David P. Talley of Memphis, Tennessee, Oct. 25, the day the announcement was made public.

The Archdiocese of Chicago, where the cardinal-designate chose to become Catholic as boy after attending a parochial school (even though neither of his parents was Catholic), said it was rejoicing over the announcement and touted the cardinal-designate’s experience and contributions during difficult times for the Church.

“Cardinal Gregory, who came to the Catholic faith as a student in an archdiocese grammar school, went on to become a strong leader in addressing some of the most pressing issues facing the Church and society,” the archdiocese said in an Oct. 25 news release.

“In his years as president of the U.S. Conference of Bishops and beyond, he has been at the forefront of moving the Church to repair the damage of child sexual abuse and confronting racism in all its forms,” the release said.

Blase Cardinal Cupich of Chicago pointed out the meaning of the appointment, given that it comes as the U.S. faces increasing social strife.

“While we take particular pride in this recognition of a dedicated priest, whom we are proud to claim as our own, we are also moved that Pope Francis chose this compassionate, thoughtful pastor when our nation and the world are in desperate need of healing and courageous leadership,” he said.

On a more personal note, the General Council of the Adrian Dominican Sisters recalled that the cardinal-designate “credited Adrian Dominican teachers at St. Carthage Grammar School in Chicago with inspiring him to convert to Catholicism.”

“Archbishop Gregory, soon to be Cardinal Gregory, has long inspired us — and continues evermore,” the council said in a statement. “Archbishop Gregory’s appointment is a blessing beyond measure for the entire Church. As the first African American to be elevated to the College of Cardinals, Archbishop Gregory will bring the unique gifts and perspectives of Black Americans and Black Catholicism to the global Church’s highest ecclesiastical body.

“As a prelate deeply committed to social and racial justice,” it added, “Archbishop Gregory will bring his courageous voice of integrity to the pope’s inner circle, speaking words of compassion and inclusivity.”

“He has named the first African American cardinal in the U.S. in the midst of our nation’s reckoning with systemic racism, as millions assert that Black Lives Matter,” the organization said in a statement.

Jenny Kraska, executive director of the Maryland Catholic Conference, said in a news release that he is “a pastor at heart” and “his wisdom, kindness and faith” will serve him well “as he takes on this new responsibility as a special adviser to the Holy Father and a papal elector.”

“As our state and nation continue to grapple with racial tension, the appointment of the first African American cardinal in history also has special significance,” Kraska said, adding that “throughout his ministry,” Cardinal-designate Gregory “has sought to address wrongs and bridge differences.”

On Twitter, Shannen Dee Williams, assistant professor of history at Villanova University who specializes in African American, women’s, religious and civil rights history, said that “the road to this appointment has been long” while the costs in the U.S. Black Catholic community had been tremendous.

“While global #BlackCatholics still remain grossly underrepresented in the College of Cardinals, this moment MATTERS,” she tweeted.

In the Archdiocese of Atlanta, then-Archbishop Gregory’s successor as head of the archdiocese, Archbishop Gregory J. Hartmayer, said, “Being chosen as the first African-American cardinal from the United States indicates the pope’s awareness of the needs and gifts of the multicultural Catholic population throughout the United States.
“As his successor in the Archdiocese of Atlanta, I am particularly grateful for his leadership, mentoring and fraternity.”

Among his accomplishments, he said, the cardinal-designate is known for working closely with fellow bishops, clergy and women religious, promoting Catholic education, and fostering good relations with leaders of all faiths.

“It is clear that the talents and accomplishments of Archbishop Gregory will be a part of his legacy as a leader not only in the United States but also as a member of the College of Cardinals who attend to significant issues of dioceses throughout the world,” Archbishop Hartmayer added.

Father Bruce Wilkinson, a retired priest from Atlanta, tweeted that while he was celebrating the moment, the Church had to take a long hard look because after Cardinal-designate Gregory, “there will be none (no Black prelates) to follow.”

“Did it have to take this appointment to send a message by Pope Francis to be a diverse and an inclusive Church in America?” he asked on Twitter Oct. 25. “I’m not trying to rain on the parade, too much, but this is ... one man in one position.”