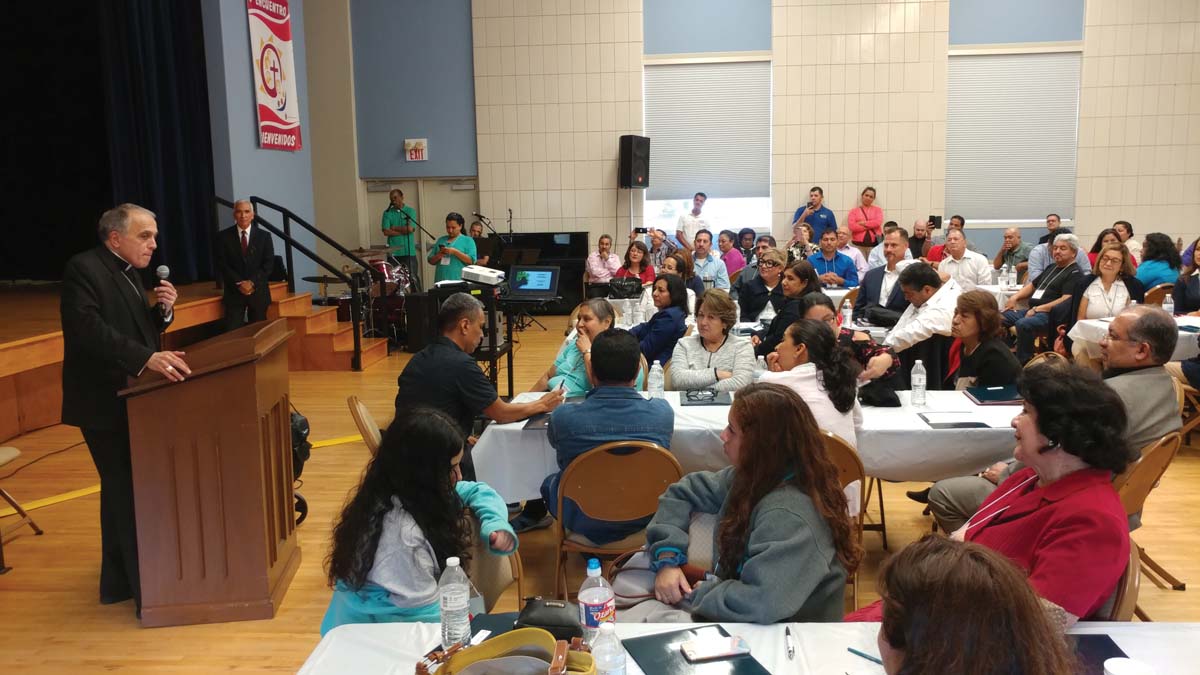 Daniel Cardinal DiNardo encourages Hispanics to travel their faith journey as did Jesus and His disciples at the V Encuentro Sept. 16. Photo By Norma Vasquez.

Meeting Sept. 16 at the St. Dominic Chancery’s auditorium, the delegates were elected by their parishes from as far as St. John Fisher Catholic Church in Richmond to brainstorm about what they need from the Church and what they can give to the Church and community.

Cardinal DiNardo said, “The main reasons for Encuentro (Encounter) are Jesus and becoming joyful missionary disciples as Pope Francis wants us to be.”

Disciples must journey to encounter those in need of evangelization, he said. Cardinal DiNardo listed several journeys in the New Testament starting with the Virgin Mary traveling to her cousin Elizabeth and then again to Bethlehem to deliver the baby Jesus.
Focusing on the Gospel of Luke in Chapter 9 beginning with The Journey to Jerusalem, the travel narrative, he said there were at least six dinners where Jesus broke bread and reached out to communities. Even through the Passover dinner and the Passion, Jesus resurrected and returned to walk with disciples on the Road to Emmaus.

“We need to listen and to speak from our hearts. The Pope wants us to be joyful disciples, not gloomy Christians,” Cardinal DiNardo said.

Interim Hispanic Ministry Director Joe Castro of the Archdiocese of Galveston-Houston said, “We talk about this being a historical moment when Hispanic Catholics are one of the largest groups demographically speaking. It goes beyond having Mass in Spanish because our young people, speaking both English and Spanish, have a lot to give to communities.”

Pope Francis explained, in a letter supporting the initiative by the United States Conference of Catholic Bishops (USCCB), “The main goal of the V Encuentro is to discern ways in which the Church in the United States can better respond to the Hispanic/Latino presence, and to strengthen the ways in which Hispanic/Latinos respond to the call of the New Evangelization as missionary disciples serving the entire Church.”

Castro said, “About 30 parishes have selected 10 or more delegates each so we expected about 350 people. We lost a few from those who were helping their parishes and homes from the flooding.”

From those, 108 delegates discerned and signed up to attend the regional meeting in San Antonio in April. The National Encuentro in 2018 is set for the Dallas-Fort Worth area, he said.

The Fifth Encuentro theme was “Missionary Disciples: Witnesses of God’s Love.” Among the objectives was “to promote a vision of the Church in mission that develops effective pathways to invite, engage and form Hispanic Catholic youths, young adults, families and lay ecclesial movements to live out their baptismal vocation. This included the promotion of vocation to the priesthood and consecrated life.”

Rhonda Sepulveda, representing Catholic Charities, said, “I found the V Encuentro to be an enriching experience that focused on our ecclesiastical responsibility to evangelize not just to those in our own circles, but also to those in the peripheries.”

For more information, the website vencuentro.org contains parish and other resources.