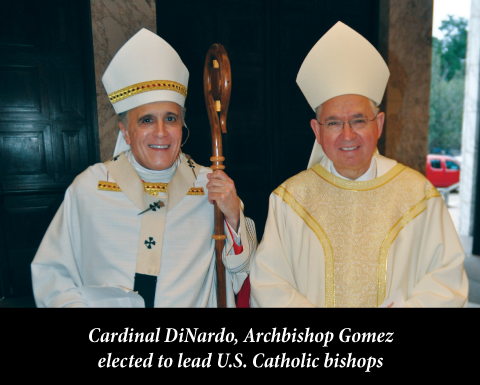 Daniel Cardinal DiNardo is pictured with Archbishop José Gomez of Los Angeles just prior to the annual Red Mass at the Co-Cathedral of the Sacred Heart, Nov. 2. Archbishop Gomez was the keynote speaker at a dinner following Mass. Photo by Jonah Dycus/Herald.

During a press conference following the election, Cardinal DiNardo said he hopes for the bishops to work “as shepherds and leaders to bring Catholics together, to recognize the beauty of the human person.”

“Pope Francis has called the entire Church to extend mercy as we have received mercy,” Cardinal DiNardo said. “To do that is a work of discipline … the discipline of faith, the discipline of voice. It’s a way to listen to one another without losing the most basic principles of the human person … I think this is where the priorities and plans for the bishops are leading into the next three years. My hope is that we will listen to one another and proclaim the basic faith of our Church very well.”

Cardinal DiNardo likened to Church of Galveston-Houston to the United Nations thanks to its multi-cultural make-up, adding that the people of the Archdiocese “love their Catholic faith.”

“They are dedicated to what is going to happen with the religious formation of their children, what is happening in terms of the sacramental life and how they can reach out to the poor,” he said. “I’m very hopeful about the Church in the United States and take great pride in what I see as Catholics witnessing to their faith.”

The bishops also chose the chairmen-elect of five committees and new members of the board of Catholic Relief Services, (CRS). The bishops elected are:

• Bishop Robert P. Deeley of Portland, Maine, chairman-elect of the Committee on Canonical Affairs and Church Governance in a 111-89 vote over Bishop David M. Malloy of Rockford, Illinois.

• Bishop Joseph C. Bambera of Scranton, Pennsylvania, chairman-elect of the Committee on Ecumenical and Interreligious Affairs in a 115-90 vote over Bishop Michael C. Barber of Oakland, California.

• Bishop Robert E. Barron, auxiliary bishop of Los Angeles, chairman-elect of the Committee on Evangelization and Catechesis in a 122-90 vote over Bishop Frank J. Caggiano of Bridgeport, Connecticut.

• Archbishop Timothy P. Broglio of the U.S. Archdiocese for Military Services, chairman-elect of the Committee on International Justice and Peace in a 127-88 vote over Bishop Robert W. McElroy of San Diego.

• Bishop Timothy L. Doherty of Lafayette, Indiana, chairman-elect of the Committee on Protection of Children and Young People in a 128-86 vote over Bishop Joseph J. Tyson of Yakima, Washington.

• Each bishop elected will serve for one year as secretary-elect or chairman-elect before beginning a three-year term.