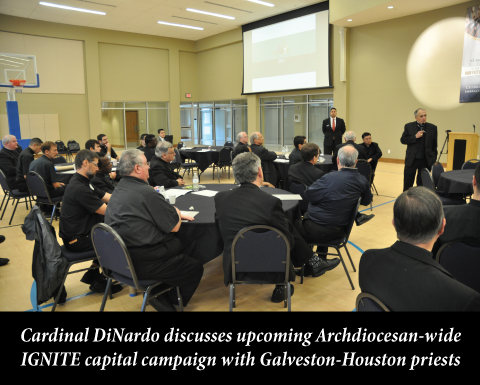 Daniel Cardinal DiNardo discusses the IGNITE capital campaign with priests from the Archdiocese during an information meeting at St. Mary’s Seminary, Nov. 28. Follow the Texas Catholic Herald for updates when the IGNITE campaign officially begins in 2017. Photo by Jonah Dycus/Herald.

HOUSTON — Priests representing parishes from around the Galveston-Houston area attended informational meetings to discuss the upcoming Archdiocesan IGNITE campaign, set to kick off in the New Year.

Over 120 pastors, parochial vicars and priests attended one of the two assemblies held on November 28th or December 19th at St. Mary's Seminary, one of the key beneficiaries of the $150 million IGNITE: Our Faith, Our Mission campaign."

Daniel Cardinal DiNardo and representatives from Guidance In Giving, Inc., the firm retained as fundraising counsel to the Archdiocese, met with clergy to explain the campaign details, help pastors understand their part in the campaign and outline how the firm will partner with them to build a unique campaign plan for each parish.

"I have the utmost confidence in the campaign plan and in the directors that will be working with you," Daniel Cardinal DiNardo informed the priests during the Nov. 28 assembly. "By combining your knowledge of the parish with their knowledge of effective fundraising, I know IGNITE will have an enormous impact on the future of our faith."

Besides aiding the seminary, IGNITE will provide funds for tuition assistance benefiting Archdiocesan Catholic elementary schools, teacher professional development, and faith formation programs. One third of the monies raised or $50 million will be returned to parishes to help meet local needs as determined by parish leadership.

Funds earmarked for St. Mary's Seminary will be used to improve infrastructure (mechanical, electrical and plumbing) of the aging campus, construct a new dormitory and renovate two existing dorms.

With faith formation, an endowment will be created for leadership formation and to assist poor parishes with shared catechetical leaders.
The active phase of the campaign will be conducted from January 2017 through December 2018. Every parish throughout the Archdiocese is asked to participate in the campaign in one of the four blocks. (See sidebar for block timelines). Campaign preparation has been in the works this past year. Cardinal DiNardo created a Priest Advisory Council to offer advice and counsel on campaign policies and procedures.

Follow the Texas Catholic Herald for updates when the IGNITE campaign officially begins in 2017.