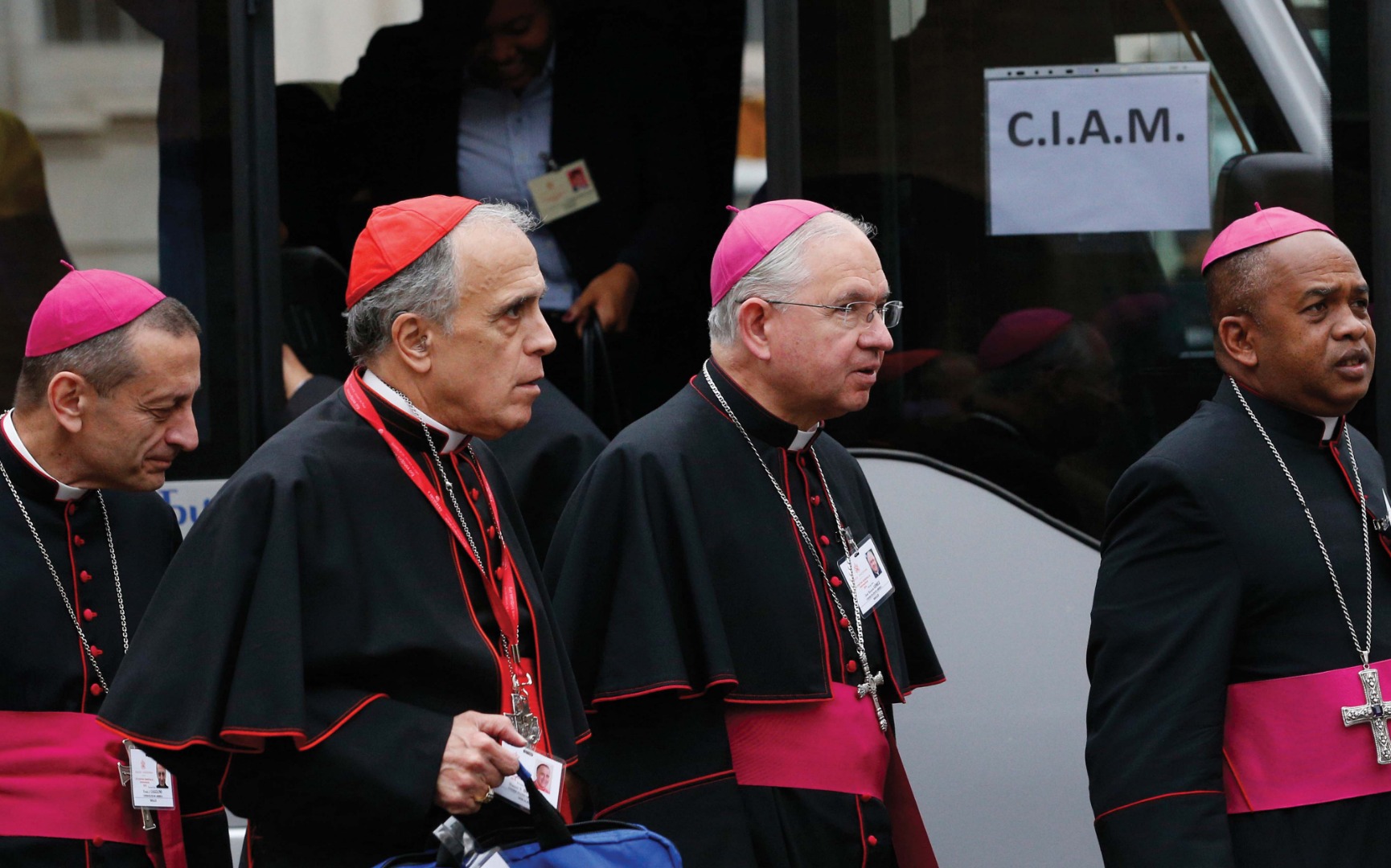 Daniel Cardinal DiNardo of Galveston-Houston, president of the U.S. Conference of Catholic Bishops, (second from left), and Archbishop Jose H. Gomez of Los Angeles, vice president of the conference (third from left), arrive for a session of the Synod of Bishops on young people, the faith and vocational discernment at the Vatican Oct 5. CNS photo/Paul Haring.

Read the entirety of Cardinal DiNardo's address at the end of the article.

VATICAN CITY (CNS) — Daniel Cardinal DiNardo used his episcopal motto — “Hail O cross, our only hope” — as the title of his speech to the Synod of Bishops on young people, the faith and vocational discernment.

“The central event for our faith and life is recognizing, interpreting and choosing the invitation to embrace the cross,” he told his fellow bishops Oct. 16.

As the Catholic Church and its members strengthen their commitment to reaching out to young people, helping them “by dialogue to discern their way in the world and the Church for a deeper, more human life,” they cannot ignore the cross, the cardinal said.

“Jesus asks everyone he meets to ‘Follow me,’” he said. “His invitation is strong, not weak; decisive, not anemic.”

As members of the synod discussed the assembly’s working document, making suggestions for how sections should be amended or altered for the gathering’s final document, Cardinal DiNardo said the cross and the meaning of Christ crucified were the key missing pieces.

Promoting youth ministry focused on encouraging a “growth process, a gradual maturing in faith,” has advantages, he said, but it can lead to a situation where “major spiritual themes might be diminished.”

Cardinal DiNardo noted how throughout the Gospels Jesus gradually reveals himself “as he beckons the Twelve, the crowds and us to the cross, to a crucified Messiah.”

“Jesus evangelizes through his identity as the crucified Lord,” Cardinal DiNardo said. “It is impossible not to see this throughout the Gospels.”

Cardinal DiNardo told synod members they should not hesitate to present the truth of faith to young people because they “are not fearful. They are willing for a sustained challenge to claim their identity.”

A “vague” call will not attract anyone, the cardinal said. The synod’s final document must “issue a call like Jesus’ call. It must witness to the cross.”

Cardinal DiNardo moderates the English-D group, one of 14 working groups at the Synod. Bishop Barron joins the cardinal in the group.

In their second round of reports to the Synod of Bishops, a number of working groups called for qualified and, in some way, supervised spiritual mentors or directors, recommended including more female figures from the Bible as examples and role models for young people, and praised having the inspiring input of young people during the gathering.

The second week of discussions centered on discernment, vocations and accompaniment, and the 14 working groups, which are divided by language, each came up with a number of suggestions, critiques and recommendations for the synod’s final document. The Vatican released the reports Oct. 16.

The importance of formation for mentors and spiritual directors also received much discussion in the English-D group, which included bishops from Canada and the United States, such as Cardinal DiNardo and Bishop Barron.

Even though one member of the group insisted “any baptized person can be an effective even powerful role model in the Christian life,” the group as a whole felt “the art of authentic spiritual mentorship requires specific training” and expertise.

Some in the group “warned that spiritual teachers too frequently devolve into gurus and encourage a cult of personality around themselves,” so “unmentored mentors” are not wanted or needed in the Church.

The group noted “with a certain sadness that many prospective mentors today, especially in the West, are reluctant to enter into a relationship with a directee for fear that they might be accused of boundary violations.”

Group members also praised the use of biblical figures and their lives to help inspire young people, however, several young women in the group recommended the inclusion of more women “who cooperated mightily with the Lord,” such as Mary, Ruth, Deborah, Hannah, Abigail and Tabitha.

The working group English-A, which includes bishops from the United States, Australia, Ireland and England, said the synod “came alive” when young people gave their interventions, with one bishop in the group commenting, “I never realized a synod could be so much fun!”

Another group emphasized the need for “trained mentors” who had proper formation as well as “accompaniment/supervision” themselves so they could be effective spiritual guides.

“Hail O Cross, our Only Hope”

By Daniel Cardinal DiNardo, Archbishop of Galveston-Houston, to the “Synod of Bishops on Young People, the Faith and Vocational Discernment”

The Instrumentum Laboris for the XV Ordinary General Assembly of the Synod of Bishops (IL) thematizes “Young People, the Faith and Vocational Discernment.” The document is frequently descriptive and relates the current experiences of the young and “their generational specificities” that are not always being met by the Church.

The IL asks the Church to accompany the young and to help them by dialogue to discern their way in the world and the Church for a deeper, more human life. It employs three steps, recognizing, interpreting and choosing as the method to evaluate what we do and say.

There are advantages to this method of a growth process, a gradual maturing in faith, but there are also disadvantages in so far as major spiritual themes might be diminished.

A central lacuna in the IL is a relative absence about the Cross and the meaning of Christ crucified. The Cross thus becomes muted. In numbers 172-173 the IL speaks of the reality of accompaniment and proclamation. These highlight the indelible image of the Creator present in all the young. Those in pastoral service are to help young people to see life as a gift and to overcome the throwaway culture. They accompany the young in learning and proclaiming the Good News of Easter joy, the basic kerygma.

Yet, the central event for our faith and life is recognizing, interpreting and choosing the invitation to embrace the Cross. Jesus asks everyone He meets to “Follow me.”

His invitation is strong, not weak; decisive, not anemic. If we examine, for example, the Gospel of Saint Mark, Jesus is already on mission from His Baptism and first call of the Apostles.

In the dramas of the raising of the daughter of Jarius (Mk 5:21-43), and the healing of the woman with the hemorrhage (Mk 5:25-34), in the healing of the blind Bartimaeus (Mk 10:46-52), in each chapter, the identity of Jesus partially hidden, is more and more revealed as He beckons the Twelve, and the crowds, and us, to the Cross, to a crucified Messiah. Even His words about being a humble servant are stated in action by placing a child in front of the Twelve (Mk 9:30-36), after He has repeated the prediction of His Passion. Jesus evangelizes through His identity as the Crucified Lord. It is impossible not to see this throughout the Gospels.

Young people today are not fearful. They are willing for a sustained challenge to claim their identity. There cannot be a proclamation that is too diffuse and too vague. The final section of the IL needs to be modified and to issue a call like Jesus’ call. It must witness to the Cross.