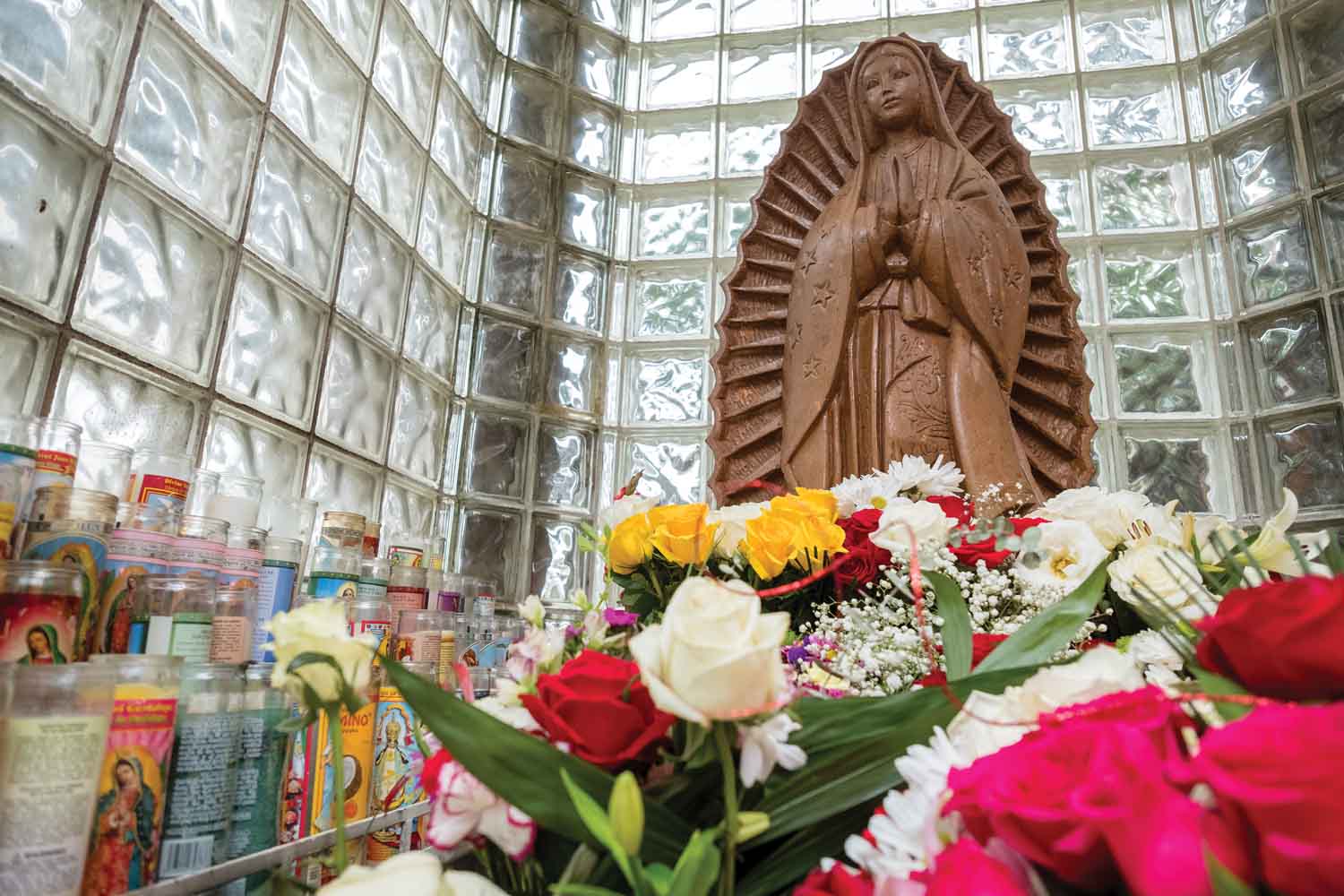 Flowers and votive candles surround a terracotta statue of Our Lady of Guadalupe at St. Jerome Catholic Church. On May 1, Daniel Cardinal DiNardo and Auxiliary Bishop George A. Sheltz consecrated the Archdiocese and the nation to Mary. (Photo by James Ramos/Herald)

HOUSTON — Daniel Cardinal DiNardo, with Auxiliary Bishop George A. Sheltz, joined other bishops throughout the United States and reconsecrated the country to Mary as the nation continues to struggle during the coronavirus pandemic.

Cardinal DiNardo led a “Renewal of the Consecration of the United States of America to the Blessed Virgin Mary” in a special May 1 Liturgy, which was livestreamed on the Archdiocesan website and social media. The Liturgy was held in English and Spanish at 2 p.m., at the same time as other diocesan bishops in the U.S. and Canada. Bishops in Canada also used May 1 to rededicate their country to the Blessed Mother.

Cardinal DiNardo said it was fitting to make the consecration to her during a pandemic.

Cardinal DiNardo also shared a message of encouragement with the more than 1,600 viewers.

The United States has been hit harder than any other nation in deaths connected to COVID-19, with 62,547 known coronavirus fatalities as of April 30, with about 2,000 more people dying each day. Although federal and state health officials have been advocating strict measures to “flatten the curve” of infections and fatalities, none have said that deaths have yet reached their peak. Some Americans have loudly grumbled about the slow pace of “reopening” states to travel and commerce, while health officials fear a second wave of infections.

The prayer of consecration incorporates language used in consecrations of Popes Pius XII, John Paul II, and Francis. Prayers from Masses of the Blessed Virgin Mary were also included.

The brief Liturgy featured a decade of the Rosary, meditating on the fifth Sorrowful Mystery: The Crucifixion and Death of Our Lord.

“With the love of a Mother and Handmaid, embrace this diocese which we entrust and consecrate once again to you, together with ourselves and our families,” Cardinal DiNardo said during the consecration.

The prayer service concluded with the Marian hymn “Regina Coeli.”

In 1959, Patrick Cardinal O’Boyle of Washington again consecrated the United States to the Immaculate Heart of Mary. This was the year when construction of the National Shrine of the Immaculate Conception in Washington was completed. The national shrine was elevated to minor basilica status by St. John Paul ll Oct. 12, 1990. This was renewed by the U.S. bishops Nov. 11, 2006.

At parishes around the Archdiocese, small communities held private May crowning devotions.

At St. Anthony of Padua Catholic Church and School in The Woodlands, parishioners and students were welcome to drive by the parish’s piazza to hand deliver flowers to parish staff who placed them at an outdoor statue.

“It is important that we do this,” Cardinal DiNardo said. “Along with Mary and her Magnificat, no matter where we are in our emotions today, we can say my soul magnifies the Lord for He has done great things for us in Jesus His Son. Christ Jesus and His mother, who bore Him in her womb, who bore Him in her heart, tells us to follow Jesus.”