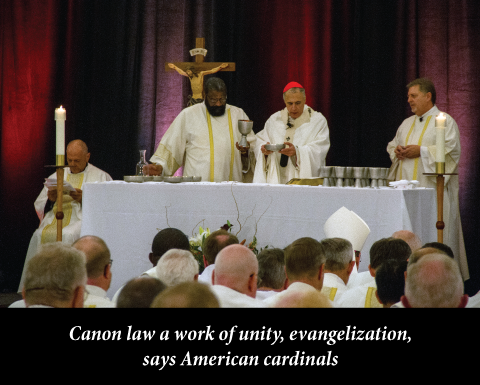 HOUSTON — With incense floating heavenward, Daniel Cardinal DiNardo of Galveston-Houston welcomed more than 340 canon lawyers, judges, teachers and members of the Church’s judicial community by invoking God’s blessing upon them in thanksgiving for their work.

Cardinal DiNardo emphasized the unitive aspect of canon law, saying, “It is great, amidst all the canons of the church — canon of Scripture, of praying, of creeds — to also to have the canon of laws to keep us together in communion with the body of Christ.”

The cardinal was the principal celebrant of an Oct. 12 Mass during the Canon Law Society of America’s annual convention in Houston. Concelebrants were Bishops Robert P. Deeley of Portland, Maine; R. Daniel Conlon of Joliet, Illinois; and Steven J. Raica of Gaylord, Michigan.
Cardinal DiNardo joined Donald Cardinal Wuerl of Washington in recognizing the efforts of the international judicial community following Pope Francis’ recent apostolic exhortation on marriage and family life, “Amoris Laetitia.” Cardinal Wuerl gave a keynote address reflecting on his experience the last two Synods, as well as “Amoris Laetitia” (“The Joy of Love”), noting “the value and achievements of the emphasis on Synodality.”

“Our Holy Father engages the Synod as it has been structured since the days of Blessed Paul VI as the instrument to bring to further maturation the level of collegiality called ‘synodality’ to reflect this structure which is distinct from councils, ecumenical or provincial,” Cardinal Wuerl said. The exhortation was Pope Francis’ reflection on the discussion, debate and suggestions raised during the 2014 and 2015 meetings of the Synod of Bishops on the family.

"Amoris Laetitia is not a list of answers to each individual human question, rather it’s a call to compassionate accompaniment in helping all to experience Christ’s love and His mercy... to the extent that our ministry does that, it’s also an evangelizing action.” This call and challenge to go out and encounter and accompany is the very heart of evangelization, he said.

The most significant focus of the pope’s perspective is the recognition that ecclesial structures count. Under this understanding, ecclesial structures “serve the mission of Christ” and “remain open to God’s spirit and God’s covenantal plan,” according to Cardinal Wuerl. He said CLSA members understand and cherish this role in the Church, dedicating their lives and faith-filled ministries to the Church.

Cardinal Wuerl looked to the future and said the canon law community will continue to be greatly involved in the Church’s efforts to apply the teachings and magisterial works to the lives of individuals struggling to make their way with Christ and his Church.

“Synods have taken on a unique and special role in the life of the Church as a structure to count our blessings,” Cardinal Wuerl said. The outcomes of those two Synods will “come alive” in the work of those in the CLSA and the church communities, he continued.

The convention, which ran from Oct. 10 – 13, featured more than 18 speakers focused on significant issues within the Church, including CLSA President Father Manuel Viera, OFM, who said in his Oct. 12 homily that the mission of canon lawyers is no different than of his Franciscan community. St. Francis of Assisi “wrote a very simple rule of life: to live the Gospel life of Our Lord Jesus Christ. That’s not the rule of life only the Friars Minors, but it’s the rule of all of us.”

Referring to the annual convention, Father Viera said “year after year, we examine ourselves so that we may not become complacent, but allow the spirit of God to love in us, and to change us and to transform us.” Established in 1939, the CLSA is dedicated to the promotion, study and application of canon law in the Catholic Church with more than 1,200 members from 35 countries within the Latin and Eastern Catholic Churches