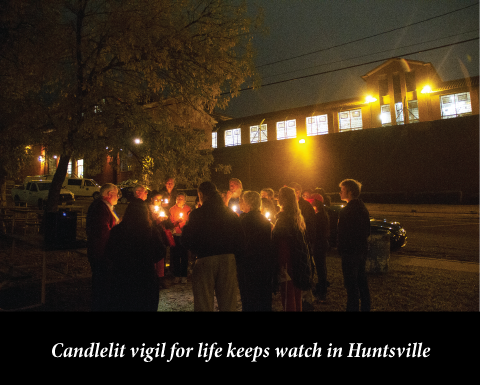 An anti-capital punishment candlelit vigil gathers outside the walls of the Texas State Penitentiary where the State of Texas executes death row inmates in Huntsville, Texas Dec. 7. John Battaglia was scheduled to die by lethal injection inside the prison, known as the “Walls Unit” that day, but received a stay of execution. Photo by James Ramos/Herald.

HUNTSVILLE — On the anniversary of of the Pearl Harbor attacks, almost 25 people stood outside the Texas State Penitentiary Huntsville Unit as another witness for life Dec. 7.

Holding candles just feet away from where the state of Texas executes death row inmates, people from different walks of life stood as visible signs of life amidst the first signs of harsh wintry weather far north of Houston.

Parishioners from Huntsville’s St. Thomas the Apostle Catholic Church, led by pastor Father Valone, students from nearby Sam Houston State University and other visitors began the vigil with a prayer service inside the church’s sanctuary. Following the service, the group walked to the Penitentiary known as the “Walls Unit” where they continued praying and sang “Amazing Grace.”

Julie Fritsch, director of the Archdiocesan Office of Pro-Life Activities who led the vigil, said she was really happy to see not only Catholics attending the vigil.

“Several of the attendees were families of inmates,” she said. Fritsch joined Dave Atwood, a Texas organizer who has been very involved in opposing the death penalty in Texas for quite sometime and has counseled numerous deathrow inmates.

A number of SHSU students who were not part of the University’s Catholic Student Center, also attended despite it being finals week.
Gathered to pray for John Battaglia, who was scheduled to be executed at 6 p.m. that evening but received a stay of execution earlier that week, the attendees heard church bells ring at 6 p.m.

These bells ring each day an execution is scheduled as an audible message for all to hear throughout Huntsville, especially those inside the prison.
According to the Texas Coalition to Abolish the Death Penalty, the State of Texas has executed 538 people since 1982, with seven put to death in 2016.

Fritsch said the office hopes to host additional events similar to the vigil. For more information on Pro-Life movement and upcoming events, visit archgh.org/respectlife or call 713-440-3446.