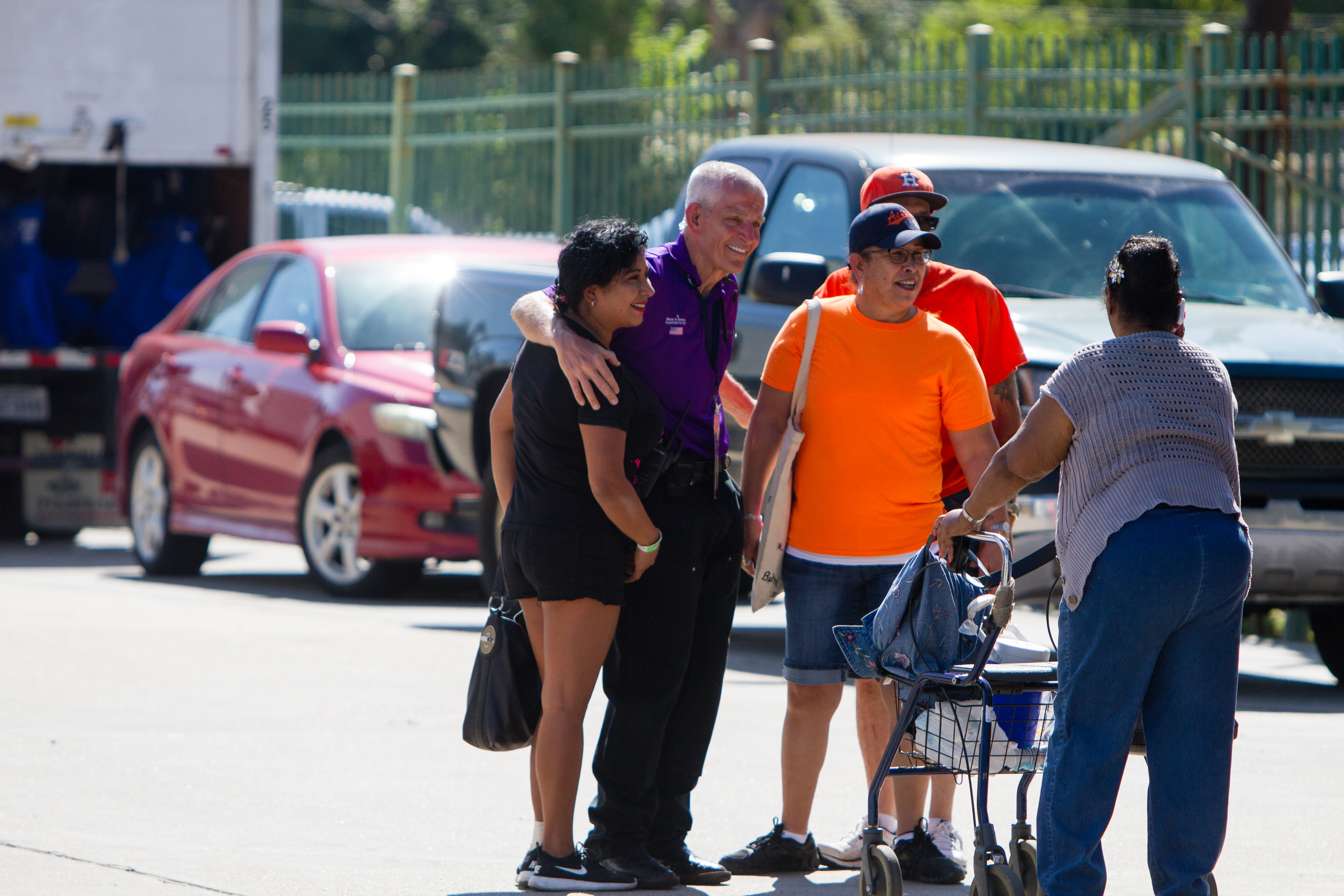 Jim “Mattress Mack” McIngvale poses for a photo with flood victims Sept. 7 outside his north Houston Gallery Furniture store. Mack has been hailed as a hero for helping those in need. Photo by James Ramos/Herald.

HOUSTON -- Wearing a pair of black cowboy boots, Jim “Mattress Mack” McIngvale eyed a growing line of 150 people, each waiting to meet him. Then, with a smile and sometimes a selfie, he gently directed weary flood victims to a warehouse full of cleaning supplies, food and water, much needed resources as Houston recovers from Hurricane Harvey.

During the storm, which inundated the fourth-largest city in the nation with 20 to 52 inches of rain, the local Houston legend -- known for his TV catchphrases, enthusiasm and same-day delivery service -- became a worldwide icon of generosity overnight.

In Harvey’s chaotic aftermath, McIngvale said his Catholic faith and duty as a person of goodwill inspired him to open his three large Gallery Furniture stores as evacuation shelters, housing flood victims from across the city, many who escaped their homes via boat.

The second day of the storm, a shivering 2-year-old girl and her family, all shivering and sopping wet, approached him. “It looked like they had gone swimming,” he said. Harvey’s rains also dropped temperatures some 20 degrees below normal. The sole English speaker for the family, the tiny girl asked him if she and her family could stay at his store. And they could.

As word spread that his store was a safe place of refuge, more and more victims started arriving. From that day on, McIngvale said he didn’t go home for a week.

“This is my obligation to help my people, what else can I do?” McIngvale said. “That’s what I was taught when I went to Catholic school.” He attended Catholic schools in Dallas before playing football for the Longhorns in Austin.

“This is my obligation to help my people, what else can I do? That’s what I was taught when I went to Catholic school.”

McIngvale sent his own delivery trucks to help rescue those stranded in their homes by floodwater, joining the already hundreds of personal and military boats already on rescue missions. In another location, he welcomed hundreds from the Texas Army National Guard also assisting with relief efforts.

Encouraged by relief efforts by parishes across the region, including his own Assumption Catholic Church that became an impromptu shelter during Harvey, McIngvale said “the Church is there to help people.”

Such help relieved stricken people like Terry Granados, carrying cleaning supplies she needed from the warehouse to her truck. .

When her Northwest Houston home flooded during Harvey’s epic rains, Granados became desperate. Her home had already flooded during 2016’s April Tax Day flood. High water stranded Granados and her family in her home for nearly a week after Harvey left Houston, draining all the supplies they had. Parts of west Houston remain under water, still without power and safe water supplies.

McIngvale, who normally can be seen greeting people at his store, stayed on the front lines and continued to welcome people streaming into his 100,000 square-foot business seeking shelter. But what he saw disheartened him.

“Seeing the devastation on these people's face,” is tough he said. Harvey’s havoc did not discriminate with “anguish, anxiety and stress.”

But still, McIngvale said the solidarity and enduring faith of the people who lost everything has inspired him. He was incredulous when people questioned his decision to open his stores as a shelter.

“What the else hell am I supposed to do? Let my people drown?” he said. “It wasn’t a choice, it was an obligation, there’s a big difference. That’s the way I was raised, that’s what my parents taught me, that’s what I needed to do. There’s nothing to it, it’s who I am. I’m part capitalist, I’m part social worker.”

This wasn’t McIngvale’s first time with hurricane relief. In 2005, he helped contribute to relief when the Houston Astrodome opened its doors as a shelter for Louisiana evacuees from Hurricane Katrina.

McIngvale said he will continue to help while people remain in need. He called others to “keep the faith.