By Leah Reed, Special to the Herald 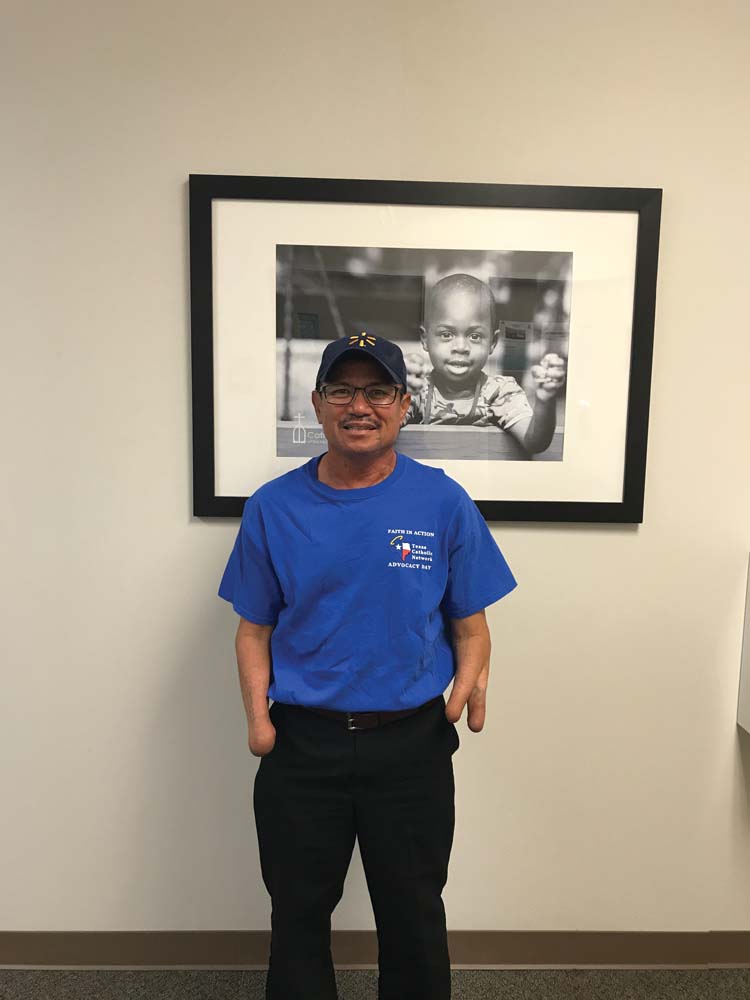 After many years living in a refugee camp on the Thailand-Burma border, Ta and his daughter were finally accepted to be resettled in the U.S. through the United States Conference of Catholic Bishops. Photo courtesy of Catholic Charities.

HOUSTON — After suddenly losing his hands and forearms in a landmine explosion, Tip Ta was left with few options to care for himself and his young daughter.

Burma, a country in Southeast Asia that has experienced political strife, civil unrest and internal conflicts in recent years was proving to be a very difficult place for a single father to raise his daughter. In the midst of genocide, Ta and his daughter were forced to leave their home country of Burma.

After many years living in a refugee camp on the Thailand-Burma border, Ta and his daughter were finally accepted to be resettled in the U.S. through the United States Conference of Catholic Bishops (USCCB).

The USCCB assigned Ta to Catholic Charities for resettlement. This is when life began to change for them. Houston would be their new home.
Ta is one of the hundreds of refugees welcomed to the U.S. every year through Catholic Charities’ Refugee Resettlement program.

This program assists government-approved refugees from around the world to begin their new lives in the U.S. and ultimately to achieve self-sufficiency, by providing them with opportunities for education, housing, food, financial assistance, cultural orientation and job development.

Catholic Charities’ staff and Ta got to know each other well, and his friendly spirit and sincere gratitude came to be known by many. It wasn’t long before a mutual respect was garnered between Catholic Charities and Ta, or Mr. T as he is affectionately known around the office.

Ta immediately started taking ESL classes to learn English, and he did small jobs for people in the community, such as building tables, shelves and fences for his neighbors.

Unfortunately, these small jobs weren’t sufficient to earn a living in the United States. Ta worked closely with case managers and job developers from Catholic Charities to search for employment. After submitting many applications and attending numerous interviews, Ta found his options limited.

He had the physical barrier of having no hands and forearms as a result of injuries from the explosion years before, although doctors had been able to perform a surgery that enabled him to use the bones in his upper arm to grasp objects.

But he had another significant barrier to face — transportation. Even if he was offered a job, he did not have a way to get there. But that changed last Christmas.

Because they are clients of Catholic Charities, Ta and his daughter enrolled in Share Your Blessings, a yearly holiday gift drive that collects gifts for children and families in need. Among the gifts Ta’s daughter received was a bicycle of her own.

The bicycle was cherished by Ta’s daughter. He also wanted to join the fun. He found a way to learn how to ride the bike, and realized that this might be exactly what he needed to help him secure a job.

He managed to use this vehicle as transportation to get himself to the local Walmart, where he was able to find employment. He excelled and quickly received a raise because of his impressive work ethic. This simple Christmas gift of a bicycle brought more than mere joy and fun to the family; it brought hope and a work opportunity, allowing Ta to grow toward self-sufficiency.

“(Ta) embodies the goal we set for all of our clients at Catholic Charities. We help them realize their own dignity and recognize the capabilities God has given them,” said Cynthia Colbert, president and CEO of Catholic Charities.

In the coming months, Ta  and his daughter are soon to complete the lengthy process of becoming full citizens. Ta listens to civics lessons on his phone and attends ESL classes regularly to prepare for the test. His daughter quizzes him with flash cards.

For more information on how to help with the Catholic Charities Refugee Resettlement Program or the Share Your Blessings gift drive, contact Matt Johns at mjohns@catholiccharities.org.