Building faith: Co-Cathedral of the Sacred Heart sees a decade of prayer, hope and sacraments 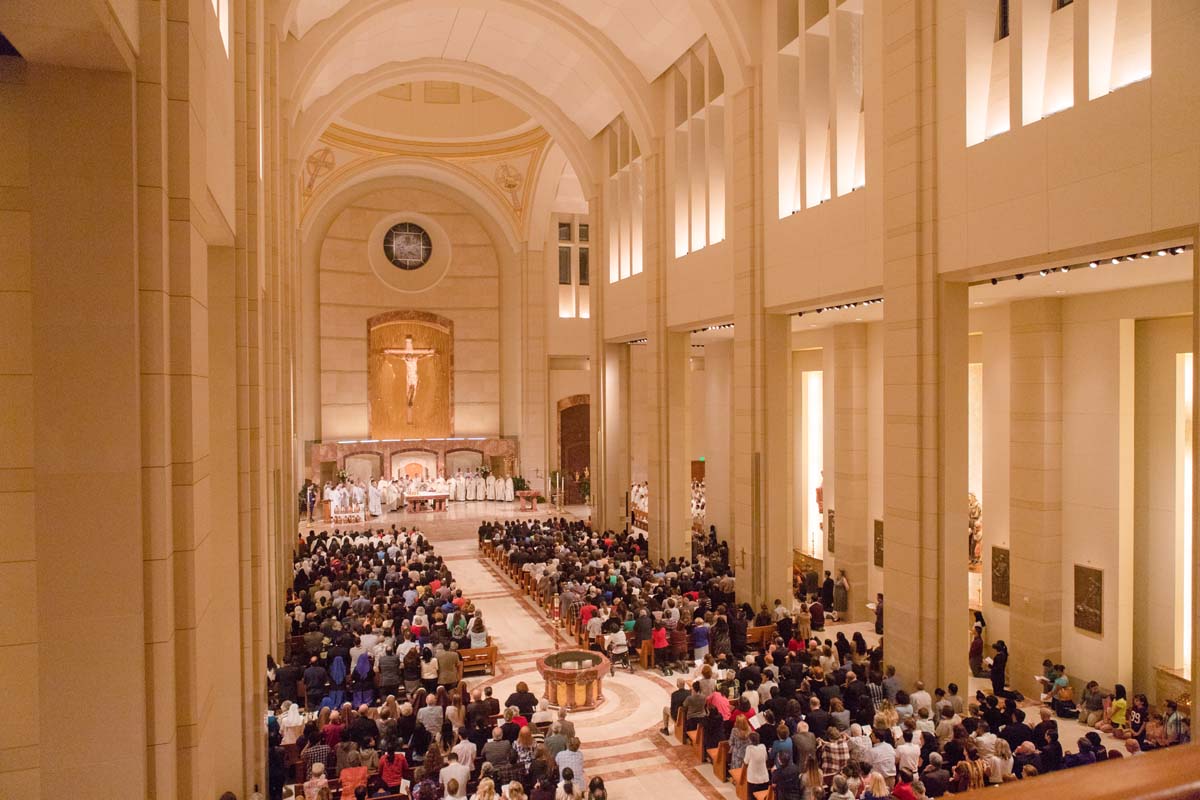 HOUSTON — In his message of hope and faith for the opening and dedication of the Co-Cathedral of the Sacred Heart, located at 1111 St. Joseph Parkway in Downtown, Pope Benedict XVI said he prayed the new Co-Cathedral would be “a sanctuary where almighty God is glorified in his majesty, a center of ecclesial life where the beauty and richness of the Catholic faith proclaimed with power, and a place where the faithful and spiritually nourished, to fulfill their mission as joyful witnesses to the Gospel.”

Following the April 2, 2008 opening and dedication of the Co-Cathedral, its 27,800-square-feet area with available seating for 2,000-plus, the ten-year-old building continues to echo St. John Paul II’s message and offer God’s people in the Archdiocese of Galveston-Houston and the city’s wider communities a sacred space to gather in communal and private prayer in Downtown Houston's south end.

'You are welcome in this church'

In his homily during the dedication Mass, Daniel Cardinal DiNardo said “I beg the Lord Jesus in his Sacred Heart to look down upon us all—on every language, nation, tongue and culture in this archdiocese. We are many cultures; we are many nations, many languages here. Sisters and brothers, what makes us one people is this altar table.”

Cardinal DiNardo encouraged all to see the Co-Cathedral, its golden cross spire reaching 114 feet, as a place open to all: “Friends of any culture, race and nation, you are welcome here, you are welcome in this church – a house on earth receptive to all.”

In a Dedication Mass full of rites, traditions and ceremony, thousands flocked to the new construction to witness the historic moment. In the long procession, following priests from the Archdiocese were more than 20 bishops of the United States, in addition to Bishop Robert Patrick Camilleri of the Diocese of Comayagua, Honduras and Coadjutor Archbishop J. Michael Miller, C.S.B., of Vancouver, Canada.

Also in his homily, Cardinal DiNardo thanked those responsible for making the new Co-Cathedral a reality, beginning with Archbishop Fiorenza, who led the Archdiocese until his retirement in 2006.

“If we could, in our imagination, combine Ezra and Nehemiah, we would find a person of spiritual insight, a shepherd and master of practical matters. We have that in Archbishop Fiorenza,” Cardinal DiNardo said. ‘’ I want to express my deepest gratitude for the long labor of love that Archbishop Fiorenza has performed in bringing this cathedral to completion.’’ The project was led by Ziegler Cooper Architects, with Linbeck overseeing the construction.

Due to the size of the building, Archbishop Fiorenza also sought the advice and input of Giorgio Borlenghi, president and owner of The Interfin Companies, LP. “I was very grateful to Giorgio for his consultation on this large project,” Archbishop Fiorenza said in a recent interview.

13 different relics lay beneath the altar

As a part of the Rite Dedication relics from 12 different saints were placed in reliquary underneath the altar of the new Co-Cathedral of the Sacred Heart.

Relics placed in the reliquary include: St. Therese of Lisieux; St. Elizabeth Ann Seton the first ever American saint; St. Leo the Great who served as pope and once encountered Attila the Hun at the very gates of Rome persuading him to turn back and St. Teresa of Avila foundress of the Discalced Carmelite Nuns.

Other saints include St. Margaret Mary Alacoque, the French mystic nun who promoted the devotion to the Sacred Heart of Jesus; St. Desideratus, St. Faustus and St. Fortunatus, second century martyrs who were among the earliest witnesses who died for Christ;  St. Rose Phillipine Duchesne, a French missionary nun who worked among Indian tribes in Missouri; St. John Neumann, a native of Czechoslovakia and the third Bishop of Philadelphia; St. Maria Goretti, a young Italian girl who chose death over consent to the impure demands of her murderer, and St. Faustina, a Polish nun recently canonized by Pope John Paul II, and the foundress of the devotion to Divine Mercy.

There is also a sizable fragment of the True Cross which St. Helena, the mother of Emperor Constantine, brought back to Rome from Jerusalem.

The call to worship

Months before the Dedication Mass, Archbishop Fiorenza blessed the 23 bells that were installed in the campenile, or bell tower, of the Co-Cathedral in a Rite of Blessing of the Bells on Dec. 12.

Archbishop Fiorenza said “(The bells would) play a very important role in the mission of the Church… to call the people to worship services, to commemorate important events—sometimes joyful events, sometimes tragic events.”

He said it is a customary tradition to bless the bells and anoint them because of their roles as “the voice of God, or Vox Dei—calling us to worship. Church bells are a constant reminder of God’s call to us to be aware of Him, to be conscious of God’s presence in our lives when we hear the church bells ringing.”

In the years since the bell’s blessings ten years ago, the campanile rings many times each day, and have done so for numerous events. The bells ring to start the annual Steps for Students 5K Run and Walk for Catholic Schools, to honor law enforcement at the Blue Mass and last year’s funeral for Sgt. Steve Perez, who died during Hurricane Harvey, as well as dozens of other liturgical celebrations.

Elements build a harmony of art

The Co-Cathedral’s organ, which was dedicated in 2009, continues to elevate worship during liturgies and offer outreach. The Opus XIX Pipe Organ, features the sound of 5,499 organ pipes and 111 stop knobs and is constructed of seven types of wood. A depiction of the Holy Spirit as a dove sits beneath a 80,000-pound dome atop the building.

Each year at Easter Vigil, catchumens are baptized in the Co-Cathedral’s baptismal font, which features eight gilded bronze images beneath the font, each drawn directly from the first eight images of the Prayer for the Blessing of Baptismal Water in the Roman Missal, some of which include Creation, Baptism of Christ, the Burial of Christ, His Resurrection and the Great Commission.

Many of the Co-Cathedrals distinctive features, including the votive chapels of saints, massive statues of the Sacred Heart of Jesus and Immaculate Heart of Mary, many ornate stained glass windows with a massive 40-foot-high Resurrected Christ, paintings and artistry, were constructed through the support of the people of the Archdiocese and special generosity of many donors.

As rector of the Co-Cathedral for those ten years, Father Lawrence W. Jozwiak said he is inspired “to see all people who come in to pray. People of all diversity, all faiths, all backgrounds who need a moment of prayer, quiet reflection since the church is open every day.”

He continued: “We are so proud of such a noble simplicity of the church that attracts people from all walks of life. People marvel at the beauty of the church, including people of other faith backgrounds.”

This April, the Co-Cathedral parish marked the milestone anniversary with a series of musical concerts and celebration of Solemnity Mass of the Anniversary of the Dedication of the Metropolitan Cathedral and Co-Cathedral on April 13. As pastor of the thriving parish, Father Jozwiak said the Co-Cathedral remains committed to serving a divergent population, including resurging Midtown/Downtown neighborhoods, the needs of an Archdiocese of nearly 2 million and the marginalized poor to come seeking help.

These efforts echo Pope Benedict’s hope that those who enter the Co-Cathedral’s doors “draw inspiration from the rich Catholic heritage of the American Southwest and find renewed strength to serve the spreading of Christ’s Kingdom and the growth of His Church in holiness, unity and peace.”