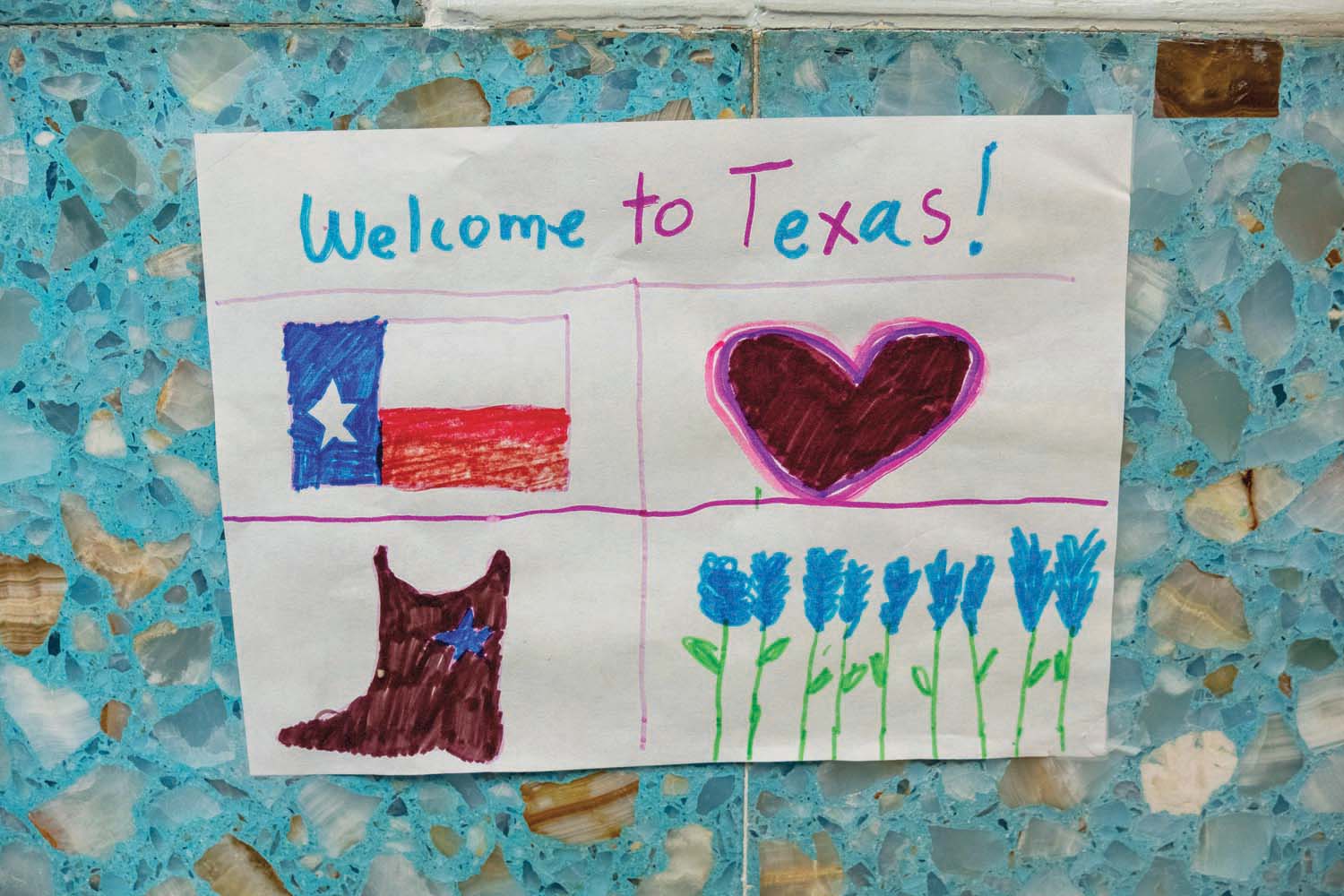 A child’s drawing greets asylum-seekers with a friendly Texas message at a Catholic Charities shelter in Laredo. After seeing a surge in numbers, shelters along the Texas-Mexico border are seeing a downturn. (James Ramos/Texas Catholic Herald)

LAREDO — Each time Jennifer Gonzalez held up a kids T-shirt, she couldn’t help but think of her own two toddlers back in Houston.

Two weeks after joining women religious and other Catholics in protesting family separation and child detention at an East Downtown Houston facility housing unaccompanied teenaged minors, Gonzalez found herself sorting through hundreds of donated clothes during a mission trip she coordinated to the La Frontera Shelter in Laredo.

The facility, operated by Catholic Charities of the Diocese of Laredo, is a waystation for immigrants and asylum seekers. Gonzalez, director of social justice ministries at St. Michael Catholic Church, led a group of more than a dozen Houston parishioners and community members that served at the shelter July 25 to July 27.

They joined other groups who have also trekked down to Laredo during the summer, including volunteers from the University of St. Thomas, Maryknoll, St. Charles Borromeo Catholic Church in Houston, the Young Adult and Campus Ministry Office of the Archdiocese and several more.

Catholic Charities and other similar agencies are operating shelters and centers to help border towns like Laredo, El Paso and McAllen. These shelters welcome migrants and refugees, who are in the country legally after traveling to the Texas border to present themselves to U.S. Border Patrol as asylum seekers.

Asylum seekers are people who have left their country of origin and applied for asylum status, typically fleeing persecution and violence in their homeland. In Laredo, many come from Honduras, El Salvador, Guatemala, Venezuela, and other Central and Latin American countries.

After Border Patrol processes them, they are sent via bus from detention and processing centers like the La Frontera shelter in Laredo, where they stay briefly before continuing to their final destination with their families across the country, where they will await their court hearing for their asylum request.

Associates at the shelter help asylum seekers reach family to notify them of their safe arrival. The families then arrange for the asylum seekers travel.

In Laredo, Catholic Charities volunteers were urging migrants to travel solely by bus, as they had received reports that asylum seekers were being detained and deported at major airport hubs in the South. Shelter records indicate that migrants are traveling to at least 600 cities from Laredo.

The shelters offer them a brief home on their long journey, with many traveling for three weeks to several months from Central and South America to reach the U.S. Many only have the clothes they are wearing, and have not had a clean shower or a warm meal in several days. The shelters are equipped to offer showers, clothing, meals, and a place to rest and sleep.

Previously, Border Patrol had been releasing families at the bus stations in border cities like Laredo and El Paso.

Since then, the Laredo shelter, a humble red-roofed, two-story building across from Holy Name Catholic Church, has grown to a fully serviced center, featuring a clinic, clothing center, hygiene facilities, cafeteria and a chapel.

In May, the shelter consistently saw 200 to 300 families a day. The shelter had opened in April and has since seen nearly 16,000 people.

A similar shelter in McAllen, which has been running for more than five years and is led by Catholic Charities of the Rio Grande Valley, saw numbers soar to the thousands. By February 2019, in El Paso, 400 to more than 700 refugees were sent to a Catholic shelter in the west Texas border city.

But when Gonzalez and her crew reached the Laredo shelter, she saw dwindling numbers.

Gabriela Karaszewski, director of the Office of Young Adult and Campus Ministry at the Archdiocese who led a group of volunteers to Laredo the week before Gonzalez arrived, also saw lower numbers. Still, there was more than enough work for the volunteers to do.

Officials at the shelter said Catholic Charities attribute the sharp decline to a newly implemented government action, the migrant protection protocol. In this action, asylum seekers are processed and given a U.S. court date and then returned to Mexico.

However, the Laredo Catholic Charities leaders said they would rather have the migrants in the U.S. where they would be safe from cartels and other dangers. If it were not for these shelters, many would go homeless, leaders said.

Jo Barron, whose office as program manager of Catholic Charities’ senior center sits just inside the shelter’s cafeteria, emphasized the strong working relationship that Catholic Charities has with the U.S. Immigrations and Customs Enforcement agency, and other related state and national groups, as well as other shelters in Laredo. Because the shelter’s overnight capacity of 20 was often reached, they worked with nearby shelters to handle the overflow.

Volunteers used the lull to thoroughly clean the facility and prepare for what could come next. Other volunteer groups delivered dozens of donations from parishes and groups in Galveston-Houston.

Max Linnville took a group of University of St. Thomas students. The campus minister said the trip “brought a different understanding to the whole immigration crisis.”

“It put the human aspect into the whole issue, versus it being [only] a political issue. What about their human dignity? How can we make sure that they’re being respected as human beings?”

Back home in Houston, anytime Linnville opens his wallet he’s reminded of his time in Laredo. A young father and his son spent time with Linnville as they waited for their bus ride out of town to their own family a day’s ride away.

Even despite the language barrier, Linnville said, “there was an immediate connection. There was a Spirit that connected us. There was obviously a presence in my heart and their heart that drew us together.”

He said when they left, the young boy gave him some Honduran money to remember them by. Today, he keeps the Honduran lempira in his wallet.

“Any time I see the money, I see the faces of these people,” he said.

Back in Laredo, De la Garza credited the success of the shelter as a “combined effort of many people of goodwill.”

Despite lower numbers, the shelter still prepares to welcome the next migrant, or guest, as the volunteers call them.

“Today’s a new day, tomorrow you don’t know what’s gonna happen,” he said. “I know that currently there are like 70 million people migrating around the world. Today things are slow, but that can change. It’s (always) a new day, and tomorrow things can be different.”

What is asylum?
Asylum is a form of humanitarian protection available under U.S. law. A person located in the U.S. may be granted asylum if they are unable or unwilling to return to his or her country of nationality because of past persecution or a well-founded fear of persecution on account of their race, religion, nationality, political opinion or membership in a particular social group.

The main difference between an asylee and a refugee is largely the process through which an individual ultimately attains protection status. Refugees, for instance, are granted protection when they are abroad before the enter the U.S.
An asylee applies for protection once they have entered the United States, as an asylum seeker.

The Catholic Church recognizes the right of sovereign nations to control their borders, but also believes that those fleeing violence and persecution should be protected.
— USCCB