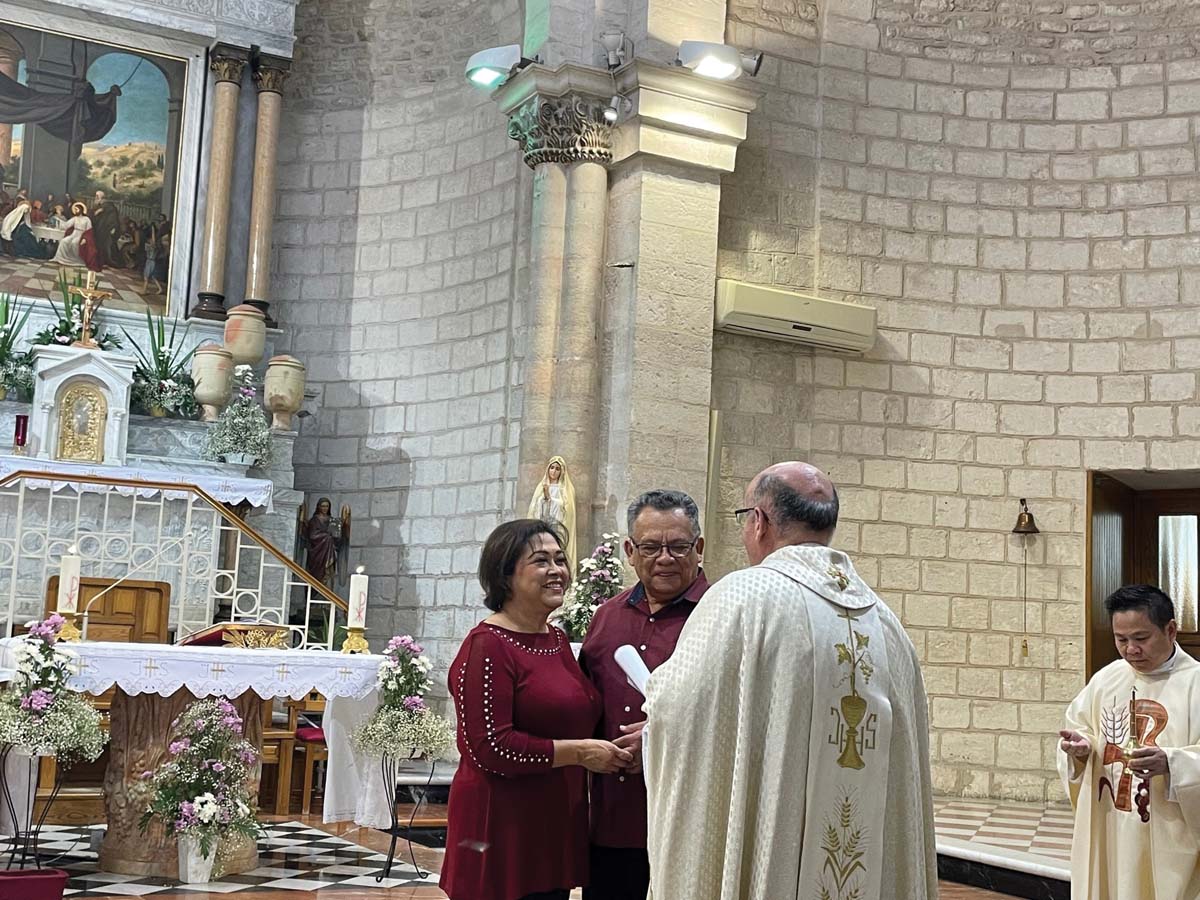 Married couple JoAnn and Joe Uriegas, Houston parishioners of St. Joseph Church downtown, renewed their vows on their 48th wedding anniversary at the Church of Cana in Israel during a recent pilgrimage. Concelebrating were Father Peter Towsley and Father Joseph Nguyen, who also participated in the pilgrimage during the four-week window when Israel opened its borders. (Photo by Jo Ann Zuñiga/Texas Catholic Herald)

ISRAEL — Journeying to the Holy Land as soon as Israel opened its borders Nov. 1 to tourists vaccinated against COVID-19 opened the eyes of the first incoming pilgrims to Christian, Jewish and Muslim residents struggling economically the past 20 months.

But Israel temporarily closed its borders again over Thanksgiving weekend for at least two weeks to review the impact of the new Omicron variant of COVID-19.

Only 11 of us, including two priests, Father Peter Towsley, formerly of St. Joseph Church downtown, and Father Joseph Nguyen of St. Vincent de Paul Church, were blessed to be part of the first group leaving from Houston to Istanbul Nov. 2.

Within that four-week window, before the parted seas slammed back, pilgrims bittersweetly enjoyed some of the most sacred Holy Land sites in the world almost to themselves. Instead of usual shoulder-to-shoulder crowds, the Catholic churches echoed with just a few voices. We were able to meditate and pray quietly before the Virgin Mary’s cave-like home tucked below what is now a massive two-story Basilica of the Annunciation in Nazareth. The solemn peace seemed almost a miracle in itself instead of the usual chattering in multiple languages.

Here is where the Archangel Gabriel appeared to Mary, saying she would become the mother of the Son of God. And Mary uttered her consent, “Let it be done to me according to your word.” Inside the cave stands an altar with the Latin inscription “Here the Word was made flesh,” Jesus incarnate.

The original Houston plan to have a group of 30-plus pilgrims whittled away to 11 disciples by the barrage of requirements of vaccines, boosters, negative PCR tests and other necessities for traveling in the time of pandemic.

Organized by Nativity Pilgrimage and Catholic tour coordinator Lori Janak, the trip Nov. 2 through 12 finally made its destination to the Tel Aviv airport and the Holy Land beyond. The 7,000-mile trek, including a 15-hour plane ride and then miles of walking on cobblestones through markets and churches, was so worth any fear and pain, soothed away by prayer.

Despite the continuing border closures, Janak said she was not giving up on her ministry of leading pilgrims to the Holy Land, describing how her mission came as a calling when she taught as a catechist.

“I heard a voice so plainly and clearly speaking to me saying, ‘You have been teaching about me, come and see where I lived,’” she recalled.

We met our Israeli guide George Stephan, who recalled playing as a child in the caves at the back of the Church of the Holy Sepulchre. Now with degrees in Biblical history and theology, he acts as a VIP tour guide leading pilgrims throughout Israel, including Mel Gibson for the movie “The Passion,” Catholic author Scott Hahn and singer/songwriter John Michael Talbot.
But even for Stephan and his family, the past 20 months have been tough with zero tourism.

“I’ve gone through my savings and then had to take out a bank loan. We pray to God that things will get better,” he said.
If tourism does not improve, he’s considering reopening his grandfather’s store in the Old Jerusalem marketplace as a florist shop. But wherever we went, Stephan was greeted like a long-lost friend by church guards, office workers and merchants after not seeing each other for almost two years.

While visiting the stark Church of the Multiplication of the Loaves and Fishes, the power and love of Christ to feed His people overcame me. Warm tears flowed while praying the Angelus with our group among ancient mosaics and two icons of Mary and Jesus. A limestone boulder juts out from under the altar traditionally where Jesus blessed the food. Of the many miracles attributed to Jesus in the Scriptures, only two are recounted in all four Gospels: the feeding of the 5,000-plus and the resurrection.

This church in Tabgha, an Arabic translation of the Greek name meaning Seven Springs, is not far from Capernaum where Jesus lived as an adult and the Sea of Galilee. The current church constructed in 1984 is built over an original small chapel from the 4th century AD, then over a large Byzantine monastery and church during the 5th century destroyed in the 7th century.

But the land still remembers. After excavations in the 1980s, the Church of the Multiplication was restored to its Byzantine form with portions of the original colorful mosaics of fish, bread, flowers and birds.

Among our Houston group, married couple Jo Ann and Joe Uriegas, parishioners of St. Joseph Church in Houston, joyfully celebrated their 48th wedding anniversary together. They renewed their marriage vows at the Franciscan church called the Wedding Church of Cana, built upon the remains of earlier Crusader and Byzantine churches.

This is the site of Jesus’ first miracle of turning water into wine, demonstrating divine power to transform not just liquids but lives, said Father Towsley. To have run out of wine would have been very embarrassing to the family hosting the wedding feast, and since these feasts could last as long as a week, there would be quite a bit of wine needed.

As we know from the Bible, Mary told the servants, “do whatever He tells you,” and Jesus willed about 100 to 150 gallons of water into wine. Not just any wine, apparently, but the very best, the priest recounted.

Jo Ann Uriegas said, “Our trip to the Holy Land was a dream come true for my Honey and me. And renewing our marriage vows in Cana where Jesus performed His first miracle was so special to us.”

During their ceremony in Cana, I was happy for them, but my heart hurt because I so wished my husband, Deacon Frank Berntsen, and I could have shared our renewal of vows as well as part of his bucket list to visit the Holy Land. But he passed away in 2016 from a cancerous brain tumor.

Then as if on cue, my attention was drawn to the flowers that happened to decorate the altar. They were white and purple — the same color combo as my wedding bouquet of white roses and irises that Frank and I chose together. My heart calmed, for I was reminded once again that he is with me. This trip for me was to fulfill his dream, but he’s in the real Holy Land of peace.
May our Advent and Christmas prayers include pleas to help the Christians and others struggling in the Holy Land.

Editor’s note: Part 2 of “Blessings await for pilgrims visiting the Holy Land” will be featured in the Dec. 28 issue.