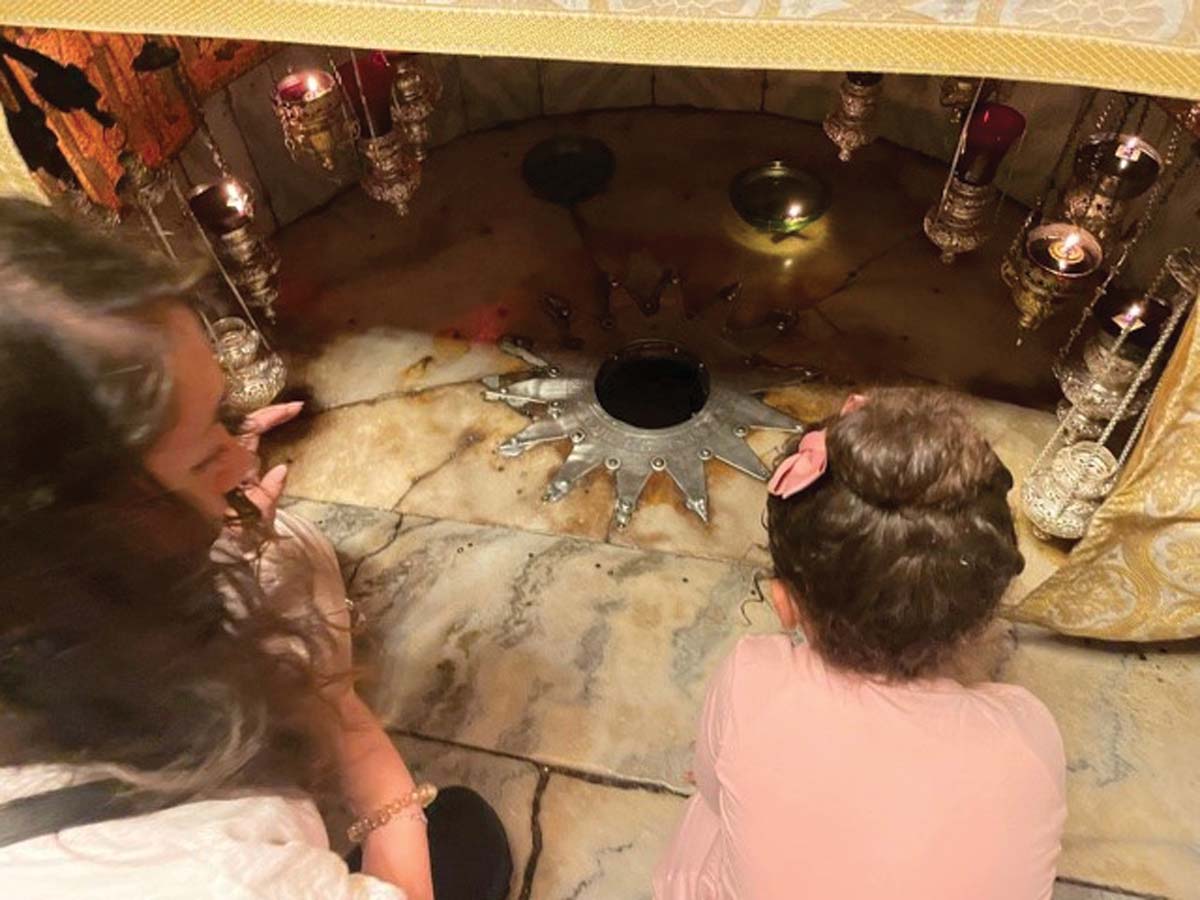 A mother and child kneel at the 14-point silver star on the marble floor of the Grotto of the Nativity that bears the inscription in Latin “Here Jesus Christ was born to the Virgin Mary” at the Church of the Nativity, first built in Bethlehem 1,600 years ago by Christian Roman Emperor Constantine. (Photo by Jo Ann Zuñiga/Herald)

ISRAEL — The Israeli government, after closing its borders over Thanksgiving weekend for at least two weeks, decided to extend its border closures through Dec. 29 — as of press time — to noncitizens to prevent the Omicron coronavirus variant from spreading throughout the country.

Even vaccinated travelers allowed into Israel will have to quarantine. Before the closure, only 11 of us from the Houston area were among the 30,000 tourists who entered Israel in the first half of this past November when the borders temporarily opened.

That number palely compares to 421,000 tourists in November 2019, according to Israel’s Interior Ministry. Churches, store merchants, hotels, farmers, and all those in the service industries said they are feeling the stranglehold tightening for two years now and continuing through Christmas and Hanukkah, their biggest holiday seasons.

But before the latest closure, Advent in the Holy Land started with fireworks and a big celebration of hope as churches and marketplaces in Jerusalem prepared for the holidays in early November. Giant Christmas trees in church courtyards spun up halfway decorated while white-light stars twinkled in the marketplace in Jerusalem.

But Bethlehem, under Palestinian Authority, appeared more somber under lockdown with hotels and inns ordered closed, blamed on COVID-19. Guard gates, checkpoints with Israeli soldiers and the separate metal wall act as barriers between Israel and the Palestinian Authority.

Our visit to Jesus’s birthplace was on a Sunday, so most Christian shops were closed. But our pilgrimage organizers arranged for the huge shop Bethlehem Nativity Souvenirs, a cooperative of Christian owners, to open especially for our group. We’re sure the thousands of dollars our group spent were appreciated as much as we were grateful to fill our Christmas gift lists for family and friends with Rosaries, crucifixes and nativity sets legitimately made of olive wood in the Holy Land.

“It’s been very hard for families with shops and other work closed for months. But my husband is still working in construction,” she said. Despite the wavering economy, construction cranes remain busy swinging throughout the country’s horizon.

As to prove her point, roving street merchants with items of leather purses, key chains, Christmas decorations and other items would cry out, “Please help my family…” as they thrust the merchandise onto unsuspecting tourists.

Our Houston group’s two priests, Father Peter Towsley, of St. Joseph Church downtown, and Father Joseph Nguyen of St. Vincent DePaul Church, celebrated Mass with us in Bethlehem at the oldest major church in the Holy Land — the Church of the Nativity. The basilica, located in the West Bank, Palestine, houses the grotto of Jesus’s birth site.

First built about 330 AD by the first Christian Roman Emperor Constantine, it is the oldest site continuously used as a place of worship in Christianity for the past 1,600-plus years. UNESCO, the United Nation’s cultural agency, includes the Birthplace of Jesus: Church of the Nativity and the Pilgrimage Route, Bethlehem on its World Heritage List.

In the years before COVID-19, a long line of people would stretch out from the front door of the Church of the Nativity waiting to enter a very low stone opening called the “Door of Humility,” which also worked in the past to keep out invaders. But our group quickly bent under the stone opening with no line at all. Municipal workers were busy stringing up Christmas lights behind the church in Manger Square.

In A.D. 614, the Persians, who razed many other churches during wars with Byzantium, spared the Church of the Nativity, supposedly out of respect for a mosaic of the Magi shown wearing Persian attire, explained our guide George Stephan, an Arab Christian.

The age of the church shows with scaffolding throughout because of ongoing extensive renovations. Not exactly the typical Christmas-card image, the place of Christ’s birth is a rock cave dimly lit by Orthodox lamps.

Instead of a star shining above, a 14-point silver star on the marble floor of the Grotto of the Nativity bears the Latin inscription “Hic de Virgine Maria Jesus Christus natus est” (Here Jesus Christ was born to the Virgin Mary). Reverence remains as pilgrims line up to kneel, kiss the star and lay their children upon it.

Besides the ancient holy sites, another highlight of the journey is Israel’s sheer vastness of topography and diversity of its nine million in population — the majority Jewish, 21% Arabs, mostly Muslims responding to daily broadcasts to prayer, and the dwindling Christian population down to only little more than 1%. But there are 103 Catholic Churches, evenly divided between Latin and Greek Melkite.

Although only the size of the state of New Jersey, half of Israel is desert, including the aptly barren Valley of the Shadow of Death known as part of the Wadi Qelt. A deep reddish-brown gorge in the Judean Wilderness that runs from Jerusalem down to Jericho, the sandy starkness houses temporary lodges for the nomadic Bedouins and their livestock.

But the remaining country is lush and fertile with olive trees, flowing red, white and pink bougainvillea, date and palm trees, banana trees and other crops that we tasted in the plethora of fresh fruits and vegetables in the local diet.

On the northern shore of the ever-blue and glistening silver Sea of Galilee, the Mount of Beatitudes seemed the most heavenly place. Green, blue and yellow streaks across the sky turned out to be wild parrots or monk parakeets zipping between palm trees.

The Mount of Beatitudes, one of the most beautifully serene places in the Holy Land, is believed to be the setting for Jesus’s most famous discourse Sermon on the Mount. A powerful summary of the fundamental teachings of Jesus proclaims the eight beatitudes, beginning with “Blessed are the poor in spirit, for theirs is the kingdom of heaven . . . .” (Matthew 5:3)

Traveling from the expansive light and fresh air of the Mount, one is plunged into the shadows of narrow streets, alleys and shops of the Via Dolorosa, meaning “way of sorrows.” Located in the Christian Quarter of the Old City of Jerusalem, the mostly cobblestone path of about half-mile or just under one kilometer traditionally retraces the steps of the crucifixion of Jesus Christ.

The 14 Stations of the Cross are stops along the Via Dolorosa where pilgrims pray to remember the torture, sentencing, carrying of the cross, crucifixion, death and burial of Jesus of Nazareth. The final stations of 10 through 14 of the crucifixion and burial are within the Church of the Holy Sepulchre, home to two of the holiest sites in Christianity — the site where Jesus was crucified, known as Calvary, and the tomb where Jesus was buried and then resurrected.

Our small group of 11 was honored to celebrate Mass inside the tomb itself. Fathers Towsley and Father Nguyen used the tomb slab as the altar while we encircled the entrance of the tomb. Our hearts were full as we lifted up our prayers along with the aroma of incense and ointments from the garments that we had wiped on the Stone of Anointing, where Jesus’s body was prepared for burial.

Father Towsley reminded us of Jesus’s transfiguration, shortly before His passion and foreshadowing His resurrection.

“The transfiguration is also to transform you and me. It showed the fullness of the divinity of Jesus from the Mount to Calvary. We’re living in a dark place, and we are called to be light.”

May our Advent and Christmas prayers include pleas to help the Christians and others struggling in the Holy Land.

Editor’s note: For Part 1 of “Blessings await for pilgrims visiting the Holy Land,” which was featured in the Dec. 14 issue, click here.