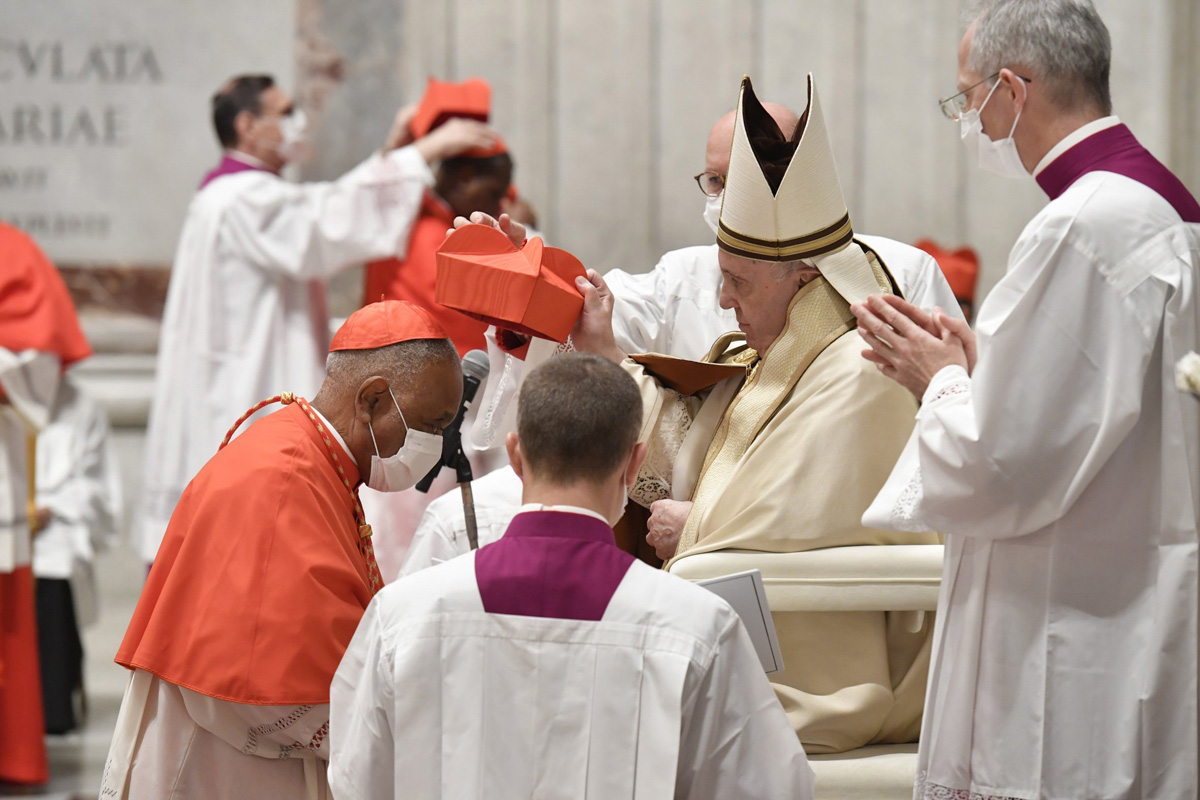 Pope Francis places the red biretta on new Cardinal Wilton D. Gregory of Washington during a consistory for the creation of 13 new cardinals in St. Peter’s Basilica at the Vatican Nov. 28. (CNS photo)

WASHINGTON (CNS) — To Father Robert Boxie III, the Catholic chaplain at Howard University in Washington, the naming of Washington’s archbishop “as a cardinal is huge, it’s historic.”

On Nov. 28, Pope Francis elevated 13 new cardinals from around the world to the College of Cardinals at a consistory in Rome. Wilton Cardinal Gregory, who has been Washington’s archbishop since 2019, was among them. The pope had announced the new cardinals Oct. 25.

Father Boxie said the fact that it came in November, Black Catholic History Month, is also very symbolic. A priest of the Archdiocese of Washington, he was one of several Black Catholics who spoke to the Catholic Standard, Washington’s archdiocesan newspaper, about what Cardinal Gregory’s elevation means to them and to the Church as a whole.

A great gift to see

A native of Lake Charles, Louisiana, Father Boxie was ordained in 2016 and began serving this summer as the chaplain at Howard, one of the nation’s historically Black colleges and universities.

The priest noted that Cardinal Gregory’s elevation “puts the stamp of approval on the ministry, the service, the pastoral leadership that Archbishop Gregory himself has done for our Church in the United States, all of his accomplishments and his contributions individually.”

The elevation of Cardinal Gregory makes Father Boxie feel “extremely excited and proud, especially as an African American priest, I hold my head up a little bit higher, I stick out my chest a little bit more, because one of our own, from our community, is now a prince of the Church, especially when for so long in our country, Black men were denied the opportunity to even enter into seminary here.”

Washington Auxiliary Bishop Roy E. Campbell Jr., who serves as the president of the National Black Catholic Congress, said Cardinal Gregory’s elevation “is significant because there are so many different firsts” for the churchman.

“This is a man, who as a boy, embraced the faith that he was not baptized into and reared into until he chose to follow it,” explained Bishop Campbell, who also is pastor of St. Joseph Parish in Largo in Largo, Maryland. “And then to go on to become a priest and to do wonderful things as a bishop of Belleville (Illinois) and then to lead the U.S. Catholic Conference of Bishops (as president), especially when we had to deal with the outbreak in 2002 of the clergy sexual abuse scandal throughout the country, and as archbishop of Atlanta and then coming here.”

He’s the first Black archbishop in Washington, “the seat of democratic power and importance in the world,” the bishop said, and now “to be named a cardinal, the first Black cardinal from the United States — that’s significant.” 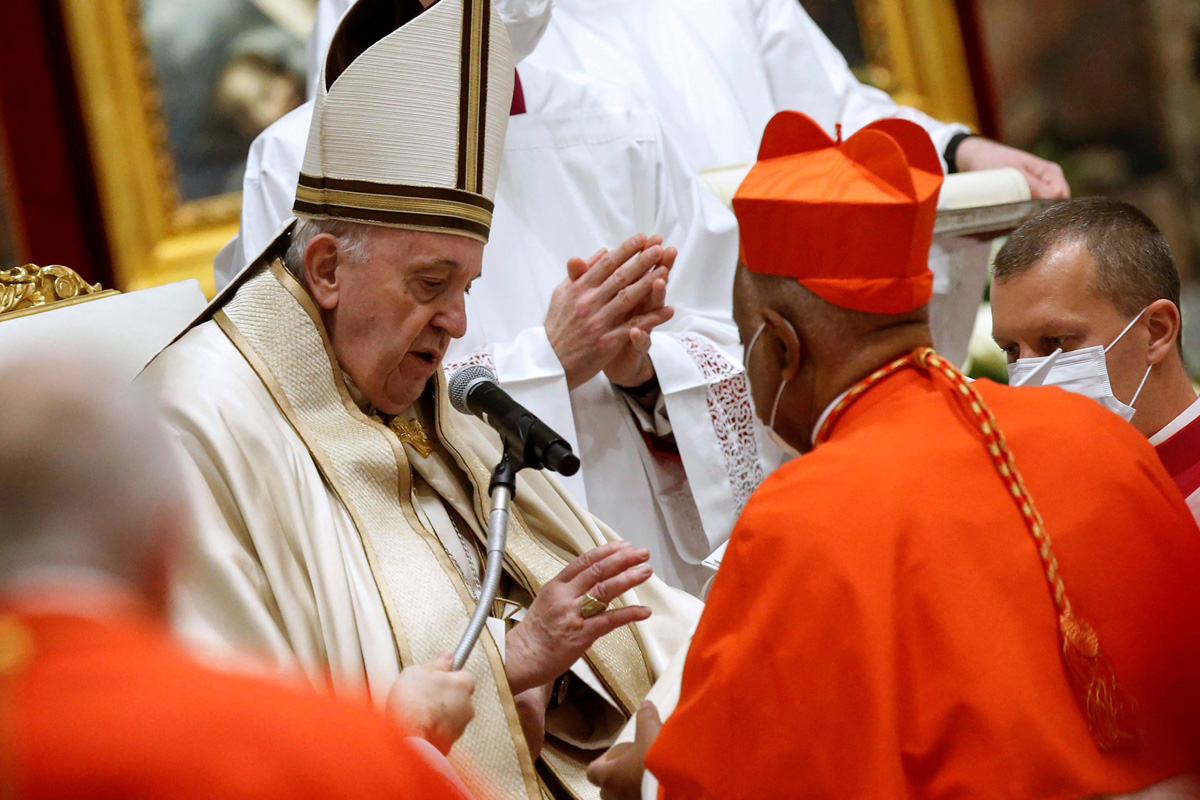 Everyone has gifts to offer

“And it shows that the Church recognizes that everyone has gifts to offer to the Church, to their community, to their fellow man wherever they are, and they recognize that in naming him a cardinal,” he said. “And young Black men who may wonder, ‘Could I be called to the priesthood?’ can see that, yes, not only can you be called, but the gifts that you bring with that call will be recognized by the Church.”

For Black Catholics, Cardinal Gregory’s elevation means “our faith, our talents, our willingness to be part of and work for the Church in our community, we have an impetus to continue to do that because a leader who looks like us has been recognized at the highest level in the universal Church, that means influence in the direction the Church takes in reaching all of the people of the world.”

“His talents for helping the Church, for helping Black Catholics, for helping all Catholics and all people in this country, and now worldwide have been recognized,” Bishop Campbell added, “and the Church wants to put them to use.”

A time for healing

“I certainly rejoice. For those of us who are African American Catholics, to have the first African American cardinal named is just wonderful,” said the Sister of Notre Dame de Namur, who is the former president of the National Black Sisters’ Conference. She also is the former executive director of Pax Christi USA and now serves on the leadership team for her religious order.

Pope Francis, she believes, also particularly understood there is “much healing that certainly needs to take place with the Catholic Church in the United States, so I think he’s made a wise decision in calling forth a holy man ... a man who really listens to the people, a man who is steeped in his faith, and a man who will journey with the people. So I’m just blessed, I’m grateful.”

Asked about Cardinal Gregory’s leadership qualities, Sister Chappell pointed to “his ability to listen” and be able “to listen to diverse opinions and to try to find the common threads that somehow can unite people. And yet, he’s also a man of integrity; he’s a man also rooted in prayer and his faith, so he doesn’t back away from his beliefs. What I have seen him do is to try to bring people together, to look at how do we make it better, how do we bring the good news to all God’s people.”

Monsignor Raymond East, pastor of St. Teresa of Avila Parish in Washington, and a nationally known evangelist and speaker, said Cardinal Gregory’s elevation is “a great sign of encouragement” the Church is recognizing “the gifts of the Black Catholic community, which is both African Americans who have been here for a long time, newly-arrived African immigrants, people from the Caribbean, Afro-Latinos, people from Haiti and from all the islands, the whole African diaspora.”

Cardinal Gregory “who is one of the most gifted Church leaders in the whole country,” Monsignor East said. “He’s been a great light to us, and we’re so blessed to have him here in this diocese, and to have him in this very special place, in our nation’s capital, to be the first African American Catholic cardinal, it’s tremendously exciting.”

Hilda McDougald, a 100-year-old parishioner of St. Luke Parish in Washington, attended a Mass then-Archbishop Gregory celebrated at St. Luke Church on Oct. 24, one day before Pope Francis named him as a new cardinal.

When asked what it meant to her that the pope named Archbishop Gregory as a cardinal, she said, “Things are changing, times are (changing) ... What a change, what a change!”

She recalled how during times of segregation, Black Catholics had to sit in the back of church and wait until the end of the Communion line to receive Communion after white Catholics.

As for Cardinal Gregory, she said, “I just love him. I admire him, I really do. In fact, I admire all of our priests. All (of them).”