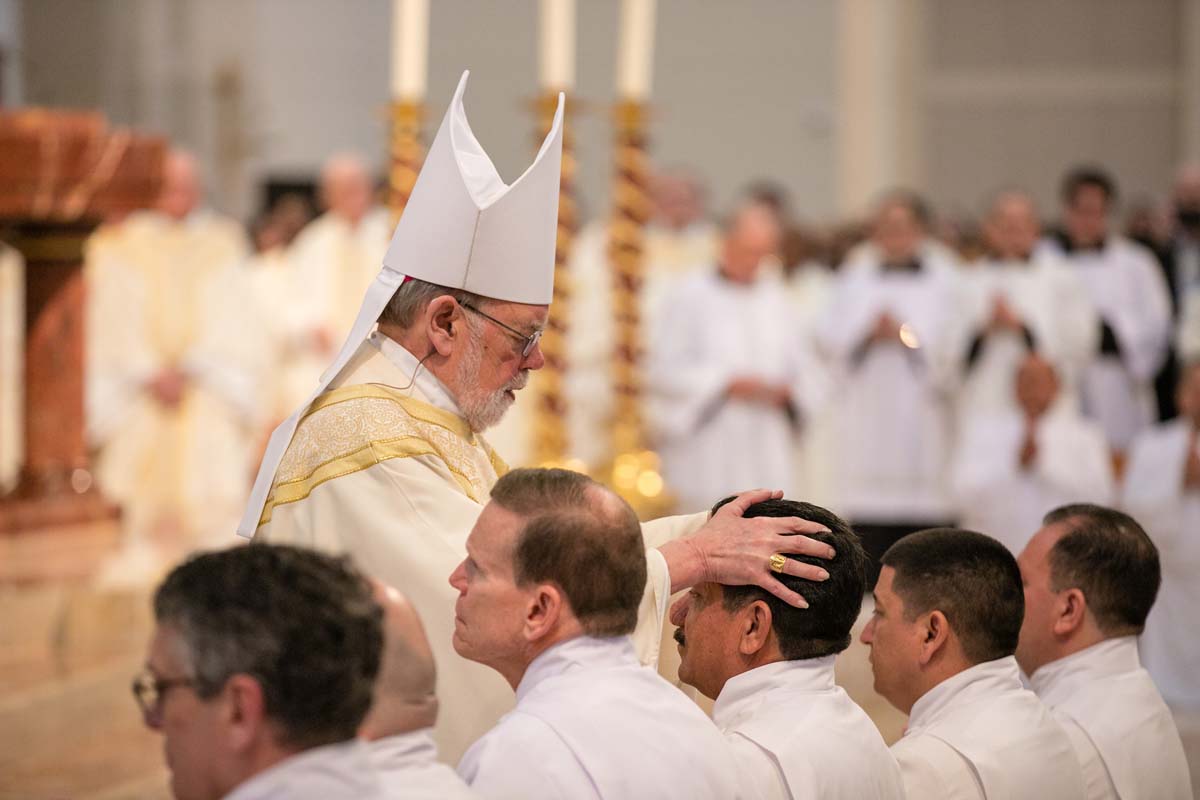 Auxiliary Bishop George A. Sheltz places his hands on a deacon-candidate during a Mass of Ordination Feb. 23. 42 men were ordained to the permanent diaconate on Feb. 22 and 23 at the Co-Cathedral of the Sacred Heart, making it the largest class of permanent deacons ordained in the Archdiocese.

HOUSTON — When NASA engineer Charles Pitman was furloughed again for the third time by recent federal government measures during his six-year diaconate formation, he kept working on becoming a deacon, never letting up on his daily prayers of the Liturgy of the Hours. On Feb. 22, his prayers were answered when he was ordained along with 19 other men. Then the next morning, on Feb. 23, Auxiliary Bishop George A. Sheltz celebrated all over again, along with Archbishop Emeritus Joseph A. Fiorenza, with another group of 22 newly ordained deacons.

For the class of 2019, a total of 42 men were ordained to the permanent diaconate, one of the largest classes locally out of the 156 men and their wives currently in formation at St. Mary’s Seminary, said Deacon Phillip Jackson, director of the Archdiocese’s Office of the Permanent Diaconate.

“What a joy and blessing that we have so many new deacons to ordain that we had to do it twice,” Bishop Sheltz said of the holy orders.

IN PHOTOS: Mass of Ordination of the Permanent Diaconate 2019

The Co-Cathedral of the Sacred Heart in downtown Houston hosted both ordinations with crowds of family and friends filling up almost to capacity with about 1,200 people each time.

“You are a sacramental sign of Christ’s friendship,” Bishop Sheltz said in his homily. “Remain as an inner conduit for the grace to serve as Jesus did, generous and lovingly.”

Pitman, now a deacon at St. Hyacinth Catholic Church in Deer Park, said, “I perceived God’s call to the diaconate more like Elijah in the cave who heard God in a whisper. I think God was calling me through the encouragement of my family and friends.”

His wife Pamella, liturgical director at St. Hyacinth who leads the choir during Masses, said she was ecstatic at the culmination of years of study since both she and her husband received Master’s degrees in pastoral studies from University of St. Thomas as part of their formation. But she is still realizing impacts on family life.

“I really didn’t think I would feel the ‘abandonment’ that many of the other wives had been discussing,” Mrs. Pitman said. “Then Father asked Charles to sit somewhere else for daily Mass when he was delivering his reflections. Our going together to Communion as a family has changed. I came to realize that one gift had been exchanged for another. Though we may not physically be holding hands and praying, our prayers remain united with those of our church family.”

The new deacons also included a medical doctor, social worker, an educator and others with full-time careers and mostly married with families. They all answered God’s call to add to their already busy schedules to serve the three-tier mission of Word, Liturgy and charity.

Dr. William Chen, M.D., of St. Ignatius of Loyola Catholic Church in Spring who was highlighted in this year’s Diocesan Service Fund video shown to more than 150 parishes, said, “I felt the tug to serve. I serve people in the medical field to help heal their body. And I hear God calling me to help heal their soul and to guide them back to Him.”

Deacon Dominic Madrid, of St. Anthony of Padua Catholic Church in The Woodlands, is a math and religion teacher, as well as dean of middle school students, at St. Elizabeth Ann Seton Catholic School in Houston. Hoping to show that “the diaconate is a vocation in its own right, but also on the path to the priesthood,” Deacon Madrid invited his students to attend the Friday evening ordination Mass.

“If only one of my students is inspired by the ordination then it was all worth it,” he said. “My greatest hope for all my students is that they will achieve the freedom to choose to become what God has created them to be.”

Along with a Catholic education, he wants to ensure children receive the support they need to stay active in the Church.
“Adults, and very often teachers themselves, underestimate how smart kids really are and their ability to do amazing things when presented with the right tools,” he said. One of those tools is conscience, he said. “When a child leaves my classroom, hopefully they will continue to behave as true Christians, even when no one is watching.”

They should “give the diaconate a shot, rather than waiting for retirement to begin this journey,” Madrid said. “The diaconate is a powerful instrument for strengthening families that goes virtually untapped, because so many men are ordained decades after their child-rearing years have passed. I can say that it is doable.”

Madrid and his wife and started the diaconate formation program when their daughter was three years old.

“The diaconate strengthens the family; both wives and young children adopt the spirit of the diaconate and it shapes the way children see the world. The family becomes a nursery for religious vocations.”

In the beginning, Madrid felt a little like Abraham in the Bible, who heard the voice of God calling and asking something that didn’t seem to make a lot of sense to others. He also compared the discernment process to jumping hurdles in a race.

“The process takes a great deal of effort and spirit. You can’t take your eye off the goal or allow doubt to slow you down. Discernment happens one step at a time. God always asks for the faith first and then He provides the sign,” he said. “God knows the way and will guide you. Our faith can only be as great and powerful as we allow it to be.”

Rolando Rodriguez, a deacon at St. Gregory the Great Catholic Church in Houston, said he didn’t realize how great of an impact the ordination Mass would have on his “heart and soul.”

The Mass really “hit me deep inside,” Deacon Rodriguez said, calling the Mass a “wonderful” and “great experience.”
Having his family attending his ordination Mass was “such an amazing blessing” he said. People came from all over Texas and Mexico to witness his ordination, including two priests, who are cousins, join in concelebrating the Mass.

Deacon Rodriguez said the hardest thing about the journey to the permanent diaconate was realizing and hearing the call from God. He had his family, his daughters, his life altogether, but when he finally understood that the call was truly meant for him, a decision he says took a while, everything settled in.

He said he looks forward to continuing his efforts in prison ministry, where he works with immigrants at the former Immigration and Naturalization Service agency.

Deacon Edward Gallagher and his wife Martina, both of St. Elizabeth Ann Seton Catholic Church, exchanged rings after the ordination Mass, just as they did on their wedding day.

The rings served a symbol of the second Sacrament Deacon Gallagher entered, Holy Orders. He said the two of them want to integrate Holy Orders into the marriage, which in no way interferes with the happiness and love they have in their nearly 31-year-old marriage.

The day had been “one of the most beautiful experiences” of his life since his wedding with Martina, he said. “And I remember the birth of my children.”

“But the most important thing is it’s a call to service, and giving my life now to the parish community and to the Church, and to charity,” he said.

Deacon Gallagher will continue working with youth who are in custody in downtown Houston with Special Youth Services at the Juvenile Detention Center.

While he wasn’t sure about how many attended the Mass that day in support of him, he didn’t care.

“The numbers don’t matter to me,” Deacon Gallagher said. “I couldn’t have done this without my family. My wife has journeyed this entire six years of formation at my side. And then for my family to share in the joy of this experience of this ordination... It’s a joyful occasion, one I’ll never, ever forget.”