Bishop McCarthy was a ‘true son of the Church’ 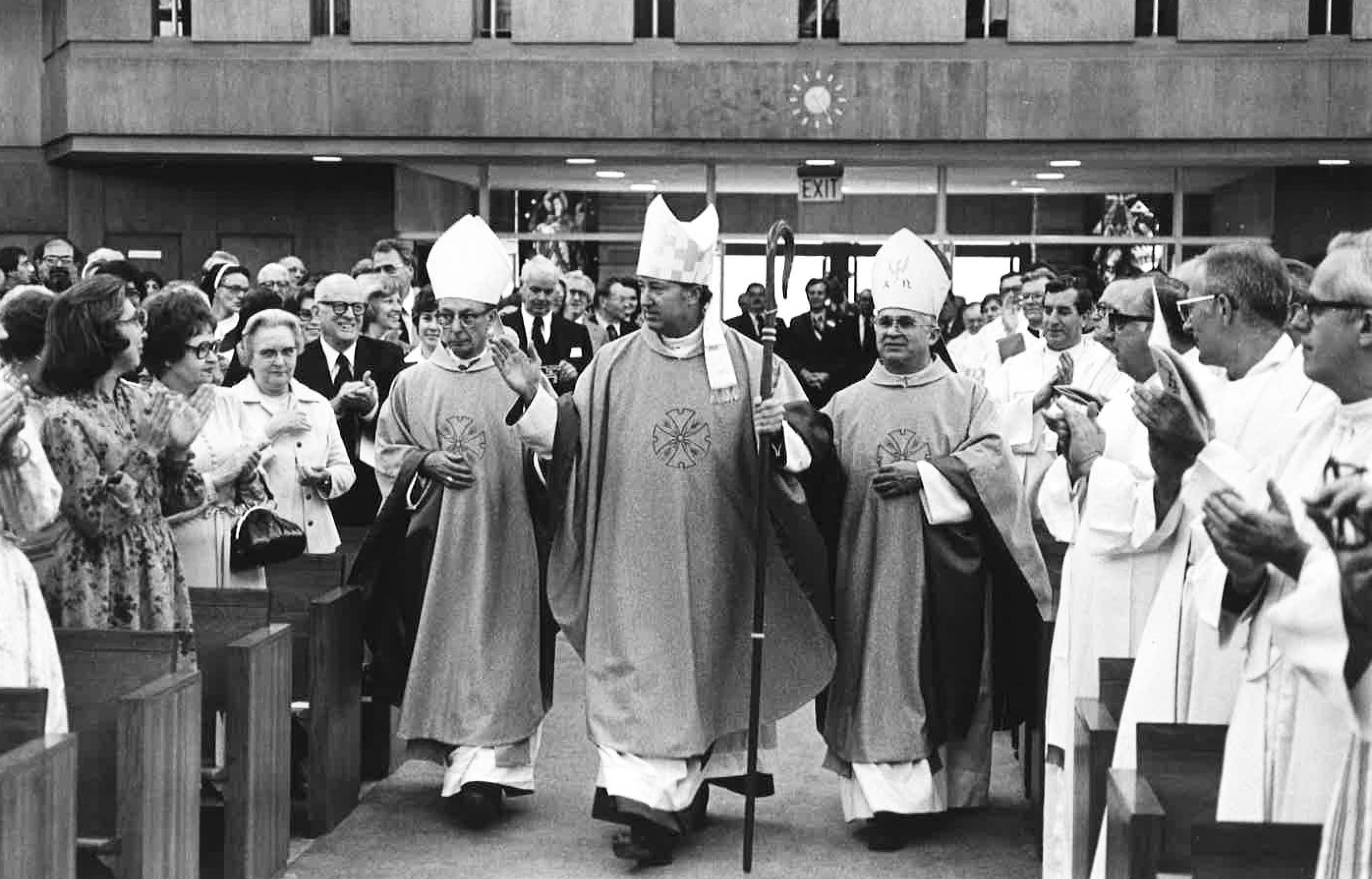 HOUSTON (CNS) — Bishop John E. McCarthy, who served in Houston and Austin and provided national leadership for the Church in its work to address systemic poverty, died Aug. 18 at his home in Austin surrounded by his family. He was 88.

A memorial Mass was held at All Saints Catholic Church in Houston, the church where he grew up. Archbishop Emeritus Joseph A. Fiorenza, who has known him since their days at the seminary, was the Mass homilist. Daniel Cardinal DiNardo celebrated the Mass.

“History will record that Bishop McCarthy was one of the great priests in Texas,” Archbishop Fiorenza said.

During Bishop McCarthy’s vigil at St. William Parish in Round Rock near Austin on Aug. 23, Bishop Joe E. Vásquez of Austin, formerly an auxiliary bishop of the Archdiocese of Galveston-Houston, said Bishop McCarthy, who was a priest for more than 62 years, was a “true son of the Church.”

“He was a man filled with joy, even at the end of his life when he was suffering greatly,” Bishop Vásquez said. “He embraced the joy that comes from living a full life with Jesus and with others.”

As an Irishman, Bishop McCarthy was always ready for a fight, and he was not afraid to express his opinion, Bishop Vásquez said.

“Bishop McCarthy recognized it was Christ who chose him to serve the Church as a priest. And he was appointed to go out and bear much fruit,” Bishop Vásquez said.

The son of George and Grace (O’Brien) McCarthy, John Edward McCarthy was born in Houston June 21, 1930. The product of Catholic elementary school and high school, he attended St. Mary’s Seminary and the University of St. Thomas, both in Houston. He earned a bachelor’s degree in 1956.

On May 26, 1956, he was ordained a priest at St. Mary Cathedral Basilica in Galveston for what was then the Diocese of Galveston.

His ministry in the Church began at St. Pius Parish in Pasadena, where he inaugurated a social ministry program at the parish. He relished telling how he would give a box of groceries to parishioners and ask them to hand deliver them to a needy family, thereby gifting the giver with a better understanding of the causes and ramifications of poverty.

He quoted James 2:24 “by our works you will know us” often during his career, which included first St. Cecilia and then All Saints parishes in Houston, before he was named in 1966 as executive director of the U.S. bishops’ Committee for Spanish-speaking Catholics based in San Antonio.

In 1945 the U.S. bishops had established the committee to provide for the religious, social, economic, educational and cultural advancement of Mexican-Americans. In 1964 it merged with the U.S. bishops’ Committee for Migrant Workers. One of the committee’s most notable actions during then-Father McCarthy’s tenure was support of farmworkers in improving their situation.

He was one of the founders of what is now called the Catholic Campaign for Human Development, which is the U.S. bishops’ major domestic anti-poverty effort. In the midst of a nation coming to grips with racism and systemic poverty, CCHD provided a means for local communities to fund self-help programs and hold civic leaders accountable for community improvements.

During a weekend retreat, Father McCarthy and other socially conscious priests hammered out the initial concepts of CCHD. In 1970, the U.S. bishops launched the Campaign for Human Development (“Catholic” was added to the name in later years).

Its mandate was to fund “such projects as voter registration, community organizations, community-run schools, minority-owned cooperatives and credit unions, capital for industrial development and job training programs, and setting up of rural cooperatives.”

Father McCarthy returned to Houston in 1969 as pastor of St. Theresa Parish. There, he developed a “Sisters in Social Services” program which became a model adopted by Catholic Charities USA as parish social ministry. In 1973, he was named executive director of the Texas Catholic Conference, the public policy arm of the state’s catholic bishops, which is now called the Texas Catholic Conference of Bishops. He was only the second executive director of the conference and served from 1973 to 1979.

He came to the diocese when its see city, Austin, was still something of a sleepy college town. The diocese had about 115,000 Catholics who gathered in 107 parishes. Bishop Vincent Harris’s most quoted advice to his successor was to stay clear of the long-running rivalry between the two large universities in the diocese: Texas A&M and University of Texas. By the time he retired, 14 years later, there were about 400,000 Catholics and 20 more parishes.

From the start of his tenure as head of the diocese, Bishop McCarthy began a whirlwind of efforts to meet the needs of his burgeoning diocese, establishing missionary programs abroad and at home, encouraging parishes to bolster their social advocacy and charity work, and opening Catholic schools and parishes as more people moved into the Austin area.
He also launched its first synod, expanded its retreat center, established the Diocesan Law Project, which organized hundreds of volunteer attorneys and interpreters to provide free legal services to those in need, and oversaw major initiatives with a parish near Monterrey, Mexico and the Diocese of Juticalpa, Honduras.

Among his pastoral letters, he issued one in 1992 calling on Catholics in his diocese to practice compassion for all living with HIV/AIDS.

In a 1993 pastoral he addressed the entertainment industry citing the “tragic collapse of standards of decency, morality and honesty in TV, movie and popular music products.”

“The values contained in TV and other media products are supplanting church, community and even family as primary determinants of cultural norms in our society,” he said. “We must ask ourselves: What values are being transmitted in these media products?’’

Perhaps all of his work could be summed up in his signature conclusion, “Let us go forth, and let us go forth together.”
After his retirement in 2001, Bishop McCarthy enjoyed numerous hobbies, including a blog. In 2013 he published a collection of his writings, “Off the Cuff and Over the Collar: Common Sense Catholicism.” He is survived by a sister-in-law, Charlene McCarthy of Houston, and extended family.