Beatified teen used the internet to share ‘beauty’ of the Gospel 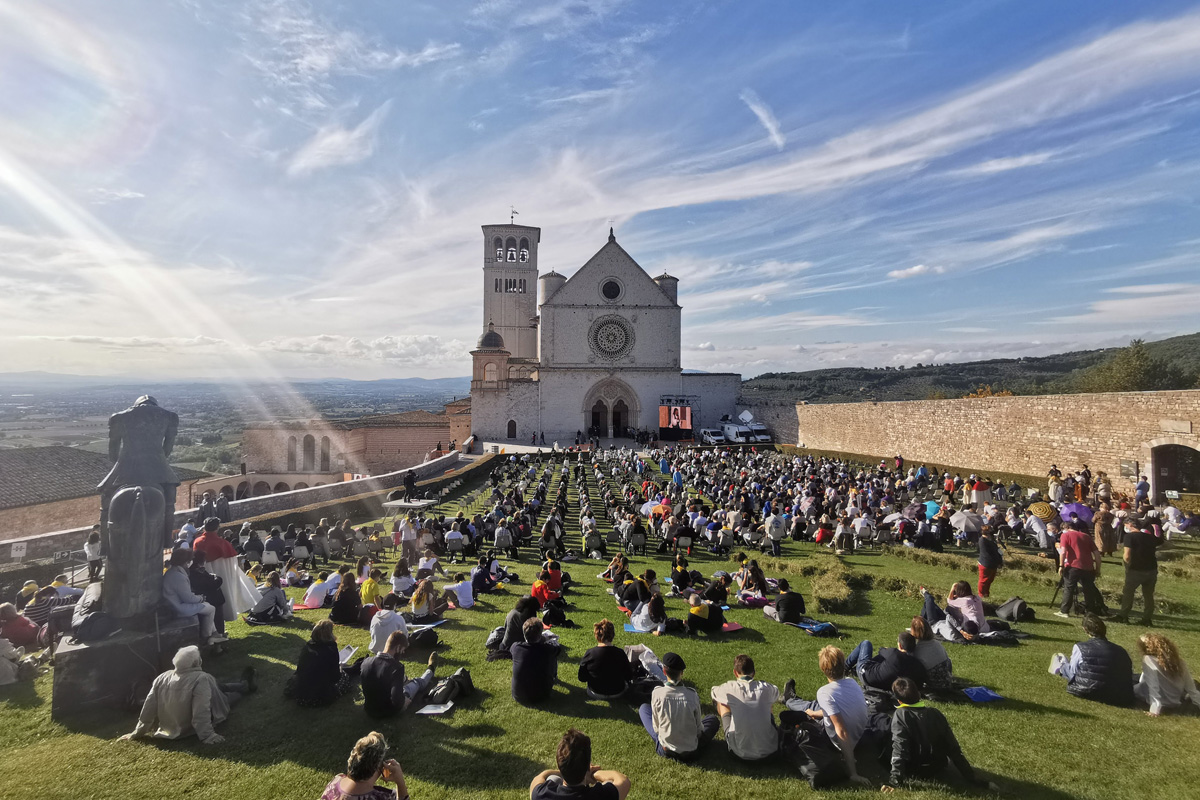 People sit outside the Basilica of St. Francis in Assisi as they attend the beatification Mass of Carlo Acutis in Assisi, Italy, Oct. 10. The Mass was held inside the basilica but measures to prevent the spread of COVID-19 meant that most of the attendees sat outside. (CNS photo/Junno Arocho Esteves)

ASSISI (CNS) — Thousands sang and applauded as Italian teen Carlo Acutis was beatified in a town dear to him and to many Christians around the world: Assisi.

During the Oct. 10 beatification Mass, Agostino Cardinal Vallini, the papal legate for the Basilicas of St. Francis and St. Mary of the Angels in Assisi, read Pope Francis’ apostolic letter proclaiming Acutis’ “blessed,” the step before canonization.

“With our apostolic authority, we grant that the venerable servant of God, Carlo Acutis, layman, who, with the enthusiasm of youth, cultivated a friendship with our Lord Jesus, placing the Eucharist and the witness of charity at the center of his life, henceforth shall be called blessed,” the pope decreed.

After the reading of the apostolic letter, the newly beatified teen’s parents, Andrea Acutis and Antonia Salzano, processed toward the altar carrying a reliquary containing their son’s heart.

The reliquary was engraved with one of the teen’s well-known quotes: “The Eucharist is my highway to heaven.”

Pilgrims flocked both to the Basilica of St. Francis for the beatification Mass as well as to the Shrine of the Renunciation at the Church of St. Mary Major, where the newly beatified teen’s remains were on display for veneration. 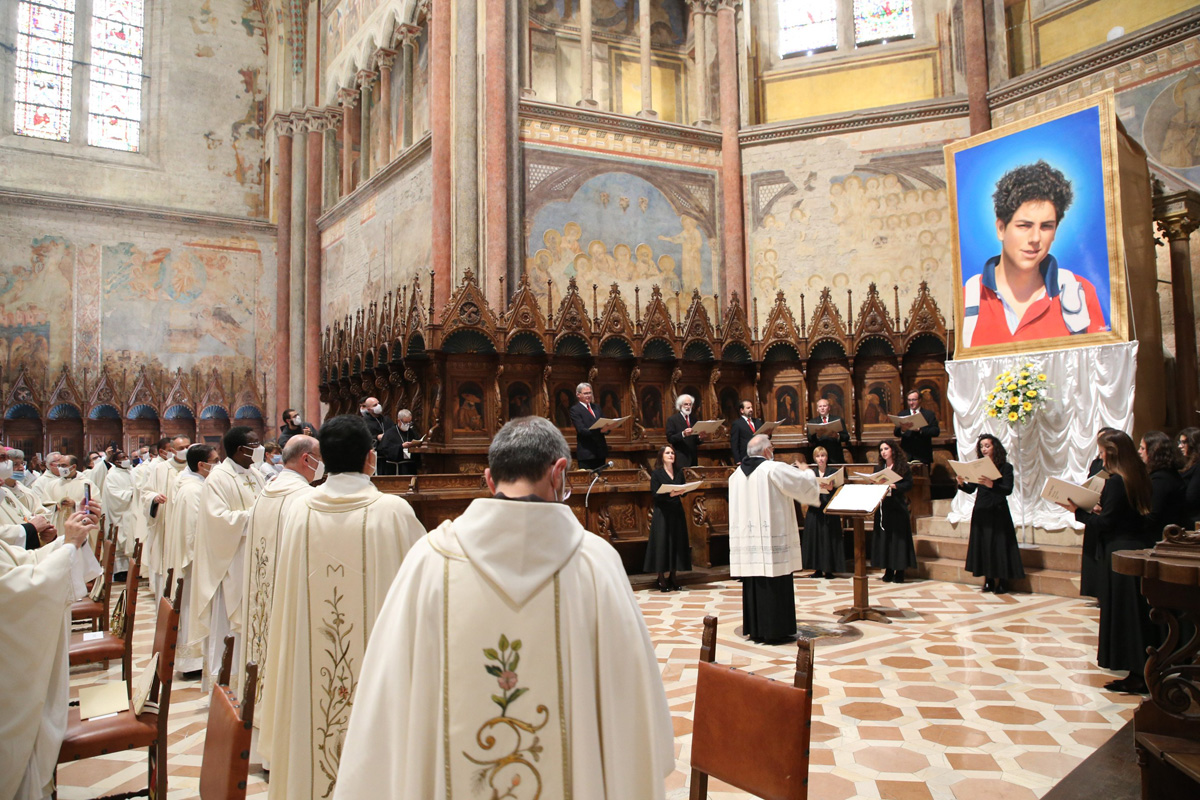 Men and women, boys and girls passed by the tomb quietly, some stopping to pray the “Our Father.” A young toddler blew a kiss goodbye to the young blessed as she passed by.
Known as the site where a young St. Francis renounced his father’s inheritance and embraced poverty, the shrine — like the city of Assisi and St. Francis himself — held a special place in Acutis’ heart.

The teen loved St. Francis “very much,” his mother, Antonia Salzano, told Catholic News Service Oct. 9. St. Francis “was a very Eucharistic soul who used to attend Mass twice a day,” and her son sought to imitate that same Eucharistic devotion throughout his brief life.

Archbishop Domenico Sorrentino of Assisi reflected on the link between the two saintly figures and proclaimed that by “providential design, (St.) Francis and (Blessed) Carlo are now inseparable.”

“Carlo’s life — always united to Jesus — his love for the Eucharist, his devotion to the Holy Virgin, his making friends with the poor, brought him closer to the spirituality of the Poor One,” St. Francis, Archbishop Sorrentino said at the end of Mass. “Both invite us to live according to the Gospel.”

The Liturgy was held inside the Basilica of St. Francis, but measures to prevent the spread of COVID-19 meant that most of those attending sat outside on seats set three-feet apart, watching on big screens.

Many young men and women came to Assisi for the beatification. For many of them, the fact that a normal teen could be beatified was a source of hope and inspiration.

“With his life, Carlo made me see that despite the small or even great difficulties — like his illness — that we could live a full and happy life if we keep our eyes looking up toward heaven,” said 19-year-old Rosanna, who was among those attending the beatification.

In his homily, Cardinal Vallini said that Acutis’ beatification “in the land of Francis of Assisi is good news, a strong proclamation that a young man of our time, one like many, was conquered by Christ and became a beacon of light for those who want to know him and follow his example.”

Reflecting on the teen’s life, Cardinal Vallini said that, like most young people his age, Carlo was a “normal, simple, spontaneous, friendly” teenager who used modern forms of communication to transmit the “values and beauty of the Gospel.”

For him, “the internet was not just a means of escape, but a space for dialogue, knowledge, sharing and mutual respect that was to be used responsibly, without becoming slaves to it and rejecting digital bullying,” the cardinal said.

Cardinal Vallini said that Blessed Acutis was a model of virtue for young men and women today, reminding them not to seek “gratification only in ephemeral successes but in the perennial values that Jesus proposes in the Gospel.”

“He gave witness that faith does not distance us from life but immerses us more deeply in it and showed us the concrete way to live the joy of the Gospel,” the cardinal said. “It is up to us to follow it, attracted by the fascinating experience of Blessed Carlo, so that our lives may also shine with light and hope.”