Be ‘true adventurers’ as witnesses for Christ and Mary, DiNardo tells catechists at AGAPE symposium 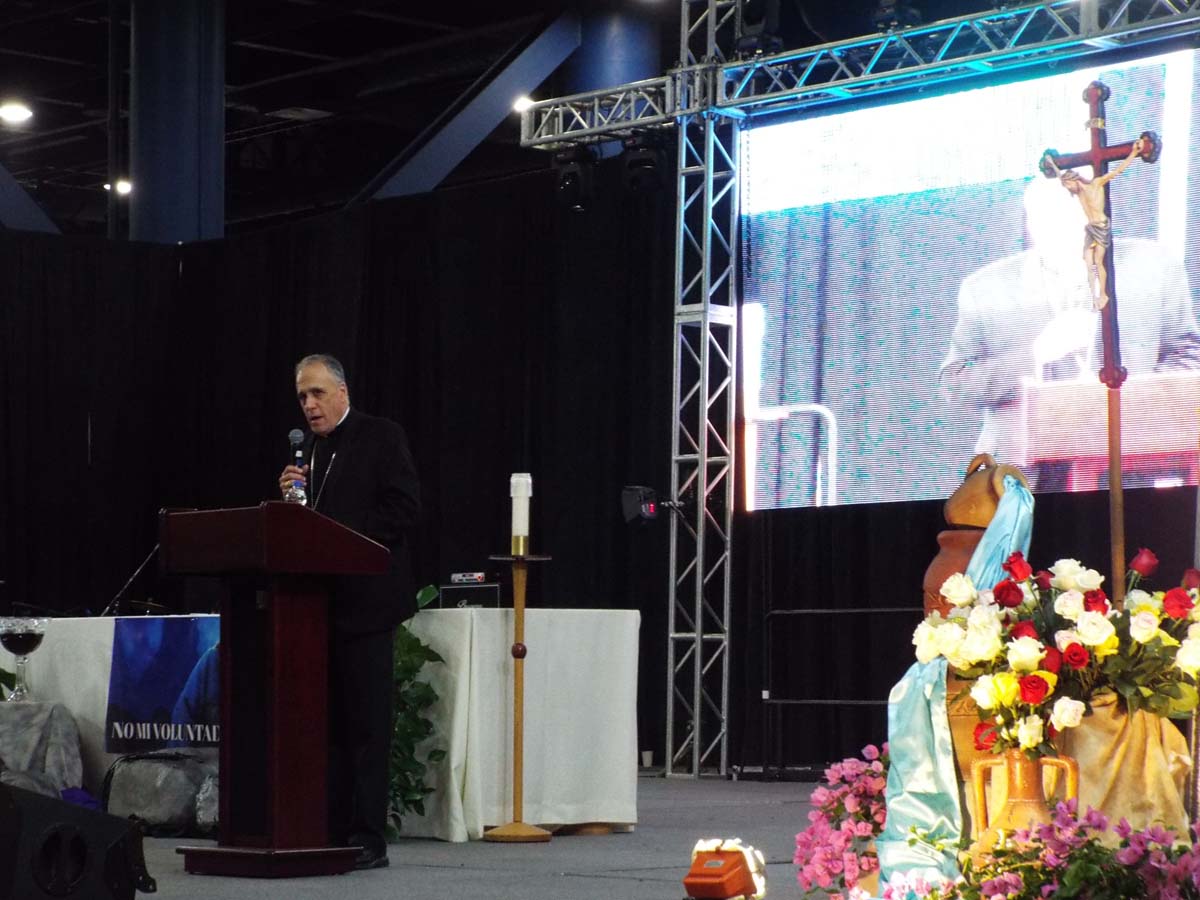 HOUSTON — Thousands of Spanish-speaking catechists and witnesses standing, clapping and singing along with guitarist Rafael Moreno raised the roof of the George R. Brown Convention Center with the performer regularly featured on EWTN Radio Catolica Mundial.

His newly released “Disciple and Prophet” had fitting lyrics for the 6,000 attending the 2018 AGAPE Symposium of Evangelization and Catechesis on March 10. The event took a year for the Archdiocesan Office of Evangelization and Catechesis to plan, recruit 400 volunteers, register people from dioceses across Texas and schedule speakers from Mexico, Venezuela, Arizona, New York and Puerto Rico.

“Thank you, catechists and public witnesses, for showing the face of Christ to others,” said Daniel Cardinal DiNardo, sharing remarks both in Spanish and English.

About 2,160 new Catholics will be entering the Church this Easter Vigil, the cardinal said, “What are they going to find? Will they find us repentant and joyful, ready to greet them?”

He urged them to continue their faithful prayer life, study for deeper insights and be “true adventurers” as witnesses for Jesus and His Mother.

Speaking on Our Lady of Guadalupe, Monsignor Eduardo Chavez, PhD., co-founder and dean of the Higher Institute for Guadalupan Studies and an honorary Canon of the Guadalupe Basilica in the heart of Mexico City, bravely made a pronouncement before the mostly Hispanic crowd.

“The Virgen de Guadalupe is not Mexican,” Monsignor said. He paused dramatically, and the audience released an audible gasp. “Thank you for not throwing tomatoes at me,” he added and the crowd laughed.

“She is from Nazareth. She is the ‘casita sagrada,’ the sacred house for Him,” he said as describing the image of a young, pregnant, brown-skinned woman wrapped in a mantel of blue-green turquoise imprinted on a tilma.
Much of what is known about the December 1531 appearances of the Marian apparition to the Catholic convert Juan Diego Cuauh-tlatoa (“Eagle Speaks” in Nahuatl, the Aztec language) comes from a 16-page manuscript, the Nican Mopohuah (“Thus It is Said”), he said.

In addition to offering the Incarnate Word to the new world, she also wore a small gold medallion with a cross engraved in it, signifying the end of the Aztec’s human sacrifices, he detailed. After describing the vicious bloodletting, Monsignor said Mary was symbolizing, “My Son is the only eternal sacrifice. I know how horrible human sacrifice is. No one else should be sacrificed.”

Gerardo “Lalo” Salazar, associate director of the Office of Evangelization and Catechesis, said, “This event is a miracle of God through community and organization and prayers of our volunteers.”

One of his volunteers, Maria Balderas of St. Charles Borromeo in Houston, said, “This is one of the best – we share our music, our culture and our faith in God with others!”

Julie Blevins, director of the Office of Evangelization and Catechesis, said, “Agape is a unique evangelization outreach to the rapidly growing Hispanic Catholic community of our archdiocese.”

She added, “We hope those who attended Agape encountered Jesus Christ and will continue to grow in their knowledge and love of him. This is the largest event of the many events of our office. We are hoping to provide a similar evangelization experience in English.”