Be 'faithful witnesses' to your call, Cardinal DiNardo says at Chrism Mass 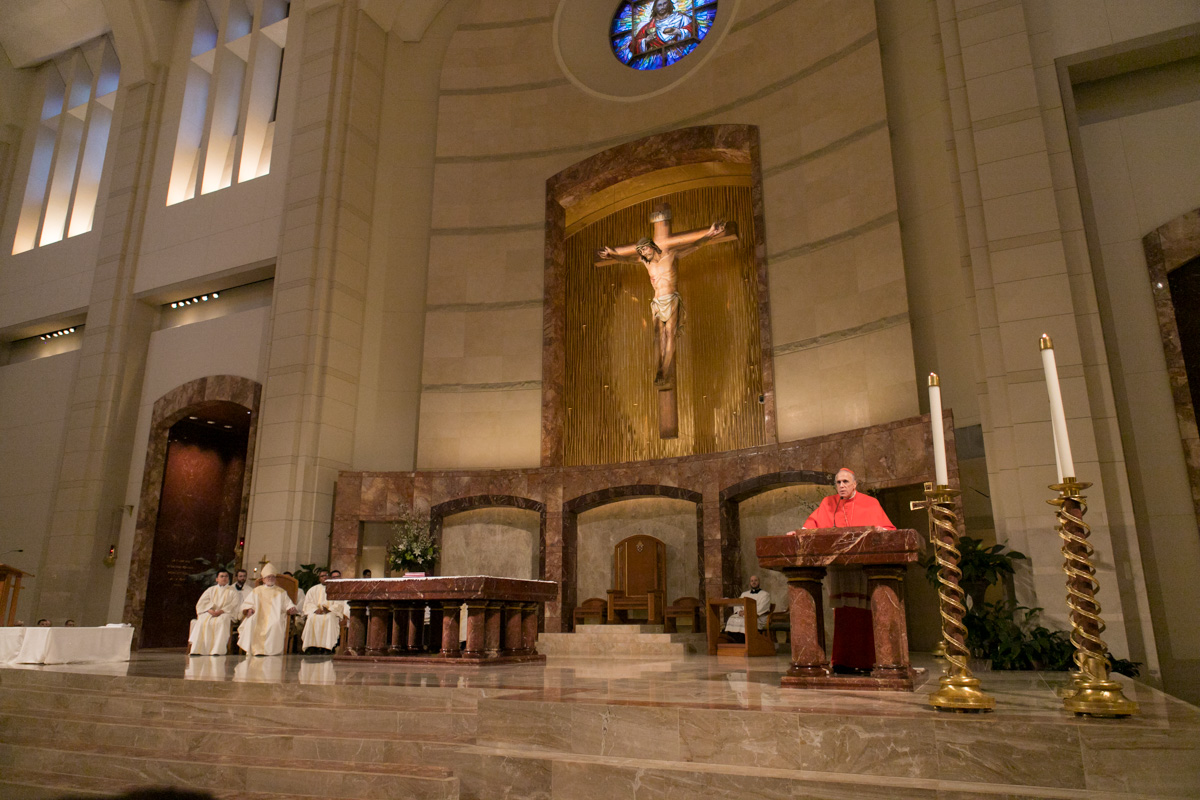 Daniel Cardinal DiNardo preaches the homily at the annual Chrism Mass at the Co-Cathedral of the Sacred Heart, April 16. The occasion marked Cardinal DiNardo’s first public appearance since suffering a mild stroke on March 15. Auxiliary Bishop George Sheltz served as the principal Mass celebrant. Every year during Holy Week, the faithful of the Archdiocese of Galveston-Houston are invited to gather for the celebration of the Chrism Mass – one of the most solemn and significant events of the liturgical year. (Photo by James Ramos/Texas Catholic Herald.)

HOUSTON — Every year during Holy Week, the faithful of the Archdiocese of Galveston-Houston gather at the Co-Cathedral of the Sacred Heart in Houston for the celebration of the Chrism Mass — one of the most solemn and significant events of the liturgical year.

On Tuesday, April 16, at least 1,725 faithful attended the Mass presided by Auxiliary Bishop George A. Sheltz to witness when all of the oils used in sacramental ministry throughout the 10-county Galveston-Houston Archdiocese were blessed and the Sacred Chrism was consecrated by Bishop Sheltz.

Daniel Cardinal DiNardo preached the homily for the Mass and attended the entirety of the hours-long Mass in choir. The Chrism Mass was his first public-facing ministry appearance since suffering a mild stroke March 15 while leading the Stations of the Cross at the very same Co-Cathedral.

Hundreds of priests from the Archdiocese joined Archbishop Emeritus Joseph A. Fiorenza in concelebrating the Mass. The priests also renewed their promises at this Mass. Approximately 50 gallons of oil were blessed with the consecrated Chrism.

At the start of the Mass, Bishop Sheltz thanked Cardinal DiNardo, who typically presides over the Chrism Mass, for allowing him to be the celebrant for the “beautiful celebration.” Bishop Sheltz echoed the prayers of many around the world and said: “Our prayers are with you and we are blessed that you can be with us on this sacred occasion.” 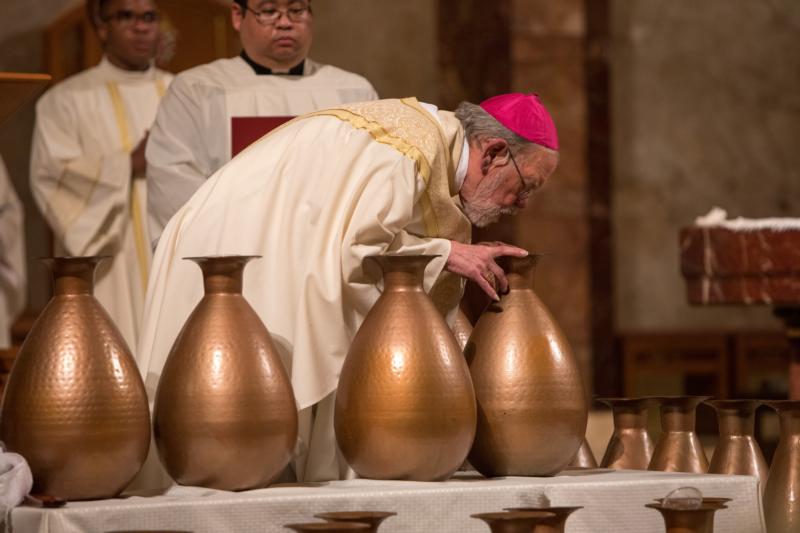 Bishop Sheltz said the Chrism Mass “is truly a beautiful night to gather in prayer” before Holy Week, “immersed in the mystery of our Lord’s passion and death so that we may be more intensely prepared to welcome His resurrection with great Easter joy.”

The Archdiocese said in an April 12 statement that Cardinal DiNardo was released April 5 from TIRR Memorial Hermann, an inpatient rehabilitation program in Houston’s Texas Medical Center following two weeks of therapy. He will continue outpatient therapy in the coming weeks.

In his homily, Cardinal DiNardo said the Chrism Mass was a sign of unity of the bishop and his priests, of priests with each other and of unity with the local Church.

He also said that he sent a message on behalf of the U.S. bishops, as well as the in the name of the Galveston-Houston Church, to the archbishop and people of Paris regarding the blaze at the Notre Dame Cathedral “for the incredible loss of that massive place of treasure and beauty.”

Cardinal DiNardo also thanked the congregation for their support and prayers during a time of “great crisis” with the clergy abuse scandal.

“Some of our priests are hurt. Many people are also hurt,” he said. “We are in a time of rebuilding and it is a time of anguish and a time of pain.”

“We are a priestly people, but a priestly people of service,” Cardinal DiNardo said. “In fact, we even ordain a whole group of men, deacons, so that they can constantly remind us that we are servants. If this is true for the priests, then it is true for all of us. A nation of priests who are servants are a people of praise. Maybe in our Church now, there needs to be more praise and repentance, so we can focus ourselves on the basics of what Jesus has done for us.”

“Jesus infuses into the oils the Spirit’s blessing, consecration and power.  These anointings, therefore, are actions and they signify genuine realities of healing, dedication and consolation.”

Following his mild stroke, Cardinal DiNardo received the Anointing of the Sick, which he called a “beautiful experience” that united him with “all the people who are ill.”

He admitted that he wasn’t yet fully recovered, but looked forward to being close with the Church during Holy Week, especially witnessing those who will be “plunged into the waters” and then confirmed at Easter Vigil. The Archdiocese was set to welcome 1,512 catechumens and 631 candidates into the local Church.

Cardinal DiNardo called the faithful to join him in encouraging “all our priests,” and to hold them to accountability.

He also said we must resolve “to march forward as faithful witnesses.”

“In light of that second reading, Jesus Christ is the faithful witness. If we are going to do anything, we’re going to have to be faithful witnesses,” he continued. “That is the only way the Church ever makes any headway. It’s not by all the other things we do. Faithful witness is what our call is: bishop, priest, deacon, religious or married, wherever our vows are.”