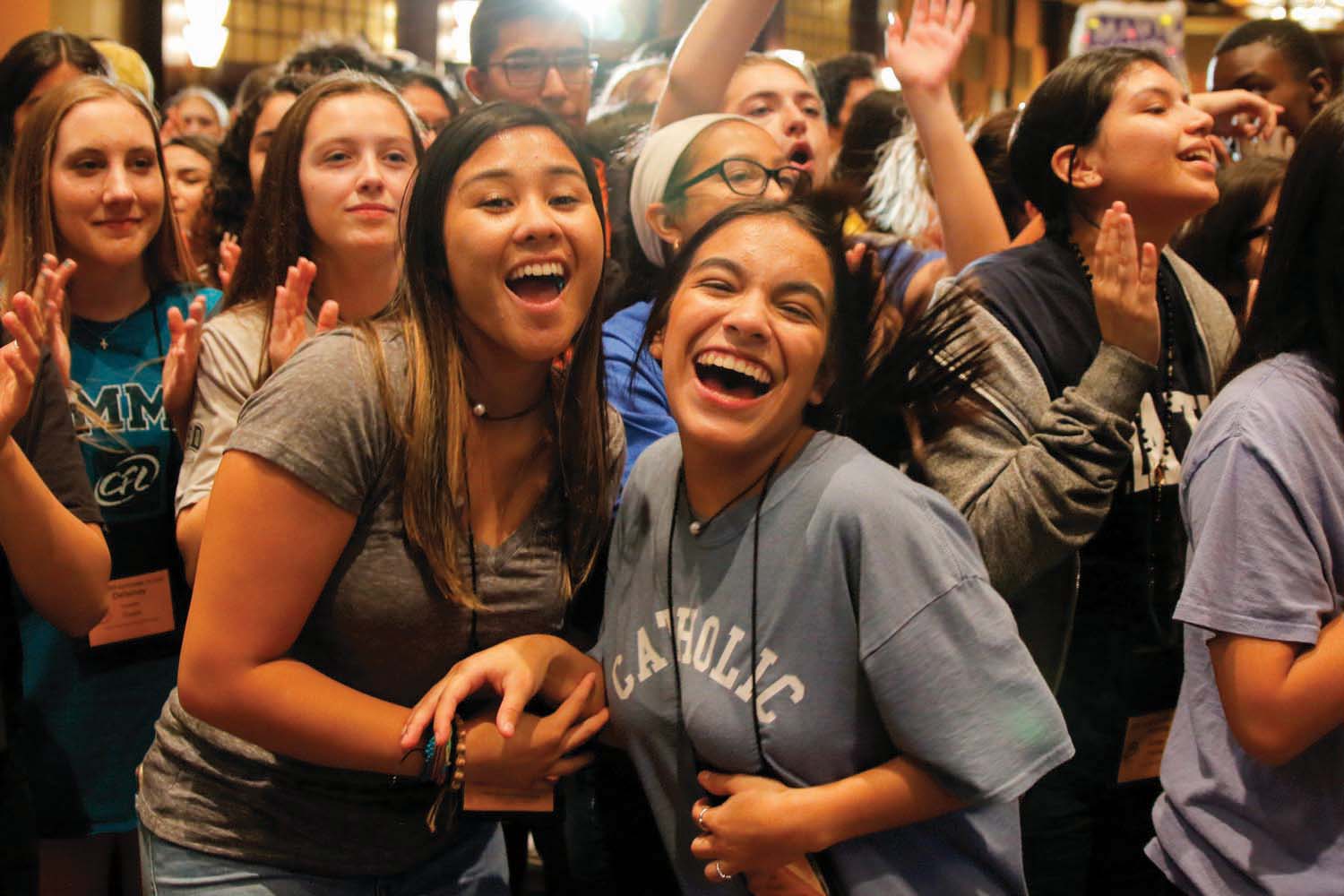 Through his close relationship with his grandfather, Patrick Pham realized he experienced and was pursued by the love of God the Father.

Throughout his childhood, Pham saw his grandfather play a significant role in his life, spending countless hours together. But when Pham lost his grandfather to cancer, Pham’s life changed.

He was frustrated, begging, “Why did I lose my best friend?” Pham missed their time together, the warmth of his grandfather’s hugs and care. In searching for peace, Pham found God.

The teenager found that God was stronger than death, and realized by offering his relationship with his grandfather up to God, by surrendering it all, Pham found God’s peace.

Pham, who shared his teenaged testimony alongside other youth, was one of many inspiring stories shared with thousands at the 2019 Archdiocesan Youth Conference (AYC) July 26 to July 28 at the Hilton Americas-Houston Hotel in downtown Houston.

Father Preston Quintela, parochial vicar at St. Cecilia Catholic Church in Houston, served as the conference’s chaplain, leading Eucharistic Adoration on Friday night. He joined Cardinal DiNardo and other priests from the Archdiocese in hearing confessions throughout the weekend.

At least 2,400 from the Archdiocese attended the annual conference, one of the largest diocesan-run youth events in the nation.

Organizers said some 93 parishes and youth groups attended the conference, with 800 to 900 young people receiving the Sacrament of Reconciliation that weekend.

AYC is the largest evangelizing event for older adolescents that the Office of Adolescent Catechesis and Evangelization (OACE) hosts annually.

Friday night included a prayer experience focused on Our Lady Undoer of Knots, who is said to be one of the pope’s favorite Marian devotions. The bilingual presentation explored how Mary’s intercession can help the youth in their faith journey to know God’s love and mercy in a greater way. It also revealed how Mary, through her Son Jesus Christ, never leaves the youth alone on their journey.

Saturday began with Mass celebrated by Father Quintela, followed by speaker and breakout sessions throughout the day. A second prayer experience also continued the focus on Mary, Our Lady Undoer of Knots.

Like the previous night, participants prayed for her intercession for their many challenges in their lives as they tied silken knots onto a grotto surrounding a statue of the Blessed Virgin Mary.

Prayers reflected themes of social justice, such as bullying, the death penalty, human trafficking, family life issues, immigration weaved a diverse array of intentions throughout the night. The evening concluded with Exposition and Adoration of the Blessed Sacrament with Vespers.

The next morning began with an OACE award recognition ceremony. Next, Cardinal DiNardo celebrated Mass with bilingual readings with young people.

In his homily, he encouraged the youth to never tire in their pursuit of holiness seen in the Gospels.

“Never underestimate what Jesus can do with someone who takes the Gospel seriously,” Cardinal DiNardo said.