Awakening young people to the call of priesthood, consecrated life 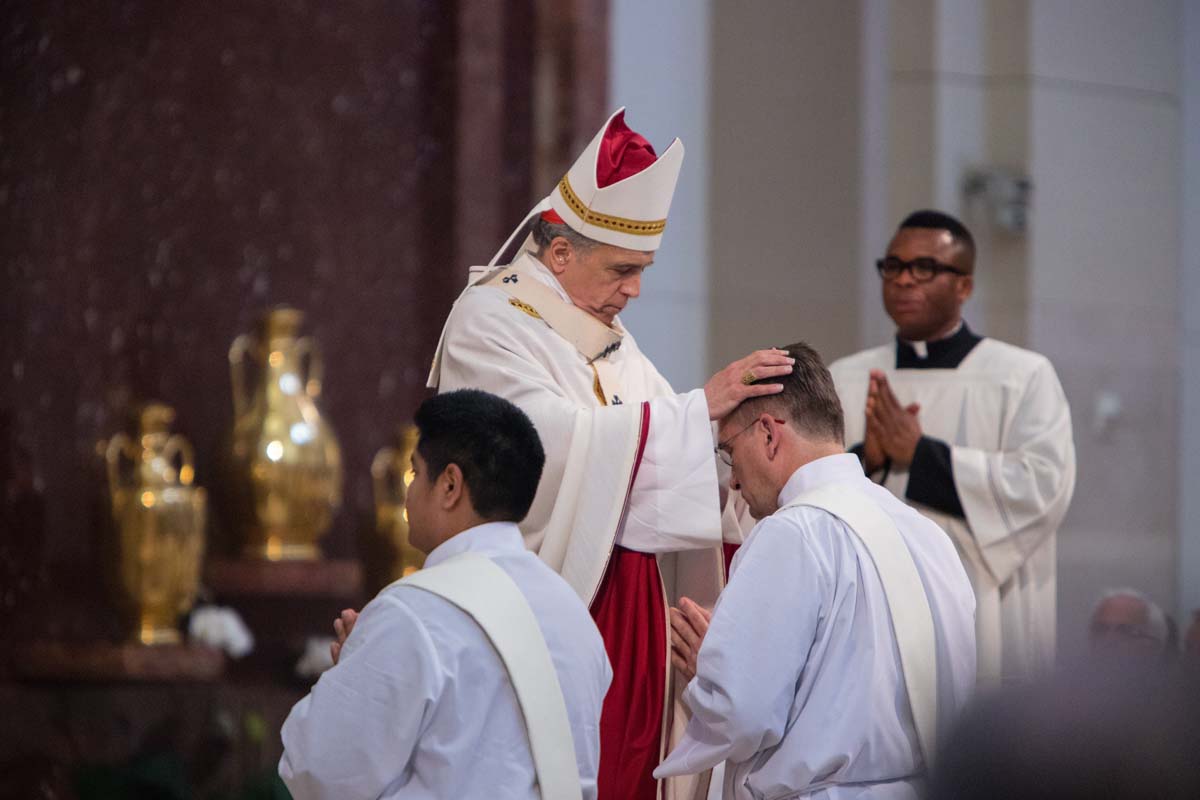 Daniel Cardinal DiNardo lays his hands on a then-Deacon Paul Foltyn during an Ordination Mass in 2018. Deacon Ricardo Arriola will soon be like Foltyn, who is now a priest, following his scheduled ordination in June. Both were assisted by the Office of Vocations. Photo by James Ramos/Herald.

HOUSTON — To help awaken the call of the Holy Spirit in the lives of young men and women discerning a vocation to the priesthood or consecrated life, the Office of Vocations of the Archdiocese creates a variety of spaces for them to encounter the Lord to discover His call in their lives.

Deacon Ricardo Arriola, a transitional deacon in his fourth year of theology at St. Mary’s Seminary with plans to be ordained to the priesthood in June, said he has personally witnessed the hard work and prayer the staff and volunteers of the Office of Vocations put into the mission of helping these young people give their lives to the Lord. 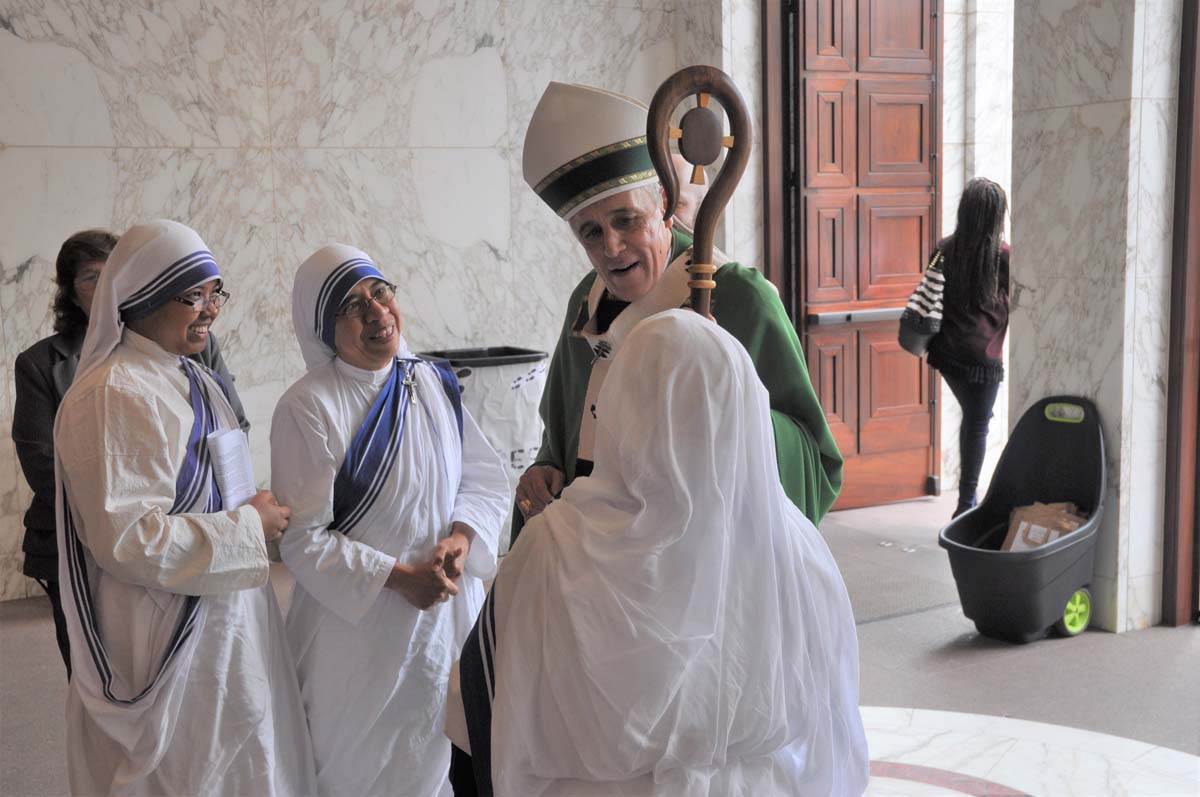 “The Office of Vocations is a group of creative individuals that are 100 percent docile to the movements of the Holy Spirit in finding ways to awaken young people to a meaningful life, lived for others,” said Deacon Arriola. “I will always be grateful to this ministry for its outstanding support throughout these years of formation.”

The Office of Vocations is one of 60 ministries supported by the Diocesan Services Fund (DSF).

Father Richard McNeillie, who became director of the Office of Vocations last summer, said despite the current scandals facing the Catholic Church, there are still many faithful young people in the Archdiocese that are already following Jesus and want to follow Him even more than before.

With 37 men currently enrolled in St. Mary’s Seminary, Father McNeillie said the faithful in the Archdiocese may not be aware that the Office of Vocations is responsible for the care of each seminarian while in formation along with the seminary. Together, they work together to provide personal, spiritual, academic and pastoral preparation of these men in discernment so they may become effective pastoral leaders who desire to serve the Church. St. Mary’s Seminary also serves as a location for diocesan meetings, workshops and seminars, which provide continuing theological education for all clergy.

Deacon Arriola said one of the best experiences of his life at St. Mary’s Seminary is the healthy community of seminarians who challenge and encourage each other to live holy lives and to follow the Lord wherever he may lead. He said the seminary schedule and formation opportunities allow the seminarians to have time for fellowship and grow in friendship, which, “…is good and pleasant when brothers dwell in unity.” (Ps. 133)

“I have had three vocations directors during my seven years in seminary: Father Dat, Father T.J., and now, Father Richard,” said Deacon Arriola. “All three have been truly present throughout my journey and have made themselves always available to meet with me and convey a genuine interest in my discernment. Each one has shared with me a vision of the priesthood that has motivated me to follow Christ.”

Deacon Arriola said his seminary experience also has been enriched by the liturgical formation offered at St. Mary’s Seminary.

“Praying with my brothers and being part of the seminary’s Liturgy team and the Schola Cantorum have definitely contributed to how I approach the Liturgy, seeing it as the ultimate encounter with our Lord and entering into His prayer with due reverence and an interior receptivity to grace,” said Deacon Arriola.

Another important aspect of his seminary experience has been his various summer assignments, which helped him to learn about different ministries and programs. He said one became very memorable and was filled with graces: “The Rome Experience.” 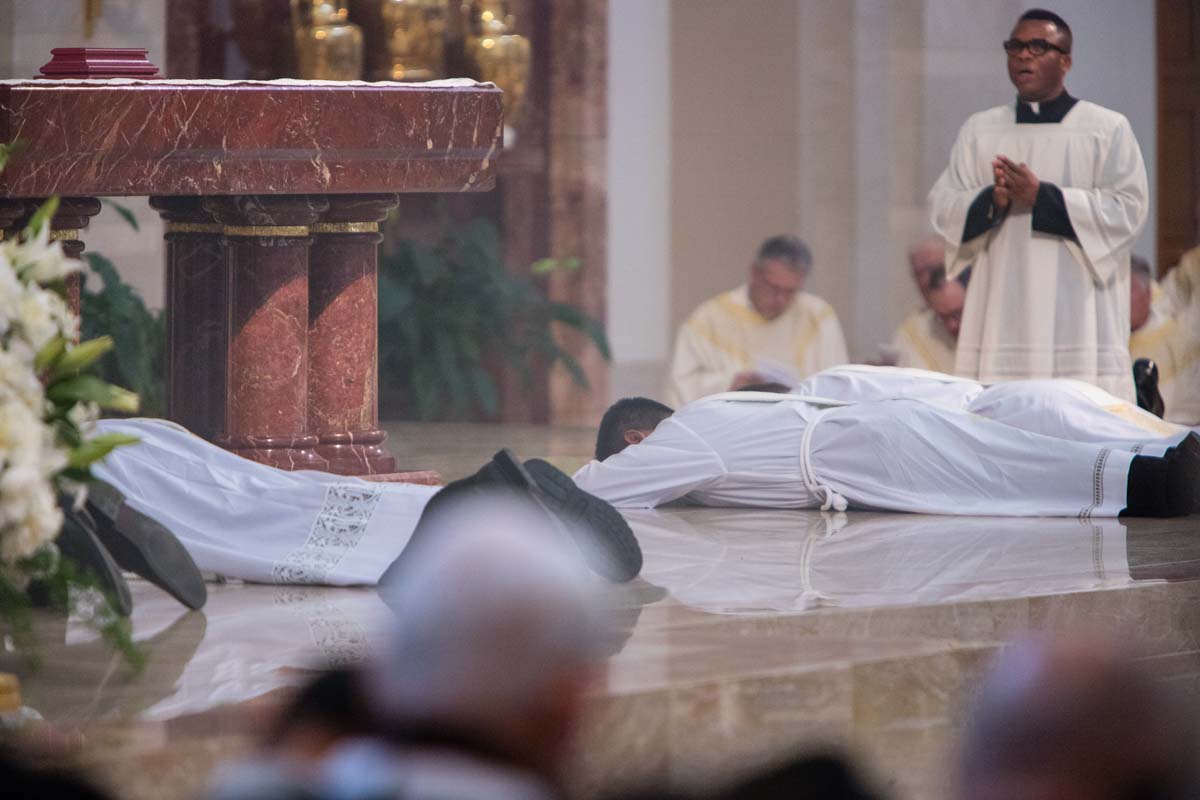 “For this program, 25 diocesan seminarians from around the U.S. spend six weeks in France, Spain and Rome, studying our rich Catholic tradition through the beauty of ancient buildings and history,” said Deacon Arriola. “The focus also is to gain a deeper understanding of priestly identity. I was the first seminarian from St. Mary’s to be sponsored to go and I know more seminarians will have the opportunity to live this unforgettable experience.”

Deacon Arriola said the Office of Vocations helped make this experience, as well as a Bible seminar at Mundelein Seminary, possible by finding sponsors to help finance the costs.

“When I presented these ideas, after careful discernment, the Office of Vocations accepted them and graciously helped me to make them happen,” said Deacon Arriola. “Also, as an international seminarian, I have received the proper support with my immigration status as a student. They have acknowledged the challenges that one has to make when living outside one’s country.”

Father McNeillie said he is grateful for supporters in the Archdiocese that contribute to the DSF, which he feels is the lifeline of the ministry’s operations.

“The Office of Vocations literally would not be able to pay for the seminarian’s education and formation without the DSF,” Father McNeillie said. “That’s the biggest item in our budget, and we need it for the future of priests in this local Archdiocese.”

Deacon Arriola said he would like all the faithful of the Archdiocese to understand how they can contribute to the formation of new priests and religious women by supporting the DSF. He said quality in formation naturally requires consistent financial support.

“The Office of Vocations offers good quality programs and retreats for discerners,” said Deacon Arriola. “I also personally benefited from the Life Awareness Retreat, which moved my heart toward the possibility that God was calling me to a supernatural vocation. Later, it was the Men’s Discernment Retreat at St. Mary’s that solidified my vocation and helped me to make the leap of faith.”